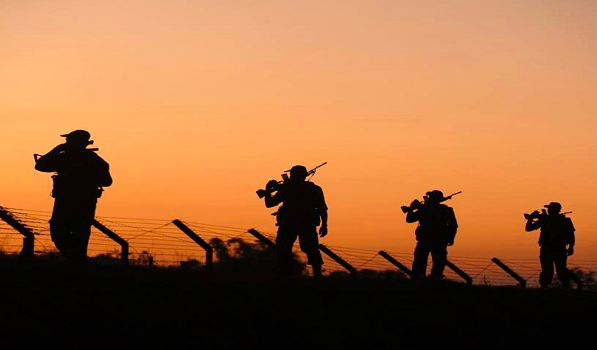 By George Friedman – GeopoliticalFutures: Israel said June 24 that 10 mortar shells had been fired from Syria and landed in the Israel-controlled part of the Golan Heights. Several more landed in the Golan the following day without causing any injuries or damage. In response, the Israelis carried out airstrikes on Syrian forces on the Syrian side of the Golan, reportedly destroying two Syrian tanks.
This is hardly unprecedented, but the Syrian regime has been careful not to allow its forces to fire into Israel, and the Israelis have avoided getting too entangled in Syria. They have limited their operations to airstrikes against Hezbollah, an Iranian-supported Lebanese force that Israel regards as a significant threat to its security. So an exchange like this is rare, and while it might be simply a Syrian mistake followed by an Israeli response, there is a sense that something might be changing.

Israel, Turkey and the United States want Syrian President Bashar Assad deposed. Russia and Iran support him. Both the U.S. and Israel were cautious about trying to topple Assad as long as IS was a significant force in the area. The view was that Assad in Damascus, even supported by Russia and Iran, was much less threatening than IS in Damascus. The U.S. and Israeli policy was to postpone dealing with Assad until after the Islamic State was dealt with. Turkey was more aggressive toward Assad but was content to let the war against IS play itself out.

It is premature to say the Islamic State has been beaten – especially with its remarkable record of recovering strength – but it is weaker than it has been in several years. Therefore, the question of Assad’s future is back on the table.

Assad, supported by two American adversaries, would be an American target independent of his many human rights violations. The United States wants to limit Iranian power in the Arab world, particularly in Syria and Lebanon. It is less concerned about the Russians, since their deployment has been less of a game-changer than sometimes presented. Nevertheless, U.S.-Russia relations are at a low point, and undoing Russia’s successes in Syria is attractive to the United States.
The Israelis have a strategic decision to make. They have substantial power to bring to bear against the Assad regime. But Israel’s strategy in recent years has been to avoid committing forces to the Syrian war because clear victory is unlikely and it cannot afford to get bogged down in an extended occupation. Assad represents Syria’s Alawites, a minority group that has had outsize power in the country for decades. The Alawites are bound to Assad by community but even more by the fear of what would happen to them if he were deposed. They would likely continue to resist even with him gone in order to retain autonomy and avoid being massacred by the other groups they have persecuted for so long.
From Israel’s point of view, the relatively clean conventional wars of 1973 and before have been replaced by a series of indecisive conflicts in Lebanon, and Israel has no appetite to try to reshape Syria. It can live more easily with Assad than with a quagmire, and with the United States operating there, Israel can allow events to take their course. Still, there was Syrian fire followed by Israeli airstrikes, and we can’t simply dismiss that as of no importance.

Let’s consider the broader strategic picture. Assume that the Islamic State is collapsing. In that case, Assad’s future may soon be back in question. That Assad has survived this long has less to do with Russia’s intervention and more to do with the reluctance of his enemies to act as long as IS was strong.
More important than Assad’s future, though, is the U.S.-Turkey relationship and, to a lesser extent, the Turkey-Israel relationship. This trilateral relationship once provided valuable stability for all three countries, but lately Turkey has drifted away. Turkey wants independence of action, and it would like to see Syria develop in a direction that benefits Turkey. The Americans and Israelis want to solidify their relationship with Turkey because it is the strongest Muslim power in the region. Like the U.S., Turkey is hostile toward Iran, and despite the games being played on both sides, it lacks a solid and predictable relationship with Russia.
It is in Turkey’s interest to find a way back to the stable trilateral relationship. Unlike Russia, which covets some of Turkey’s assets, the U.S. isn’t looking to take anything away, and both the Americans and the Israelis want to limit the strength of Iran, Turkey’s main competition in the region.

The relationship is frayed, but there are two things all three agree on: They oppose Iran, and they oppose Assad. If the Islamic State is out of the way, one way to bind the relationship together is a joint effort to topple Assad and, by doing so, to weaken Iran and Russia. Turkey and Israel may be ambivalent about Russia but not enough to override the desire to strike a blow against Iran.

This is, of course, all speculation stemming from a minor clash between Syria and Israel. But it is an occasion to lay out the future if IS were defeated. The Islamic State’s destruction would launch a new strategic reality in the region, with Assad at the heart of it and no longer able to hide behind being the better alternative to the Islamic State. Israel may not want to be involved in Syria, but it does want a strong relationship with Turkey and the United States. So when bullets and bombs are exchanged between Syria and Israel, it is always a reason to pay attention.