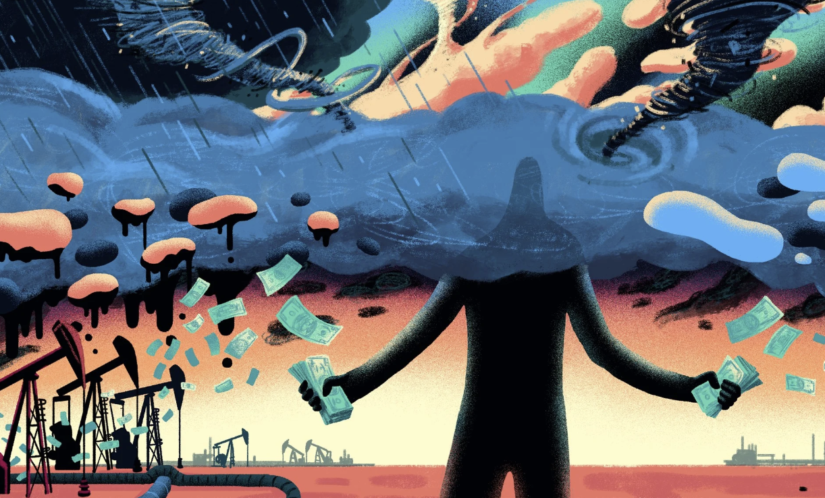 The climate crisis is now changing global finance – Graham Vanbergen asks;  do we want to pay for it now – or pay for it later?

In 2019, analysis found that the world’s largest investment banks provided more than $700bn of financing for the fossil fuel companies that were most aggressively expanding into new coal, oil and gas projects since the Paris (climate) Agreement in 2016.

Thirty-three powerful financial institutions have, between them provided an estimated total of $1.9tn to the fossil fuel sector between 2016 and 2018. For context, this is enough money to eradicate global poverty for a decade.

And one of the most prominent of those financiers has been led by the Wall Street giant JPMorgan Chase. It provided $75bn (67bn Euro) to companies expanding in energy sectors such as fracking and Arctic oil and gas exploration. Barclays, one of the most heavily invested, has provided $85bn (£65bn) of funding to fossil fuel firms and carbon-intensive projects.

In January, Barclays was formally challenged by some of its shareholders to stop financing fossil fuel companies that are driving the climate crisis, in the first resolution of its kind filed against a European bank. (1)

Eleven pension funds managing £130bn have filed the motion calling on Barclays to bring its activities into line with the Paris Agreement.

This is just the start of the ‘uncoupling’ of big finance and the fossil fuel industry.

Mark Carney, the outgoing Governor of the Bank of England recently said – financial firms had been too slow to reduce investment in fossil fuels and warned that many assets were at risk of being rendered “worthless” by the climate crisis. In December, the Bank of England then became the first central bank in the world to announce what it terms a banking stress test on climate change. If, for instance, a British bank loans money to a company building a coal-fired power plant, the BoE will require the bank concerned to hold a substantial amount of additional capital to cover the risks of the project being abandoned because of new regulations or other climate change-related factors. (2)

In the same way, if an insurance company has granted cover to houses on a flood plain, or to coastal properties which could be subject to rises in sea level, or mortgages granted on them – additional money needs to be set aside.

Echoing BoE warnings – environmental concerns dominated long-term global risks for business leaders, investors and policy-makers at Davos for the first time. Its annual risks survey put climate and other environmental threats ahead of risks posed by geopolitical tensions and cyberattacks. Even its 81-year-old founder Klaus Schwab, said the world is facing “a state of emergency.

After more than a year of grim scientific projections, environmental disasters and growing activism, world leaders and the public alike are increasingly recognising the severity and urgency of the climate crisis. Tipping the scales are organisations like Extinction Rebellion (XR), the fastest-growing political pressure group in the world and climate activist rockstars such as Greta Thunberg.

However, weighing heavily on the side of fossil fuel use is a global population that continues to grow. A population the size of Germany (80m or 1.1% pa) is added each year to our planet – putting even more pressure on energy resources. And research shows that we are on track to produce 120% more fossil fuels in 2030 than in 2020. At the same time, a recent survey found that climate breakdown is viewed as the most important issue facing the world, ahead of migration, terrorism and the global economy, in seven out of the eight countries surveyed.

XR’s motives are seemingly moral and justified. But climate pressure groups are more likely to galvanise investor-led change if they acknowledge the bitter truth. As the FT recently remarked – “Without fossil fuel energy – societal collapse and mass death is equally likely to occur if fossil-fuel producers are deprived of financing too quickly.” And here’s another truth – the global energy consumption trend is very closely aligned with global GDP growth and renewables simply can’t keep up. Worse still is that the climate crisis problem will never be resolved with existing renewable technology. Therefore, the real crisis to human existence is that even doing too much could lead to global societal collapse.

This is the dilemma. Do we kill the patient before coming up with a cure – or die waiting for it. From the competing predicament posed by fossil fuel use and the climate crisis, global economic losses from a rise in temperatures of 4 degrees celsius, the current trajectory, has been estimated at $23 trillion per year. Again, for context, this staggering number is twelve times current global military defence spending. (3)

Inevitably, this asset-cum-environmental catastrophe will soon pose two kinds of risks to the financial system: physical risk from natural disasters, and financial risks from transitioning away from fossil fuels.

Even if every country were to fulfil their current emissions reduction pledges from the Paris Agreement, we are still heading for a 3.2c increase in global temperatures. This is double the threshold before the climate crisis becomes a daily crisis for millions with trillions needed to be spent combating it.

According to the International Energy Agency, a third of the Earth’s electricity will come from renewables by 2024 (a surge by 50% globally in the next five years) – but we will still be “well short” of what’s required to meet anything like the targets set.

While nations are quickly adopting solar and wind, the IEA said coal is still expected to be the largest source of power globally in 2024. However, China is expected to overtake the EU as early as 2021 as the leader in solar panel use.

While the physical risks are calculable, it’s worth remembering that at least 16 insurance companies were bankrupted after Hurricane Andrew hit the USA in 1992 because they didn’t anticipate the magnitude of the damage. And mother nature has more lessons to teach us for our global indifference to her needs.

When Hurricane Dorian hit the Bahamas (population 395,000) last year, it was the worst natural disaster in that country’s history and is expected to cost $4bn ($10,125 per person) in insurance payouts. But this is dwarfed by the Australian bushfires. As at mid-January, economist John Quiggin at the University of Queensland put the total (tangible) cost at $100 billion, the costliest natural disaster in its history. Like Hurricane Andrew – both disasters were anticipated, the scale of them was not.

Columbia professor Adam Tooze estimated last year that of the total equity and fixed income assets in the world, as much as one-third are exposed as carbon-sensitive, and investors have increased their holdings in these assets significantly over the past three years. Potential losses from the value of carbon-sensitive assets are now estimated to be valued at $18 trillion. (4)

Whatever happens, the transition either now or when it’s too late will be painful and extremely costly. One could argue, not as costly as the loss of human life, but reality tells us that won’t win the debate. Part of the problem is that what we are facing is unknown and therefore its calculations are estimates, not foregone conclusions, which fuels the rhetoric of the climate science deniers.

World leaders and financial regulators can play a significant role in protecting the planet by helping to provide a workable solution in preventing systemic risk. In so doing, the transition to renewables would be quicker and ultimately less painful.