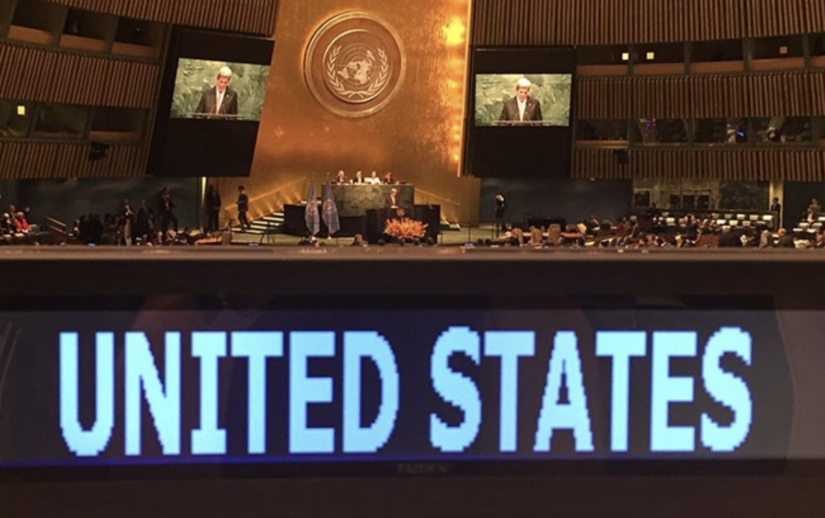 TruePublica Editor: This is what Trump wants, it’s what the far-right wants, it’s what Dominic Cummings, Boris Johnson’s techno-Stalinist advisor of chaos has wet dreams about. It’s what corporations want and it’s what billionaires want. They want to see the fall of the United Nations. They dream of undermining the ultimate global institution that upholds civil society because rules do not fit their agenda – especially rules constructed in an era of social democracy. Donald Trump’s administration has refused to pay America’s contribution to the UN causing a 67% hole in total monies owed to explode. Trump has told the UN to go find the money elsewhere and with little warning, it is now facing insolvency. This is should be of grave concern. The UN serves the world in all sorts of ways. Almost 92 million people receive food parcels for survival, it provides 45% of vaccines to children in the world and protects 72 million people fleeing war and persecution. It also has 50 diplomatic missions focused on preventing war and conflict – and is piling the pressure on governments to concede that the climate crisis is real. Without the UN, the world will be a much worse place for us all. Here’s Naomi Fowler from Tax Justice Network a few weeks back – where nothing has changed since.

By Naomi Fowler: Some troubling news you may not have heard about: recently United Nations staff were informed that the United Nations will run out of money due to a 30% underpayment by member states, most notably the United States: if that nation paid what it owed, that would make up at least 60% of the total unpaid contributions for 2019. Here’s a tweet thread which purports to show the text of an email sent out to staff by the UN Secretary-General, António Guterres: 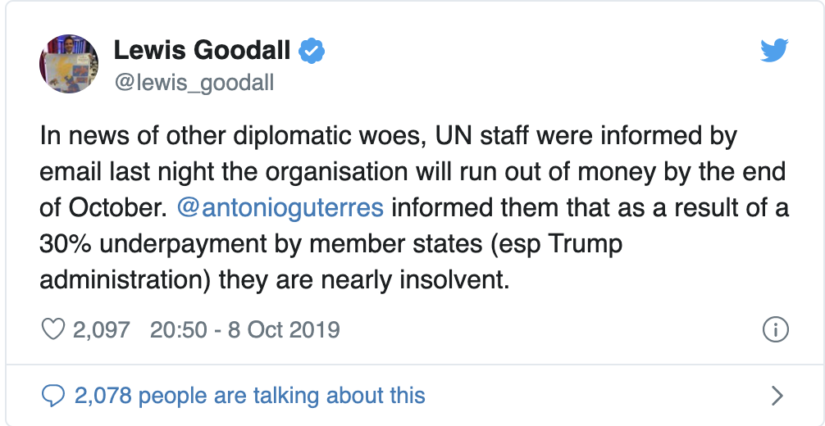 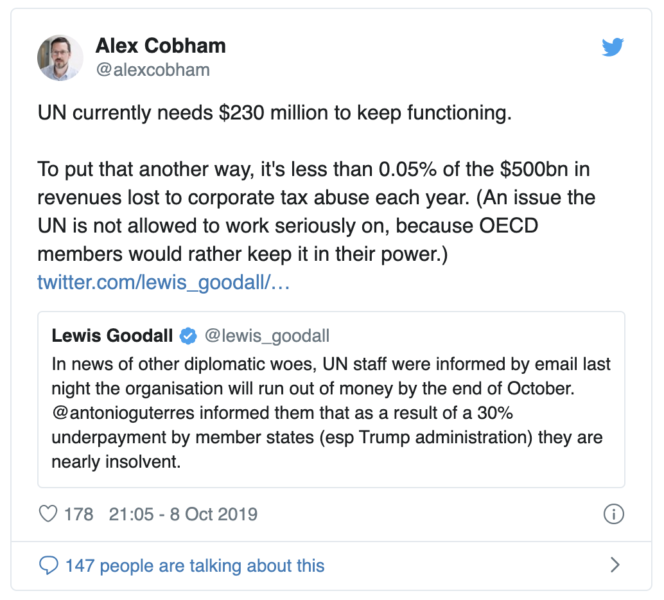 The United Nations Special Rapporteur on extreme poverty and human rights Professor Philip Alston raised the alarm on extreme inequality levels in the United States and in the UK. His evidence-based research was immediately rubbished by both the US administration and the UK government. Since President Trump was elected in the US, there has been a deliberate attempt to weaken an institution which has told some inconvenient truths to power.

We’re not saying that the UN is perfect. But we think it might interest citizens around the world to know whether or not their country has paid its 2019 contribution:

I interviewed Alex Cobham for the Tax Justice Network’s monthly podcast the Taxcast about his new book out this month, The Uncounted. We discussed this threat to the United Nations, and how a more stable future might be achieved.

“I don’t think very many people are actually seized of the urgency of this, I think because the UN seems very far away for most of us, but you know, there are two things at the moment that are really deeply concerning.

So on the one hand, you know, yes because of particularly the role of the US but actually quite a lot of other countries also not doing their bit, the UN is seriously underfunded and looking at having to make quite serious cuts. But actually because it’s only, only I say, missing a couple of hundred million dollars, right? Pretty small in terms of the national budget of lots of high income countries but big in terms of absolute amounts of money and you can see how that will impact very quickly on lots of people’s employment for example, but also on the organisation’s ability to do stuff.

But look, at the same time that the US in particular is effectively imposing deep cuts on the UN, the US is also blocking, in practical terms, all sorts of measures for progress and pushing through some quite regressive positions on things like women’s rights. How this country, or rather this country’s current administration, is being allowed both to starve the organisation of funds and to continue to exert a completely disproportionate amount of power is slightly mind-boggling.

And this doesn’t feel like a position that can continue. Surely it can do one or the other but not both. But ultimately what it points to in some ways is that we need to accelerate something that should have been happening anyway, which is thinking about how the UN becomes self sustaining.

It cannot survive, because good organisations do not survive on voluntary donations, because donations bring with them influence. And that’s as true for an organisation like the Tax Justice Network as it is for a government.

We know that governments that are more dependent on tax respond more to their own populations. Governments that have large natural resource wealth or aid flows become increasingly unresponsive to their people.

For the UN we need to think about countries making payments on a tax-like basis and with a social contract, countries having benefits that stem from their participation and therefore, you know, having some incentives to take part in that.

But, if the UN continues as I’m afraid it is currently, to look at private sector financing solutions for development and indeed, partnerships for itself, rather than seeing the literally hundreds of billions in revenues lost to avoidance and evasion as an obvious place for it to find the relatively small global budget that it needs, it’s kind of condemning itself to going further down this road.

I think that the people working on illicit financial flows need to start making the case very strongly within the UN that there are revenue streams here that would allow the organisation to have a basis of reserves, at least for a kind of independence that would stop it getting back into the situation that it’s got into now through the extreme behaviour of the Trump administration. Maybe there can be a silver lining if this kicks off some structural changes that make this impossible in future.

But right now everyone should be sounding the alert and asking their governments, their own governments, first of all, if they’ve made their contribution, because so many governments haven’t yet done their bit.”