Will Israel Finally Be Put On Trial For War Crimes?

An expected visit by ICC delegation could increase the risk of Israeli officials being tried for war crimes.

By Jonathan Cook – Israel has agreed to allow the International Criminal Court (ICC) in The Hague to send a delegation to Israel and the occupied territories, it was revealed at the weekend, in a step that could dramatically increase the risk of Israeli officials being tried for war crimes.

Emmanuel Nahshon, a foreign ministry spokesman, confirmed to Al Jazeera on Sunday that Israel had agreed to the visit in principle, though the “when and how” were still under discussion.

The ICC’s move comes as human rights groups have harshly criticised Israel for closing investigations into dozens of allegations that its military broke the laws of war during an attack on Gaza in the summer of 2014.

The Hague prosecutors are reportedly interested in examining how effective Israel’s legal mechanisms are in investigating allegations of war crimes.

Under the terms of its founding statute, the ICC could take over jurisdiction of such probes if it is persuaded that Israel is unable or unwilling to conduct credible investigations itself. 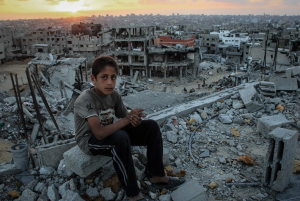 So far, only three Israeli soldiers have been indicted on a relatively minor charge – of looting – even though Israel’s 51-day offensive, named Protective Edge, in July and August 2014 resulted in some 2,250 Palestinian deaths. The vast majority were civilians, including 551 children.

The Israeli military exonerated itself late last month in 13 cases it had been investigating. These included lethal attacks on three Palestinian families, the shelling of a hospital and a United Nations shelter for civilians, and the bombing of Gaza’s main power plant. It declined to investigate another 80 complaints.

In response, UN Secretary-General Ban Ki-Moon criticised Israel for the “low rate of investigations opened into these serious allegations”.

Since Protective Edge, two of Israel’s largest human rights groups, B’Tselem and Yesh Din, have refused to cooperate with Israeli investigations in Gaza, accusing the Israeli military of using them to “whitewash” its actions.

In June, the New York-based monitoring group, Human Rights Watch (HRW), added to the pressure on the ICC, calling for it to open a formal investigation into the Gaza offensive.

The credibility of Israel’s probes has been further undermined by a report issued last week by two local human rights groups, Adalah and Al Mezan, based in Israel and Gaza respectively.

The report accused Israel of failing to examine properly the evidence they had collected relating to 27 suspected war crimes during the 2014 offensive. Five cases referred to Israeli attacks on UN schools sheltering civilians. Two years on, the groups noted, Israel had issued no indictments. Investigations, where they occurred, were “clearly flawed”.

Nadeem Shehadeh, a lawyer with Adalah, a legal centre for Palestinian citizens in Israel, told Al Jazeera the possibility of legal redress in many cases was close to “exhausted”.

“We have seen Israel conducting flawed investigations or dragging out the legal process with long delays,” he said. “The main aim appears to be to place obstacles in the way of the investigations so that Israel’s armed forces are not held accountable.”

Israel’s failure to conduct thorough and transparent inquiries could open the door to the ICC launching its own formal investigation, he said.

On Friday, an unnamed Israeli official tried to downplay the significance of the visit, telling the Haaretz daily: “We have nothing to hide.”

The official added that Israel would point out to the ICC that it “has neither the authority nor the justification to handle the Palestinians’ complaints”.

Nahshon told Al Jazeera: “The goal is to give the ICC a better grasp on Israel’s legal and judicial system.” However, he added, “That will make things easier if we move to another stage” – an apparent reference to the possibility that the ICC may consider launching a formal investigation.

Ghazi Hamad, a Palestinian official dealing with ICC matters, said the Palestinian Authority hoped that the visit would “speed up the opening of the investigation” by the court into Israel’s conduct during Protective Edge.

“That would provide a clear message to Israel that it cannot continue to commit crimes with impunity,” he told Al Jazeera. Hamad said the PA was not told whether the ICC had requested or was granted permission from Israel to access Gaza.

This is the first time Israel has agreed to cooperate with an international body over allegations that could ultimately lead to war crimes trials. Israel denied entry to UN commissions of inquiry in 2009 and 2014, following major offensives in Gaza.

Officials in Washington have repeatedly voiced their opposition to the ICC exercising jurisdiction over Israeli nationals. Neither the US nor Israel has ratified the Rome Statute, the document establishing The Hague court in 2002.

Sari Bashi, director of the Israel-Palestine branch of HRW, said Israel’s continuing restrictions on human rights organisations entering Gaza had further undermined the credibility of Israel’s investigations. The strict controls had made it “more difficult for [the groups] to do their jobs and to bring relevant information to light”, she told Al Jazeera.

Israeli authorities, she added, had previously conceded that human rights groups played an important role in helping to “overcome the fear that Palestinian residents have of meeting [Israeli military] personnel.”

Al Mezan and Adalah said that, in many cases, Israel had refused to speak to any witnesses outside the military before it dropped inquiries into suspected war crimes.

Israel has received a total of 500 complaints relating to 360 incidents in Gaza in which there are suspicions of violations of international law.

So far, only a handful of investigations have been opened, relating mainly to physical assaults on civilians, “unlawful firing” at buildings, and looting. On August 24, Israel announced the closure of more than 93 cases. In 80 cases, no formal investigation was conducted.

Two years on, Israel is still undecided whether to scrutinise some of the most contentious phases of its offensive, including the massive bombardment of Rafah to prevent an Israeli soldier from being taken prisoner. The incident, known as Black Friday, is believed to have killed more than 100 Palestinian residents of the area.

A Pléiades satellite image of eastern Rafah, taken on 14 August 2014 at 11.50am, is marked with air strike craters (large red dots) and artillery craters

“We hope these materials and others are raising doubts in the minds of the ICC’s prosecutors about the seriousness with which Israel is handling its investigations,” she told Al Jazeera.

Hamad said that the Palestinian foreign minister, Riad al-Malki, had met the ICC prosecutor, Fatou Bensouda, in The Hague on Friday to promise any help the court might need to launch a formal investigation.

The ICC is currently conducting a “preliminary inquiry” to examine whether an investigation is warranted into suspected violations of international law, either by Israel or Palestinian factions.

Protective Edge is the first major offensive against the Palestinians over which The Hague court has potential jurisdiction. In ratifying the Rome Statute last year, the Palestinians gave the ICC authority from June 2014, a month before Israel’s attack on Gaza.

Among the investigations Israel closed last month was one looking into the shelling of a UN school in Rafah that was serving as a temporary shelter for 3,000 Palestinians. Some 12 to 15 civilians, including eight children, were killed and at least 25 injured. Chris Gunness, a UN spokesman in Jerusalem, told Al Jazeera that Israel had been given the school’s coordinates and was warned on 33 separate occasions of its role as a shelter, the last time being an hour before the attack.

Human rights groups have challenged Israel’s claims that the school was hit because militants riding a motorbike changed course towards the school after a missile had been fired at them. Al Mezan’s testimonies suggest that the riders were civilians and should not have been targeted. HRW, meanwhile, discovered that the type of munition Israel used could have been diverted when it was clear it would explode near the school.

Adalah and Al Mezan said Israeli authorities had refused to divulge the basis for most of their decisions either to exonerate soldiers or refuse the opening of investigations, claiming the evidence was classified.

Human rights groups have criticised the closing of other investigations. In June, inquiries were dropped against Neria Yeshurun, a brigade commander who had admitted to ordering the shelling of a medical clinic “to raise morale”, apparently in revenge after one of his officers was killed. Yeshurun was reprimanded instead.

In another controversial case, Israel closed an investigation in June 2015 into the killing of four boys as they played football on a beach, close to hotels where foreign reporters were based. Shehadeh said Adalah, which supplied testimonies to Israel about the boys’ deaths, had immediately appealed the decision to Israel’s attorney general but had heard nothing for more than a year.

In May, leading Israeli human rights group B’Tselem said it would no longer submit complaints to the Israeli authorities. It said it was pointless to work “with a system whose real function is measured by its ability to continue to successfully cover up”.

(Main image – Israel’s Ambassador to the UN Eviatar Manor listens to a statement at the United Nations Human Rights Council at the UN headquarters in Geneva, Switzerland)

Jonathan Cook is an award-winning British journalist based in Nazareth, Israel, since 2001. “Jonathan Cook’s work on Palestine and Israel, especially his de-coding of official propaganda and his outstanding analysis of events often obfuscated in the mainstream, has made him one of the reliable truth-tellers in the Middle East.” Jonathan’s website is HERE