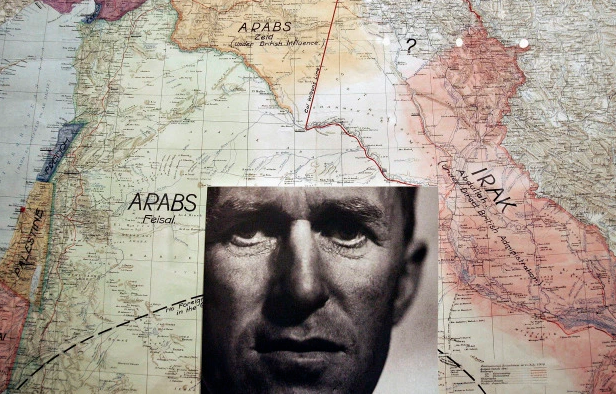 By Mark Curtis – Why the West’s World War One carve-up is still unfinished business. One hundred years ago this month, the guns of the European powers may well have fallen silent after four years of war. But in the Middle East, many of those same powers were creating the conditions for a century of further conflict. Decisions taken in London and Paris above all, during and immediately after the First World War, are continuing to have momentous consequences, but ones which barely figure in commemorations of 1918.

For most people, the armistice commemorates the end of the war in Western Europe. But in the East, the partitioning of the Ottoman Empire was being determined during the First World War before its capital, Constantinople, was occupied by British and French troops in November 1918.

The best-known of the secret plans to transform the region – the Sykes-Picot agreement of May 1916, named after the British and French representatives who drew up the agreement – divided up the Arab territories of the Ottoman Empire into spheres of influence in which Britain allocated itself most of Iraq, Jordan and parts of Palestine, while France took southeastern Turkey, Syria and Lebanon.

The British aim was to control the Middle East by keeping it divided. One month after the Sykes-Picot agreement, in June 1916, the Arab revolt under Sharif Hussein broke out against Ottoman rule in Arabia, backed by British money and advisers, famously including Colonel TE Lawrence, who was known as “Lawrence of Arabia”.

Britain’s abandonment of its commitment to Ottoman territorial integrity was frankly explained by Lawrence in an intelligence memo in January 1916.

He stated that the Arab revolt was “beneficial to us because it marches with our immediate aims, the break up of the Islamic ‘bloc’ and the defeat and disruption of the Ottoman Empire … The Arabs are even less stable than the Turks. If properly handled they would remain in a state of political mosaic, a tissue of small jealous principalities incapable of cohesion.”

After the war, Lawrence wrote another report, this time for the British Cabinet, entitled “Reconstruction of Arabia,” in which he noted that Sharif Hussein “was chosen because of the rift he would create in Islam”. Lawrence also called for “the creation of a ring of client states, themselves insisting on our patronage, to turn the present and future flank of any foreign power with designs on the three rivers [Iraq]”.

The benefit of dividing Arabia was also recognised by the British government of India: “What we want,” it stated, “is not a united Arabia, but a weak and disunited Arabia, split up into little principalities so far as possible under our suzerainty – but incapable of coordinated action against us, forming a buffer against the powers in the West”.

In this schema, the new state of Saudi Arabia would emerge as the main British bulwark for influence in Arabia and the wider region.

This desire for an arbitrary “political mosaic” of jealous, competing nations in the Middle East acting as “client states” of Britain and the West has been as long-lasting as it has been catastrophic. While British and French “mandates” and rule over the territories allocated under the Sykes-Picot plan formally ended in the 1930s and 1940s, their impacts were much longer lasting.

The “lines in the sand” drawn by ministers contributed to the creation of states such as Syria and Iraq that have largely been kept together through brute force.

But while some territories were fortunate to gain “independence,” others lost out completely, again depending largely on the interests of the great powers. Palestinians and Kurds lost the most, being denied the prospect of achieving nationhood and whose plight explains much of the violence the region has suffered from ever since.

For a brief period the Kurds might have been more fortunate. In 1920, the Treaty of Sevres held out the potential for a Kurdish territory subject to a referendum, but the Turkish war of independence led to a new international agreement in 1923, the Treaty of Lausanne, in which the Kurdish region of eastern Anatolia was appended to the new Turkish state instead. Kurds were thus dispersed across Turkey, Iraq, Syria and Iran.

When Saddam Hussein’s Iraq attempted to destroy the Kurds in the north of the country in the 1980s, using chemical weapons in the process, it was a result of the failure to make provision for Kurdish nationhood going back to the 1920s.

Saddam’s terrible “Anfal” campaign, which killed tens of thousands of Kurds, was a repeat of similar campaigns by the president’s predecessors in the decades before.

In 1963-65, for example, another regime in Baghdad sought to brutally crush Kurdish nationalism, all the while receiving secret arms supplies and backing from the British government, an episode written out of British (but not Kurdish) history.

The Palestinian and Kurdish struggles of today are not going to disappear until there is a broad transformation in the state system in the Middle East that redresses the inequities imposed 100 years ago. Yet if the present great powers are going to continue to reject these calls, the ongoing instability is likely to produce more nefarious forces that have other ideas.

When the terrorists of Islamic State (IS) swept through Iraq and Syria in 2014, taking over huge swathes of territory and declaring a caliphate across the two countries, they defied the borders drawn up by imperialists of a previous era.

To an extent, IS is the product of that failed Middle East state system which largely has not delivered for its people and at times all-too-easily defines itself in opposition to reactionary Western forces.

It is obviously not the case that all, or even most, of the Middle East’s conflicts are the result of past imperialist border making – but some of the most deep-rooted are. If the Middle East is to avoid a century of further conflict, progressive forces in the region must work together in an ambitious attempt to reshape it in the interests of its people.

This means re-looking at some existing borders, facilitating the emergence of new states and reforming, if not emasculating, some of the states which benefitted from the West’s past imperialism and which often still promote it.