Assange extradition – Evidence of a CIA kidnap plot emerges, denial of legal privilege and now a closed court without scrutiny 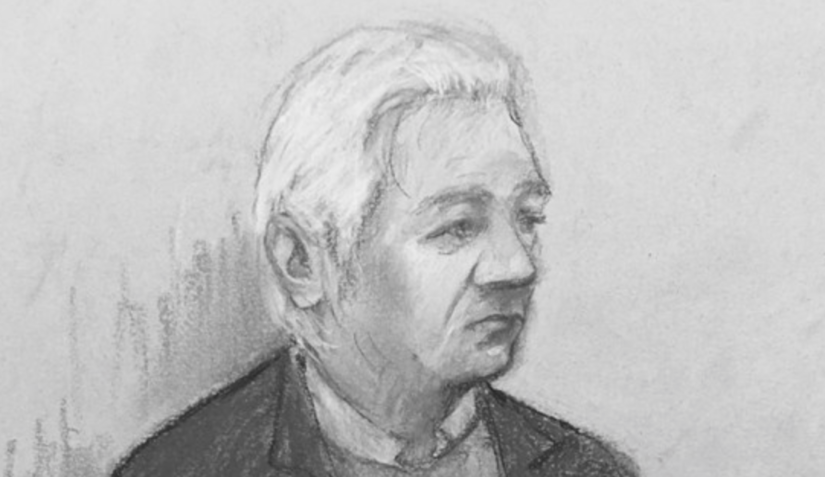 TruePublica Editor: This account of the recent court case involving Julian’ Assange’s extradition to the United States is one of the most extraordinary pieces of text I have ever read. It is written by former UK ambassador, now human rights activist Craig Murray who was present throughout the proceedings and at Assange’s side. Leaving aside the fact that Assange has been treated by the British authorities as a despot state would an enemy combatant – exposed here, as evidence submitted to the court is an internationally coordinated plot by the CIA to kidnap Assange. Additionally, legal privilege (privacy from surveillance, spying and/or interception) between Assange and his legal team, and due legal process have clearly been denied. It is clear that the American’s are directing this sham court with its second hearing now moved from an open magistrates court to a closed one in Belmarsh prison, where supporters and journalists will not be present. In this environment, it is clear that Assange will not be granted the right to any form of justice in Britain. Assange is a political prisoner, soon to be extradited and incarcerated in an American hellhole where he faces multiple lifetime sentences and human rights abuses. Reading this text demonstrates beyond any doubt that Britain is merely a client subservient state of America.

The reasons given by Assange’s defence team for more time to prepare were both compelling and startling. They had very limited access to their client in jail and had not been permitted to hand him any documents about the case until one week ago. He had also only just been given limited computer access, and all his relevant records and materials had been seized from the Ecuadorean Embassy by the US Government; he had no access to his own materials for the purpose of preparing his defence.

“his relevant records and materials had been seized from the Ecuadorean Embassy by the US Government; he had no access to his own materials for the purpose of preparing his defence.”

Furthermore, the defence argued, they were in touch with the Spanish courts about a very important and relevant legal case in Madrid which would provide vital evidence. It showed that the CIA had been directly ordering spying on Julian in the Embassy through a Spanish company, UC Global, contracted to provide security there. Crucially this included spying on privileged conversations between Assange and his lawyers discussing his defence against these extradition proceedings, which had been in train in the USA since 2010. In any normal process, that fact would in itself be sufficient to have the extradition proceedings dismissed. Incidentally, I learnt on Sunday that the Spanish material produced in court, which had been commissioned by the CIA, specifically includes high-resolution video coverage of Julian and I discussing various matters.

The evidence to the Spanish court also included a CIA plot to kidnap Assange, which went to the US authorities’ attitude to lawfulness in his case and the treatment he might expect in the United States. Julian’s team explained that the Spanish legal process was happening now and the evidence from it would be extremely important, but it might not be finished and thus the evidence not fully validated and available in time for the current proposed timetable for the Assange extradition hearings.

For the prosecution, James Lewis QC stated that the government strongly opposed any delay being given for the defence to prepare, and strongly opposed any separate consideration of the question of whether the charge was a political offence excluded by the extradition treaty. Baraitser took her cue from Lewis and stated categorically that the date for the extradition hearing, 25 February, could not be changed. She was open to changes in dates for submission of evidence and responses before this, and called a ten-minute recess for the prosecution and defence to agree these steps.

What happened next was very instructive. There were five representatives of the US government present (initially three, and two more arrived in the course of the hearing), seated at desks behind the lawyers in court. The prosecution lawyers immediately went into huddle with the US representatives, then went outside the courtroom with them, to decide how to respond on the dates.

After the recess, the defence team stated they could not, in their professional opinion, adequately prepare if the hearing date were kept to February, but within Baraitser’s instruction to do so they nevertheless outlined a proposed timetable on delivery of evidence. In responding to this, Lewis’ junior counsel scurried to the back of the court to consult the Americans again while Lewis actually told the judge he was “taking instructions from those behind”. It is important to note that as he said this, it was not the UK Attorney-General’s office who were being consulted but the US Embassy. Lewis received his American instructions and agreed that the defence might have two months to prepare their evidence (they had said they needed an absolute minimum of three) but the February hearing date may not be moved. Baraitser gave a ruling agreeing everything Lewis had said.

At this stage, it was unclear why we were sitting through this farce. The US government was dictating its instructions to Lewis, who was relaying those instructions to Baraitser, who was ruling them as her legal decision. The charade might as well have been cut and the US government simply sat on the bench to control the whole process. Nobody could sit there and believe they were in any part of a genuine legal process or that Baraitser was giving a moment’s consideration to the arguments of the defence. Her facial expressions on the few occasions she looked at the defence ranged from contempt through boredom to sarcasm. When she looked at Lewis she was attentive, open and warm.

The extradition is plainly being rushed through in accordance with a Washington dictated timetable. Apart from a desire to pre-empt the Spanish court providing evidence on CIA activity in sabotaging the defence, what makes the February date so important to the USA? I would welcome any thoughts.

Baraitser dismissed the defence’s request for a separate prior hearing to consider whether the extradition treaty applied at all, without bothering to give any reason why (possibly she had not properly memorised what Lewis had been instructing her to agree with). Yet this is Article 4 of the UK/US Extradition Treaty 2007 in full:

On the face of it, what Assange is accused of is the very definition of a political offence – if this is not, then what is? It is not covered by any of the exceptions from that listed. There is every reason to consider whether this charge is excluded by the extradition treaty, and to do so before the long and very costly process of considering all the evidence should the treaty apply. But Baraitser simply dismissed the argument out of hand.

Just in case anybody was left in any doubt as to what was happening here, Lewis then stood up and suggested that the defence should not be allowed to waste the court’s time with a lot of arguments. All arguments for the substantive hearing should be given in writing in advance and a “guillotine should be applied” (his exact words) to arguments and witnesses in court, perhaps of five hours for the defence. The defence had suggested they would need more than the scheduled five days to present their case. Lewis countered that the entire hearing should be over in two days. Baraitser said this was not procedurally the correct moment to agree this but she will consider it once she had received the evidence bundles.

Plainly the authorities were disconcerted by the hundreds of good people who had turned up to support Julian. They hoped that far fewer will get to the much less accessible Belmarsh. I am fairly certain (and recall I had a long career as a diplomat) that the two extra American government officials who arrived halfway through proceedings were armed security personnel, brought in because of alarm at the number of protestors around a hearing in which were present senior US officials. The move to Belmarsh may be an American initiative.

Assange’s defence team objected strenuously to the move to Belmarsh, in particular on the grounds that there are no conference rooms available there to consult their client and they have very inadequate access to him in the jail. Baraitser dismissed their objection offhand and with a very definite smirk.

Finally, Baraitser turned to Julian and ordered him to stand, and asked him if he had understood the proceedings. He replied in the negative, said that he could not think, and gave every appearance of disorientation. Then he seemed to find an inner strength, drew himself up a little, and said:

“I do not understand how this process is equitable. This superpower had 10 years to prepare for this case and I can’t even access my writings. It is very difficult, where I am, to do anything. These people have unlimited resources.”

The effort then seemed to become too much, his voice dropped and he became increasingly confused and incoherent. He spoke of whistleblowers and publishers being labelled enemies of the people, then spoke about his children’s DNA being stolen and of being spied on in his meetings with his psychologist. I am not suggesting at all that Julian was wrong about these points, but he could not properly frame nor articulate them. He was plainly not himself, very ill and it was just horribly painful to watch. Baraitser showed neither sympathy nor the least concern. She tartly observed that if he could not understand what had happened, his lawyers could explain it to him, and she swept out of court.

Baraitser then capped it all by saying the February hearing will be held, not at the comparatively open and accessible Westminster Magistrates Court where we were, but at Belmarsh Magistrates Court, the grim high security facility used for preliminary legal processing of terrorists, attached to the maximum-security prison where Assange is being held. There are only six seats for the public in even the largest court at Belmarsh, and the object is plainly to evade public scrutiny and make sure that Baraitser is not exposed in public again to a genuine account of her proceedings, like this one you are reading. I will probably be unable to get in to the substantive hearing at Belmarsh.