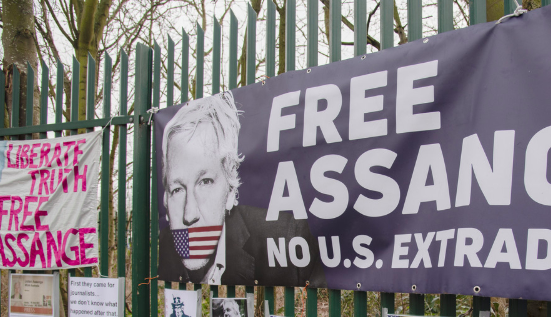 By TruePublica Editor: Anyone following this case will know that justice is not the intention of the British state when it comes to Julian Assange and his impending extradition to the United States. What we are witnessing, if you can call it that – is the operation of a kangaroo court. This type of court is a court that ignores recognised standards of law or justice. The defendants in such courts are often denied access to legal representation and, in some cases, proper defence whilst prejudicial bias is a constant. Such proceedings are often held to give the appearance of a fair and just trial, even though the verdict is already decided before the trial actually begins. These are the conditions of one of the most important court cases currently underway in British legal history.

There’s an irony for Assange standing in this court, widely regarded by many, as being little more than a travesty of justice. The term kangaroo court is often erroneously believed to have its origin from the courts of Australia’s penal colonies when in fact, the first published instance of the term comes from America. The term is believed to relate to ‘jumping over and intentionally ignoring evidence’. Again, it is apparent, that these are the conditions of the case against Assange.

Leaving aside the evidence and interpretations of Julian Assange’s journey from the origins of WikiLeaks to the court case at Woolwich Crown Court in London right now – Assange is being subjected to what is evidently a show trial.

For all of the legal complexities of this case – the United States government has laid out its extradition case against Julian Assange, the WikiLeaks founder, in court on Monday – by arguing that he had put lives at risk and was no better than an “ordinary” criminal.

“Reporting or journalism is not an excuse for criminal activities or a license to break ordinary criminal laws,” James Lewis, a lawyer representing the U.S. government, told the court.

For a ‘journalist’ to have broken ‘ordinary criminal laws’, Assange has been treated no different in Britain than America would have conducted themselves having caught their No1 most wanted terrorist target. Widely reported, Assange has been subjected to conditions in Britain considered by the UN as torture, along with various other personal abuses – and just as bad, a denial of proper legal procedures designed to weaken both Assange and the defence team.

In the early 1960s, Lord Bigham, the emanate British judge, Law Chief Justice and Senior Law Lord wrote – “people commonly assert that British justice is the finest in the world’ and warned about other systems such as – “In France, where you’re guilty till proved innocent”. Bigham proudly espoused that “the foundations of British justice were underpinned with – Magna Carta as a source of fundamental rights, habeas corpus, the rule of law, the system of precedent, jury trial, the absence of torture, the method of proof and rules of evidence, and the superiority of English judges.”

Sixty years later the judicial system in Britain stands in the dock in front of the world. It’s a classic David and Goliath battle. The states of Britain and America stand shoulder to shoulder against a single journalist whose crime was to expose their criminality. The overpowering bully versus the underdog. Except, the bully will win. How many cases in recent British history have tested state power in the courts as this?

Of all places in the world, in a British court, it should make no difference what anyone thinks about the defendant. But in this case, the method of proof and the rules of evidence are without a doubt compromised – as indeed, is evidence of torture in this case. Even the judge’s actions to date have been more than questionable and seem by all accounts prejudicial.

The common law of England is the oldest national law in Europe and sets the legal basics of many countries around the world – and right now, whilst Assange is on trial so is British justice. Without a doubt, this case is universally important.

Assange sits in court behind a bulletproof screen, more like a box or prison cell designed to protect the court and public from the most violent of people that humanity can spew up. He is unable to hear or see proceedings properly and barred from even sitting or conferring with his lawyers. Even killers and terrorists are allowed (not always cuffed) to sit in open court next to their defence team.

The court has only 16 chairs for members of the public, who themselves were subjected to intense security measures over several hours just to enter the court. The mainstream media are conspicuous by their absence and those that are present are not reporting the conditions or proceedings of the court other than pre-prepared briefings prepared by the prosecution – in this case, the state. From the UK, the BBC, Sky and Channel4 do not feel the story warrants any exposure at all albeit that a story about why we have leap years appears is definitely in the public interest. It’s a pitiful representation of journalism and reminder of state intervention and manipulation.

Evidence that Assange was spied on in client privileged meetings with his lawyers would, in normal circumstances, be grounds for throwing the case out of court immediately – but the state obviously regards extradition of Assange to their masters in America as far more important than justice or indeed, the British judicial system itself.

Evidence to be produced that the CIA had plotted to kidnap, poison and ultimately kill Assange will be ignored. That there is evidence existing of fabrication of facts by the prosecution should again be grounds to throw the case out. In addition, evidence will be produced that US prison conditions and the impossibility of a fair trial in the US will somehow fail to meet the barrier of halting extradition as it would for any other case. The Trump Administration has even openly stated foreign nationals will not receive First Amendment protections in American courts, again, strong reason alone that extradition should be halted.

And yet, deep down, you know that this is a show trial, really just a kangaroo court. Its outcome is merely a case of manoeuvring the facts and coming to a pre-ordained decision ordered by a cowering supplicant state of America. When this case is over, it will set a new precedent for the state against dissidents, it will change the very basis of justice and will decisively and permanently change the course of court cases to follow.

One political commentator from inside the court asserts that – Baraitser (the judge) makes zero pretences of being anything other than in thrall to the Crown, and by extension to the US Government.

And as Roger Waters said outside the courthouse – when talking about British justice and why Assange won’t get the justice he is entitled to is – “Because we don’t live in a free country, we live in a glorified dog kennel and we bark and/or wag our tails at the bidding of our lords and masters across the pond.”