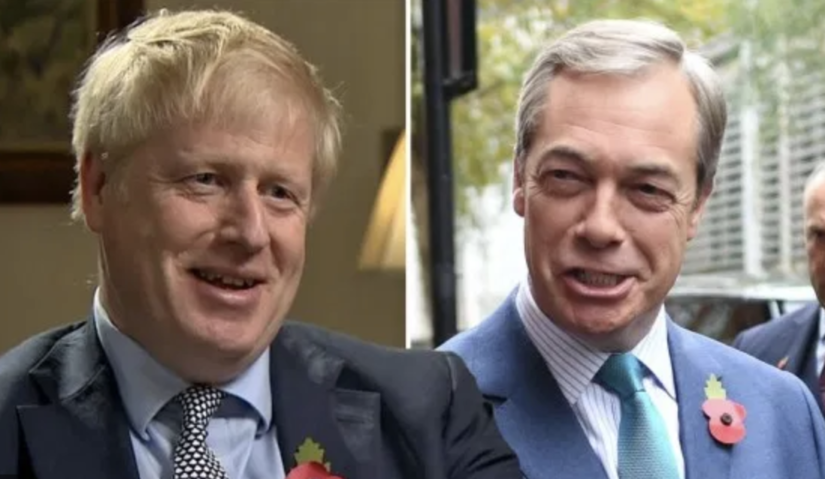 In a bizarre twist in an election period where propaganda and cover-ups characterise the news landscape, Nigel Farage has astonishingly claimed he was offered a state bribe – a peerage no less, just 48 hours before scrapping plans to stand candidates in hundreds of seats amid mounting warnings he risked scuppering EU withdrawal. This was his own claim – until of course, public reaction kicked off – whereby, he attempted then to deny his own claim – apparently.

“#LordFarage” started to trend on Twitter after the Brexit Party leader confirmed that he had been offered an honour by the Tories.

Speaking to the Mirror on Monday, he was asked what had been promised in return for dropping Brexit Party candidates in Conservative-held seats he insisted: “Nothing, and I have asked for nothing. I don’t want anything.”

Pressed further on the matter, he was asked if he had been offered a peerage after previous reports suggested the Tories had tried to use one to broker a deal.

The Brexiteer went on to admit: “I was offered one last Friday.”

The story came out because the Times had, in fact, reported the same story over a week earlier under the headline: Nigel Farage: the Tories have offered to make me a peer twice — I won’t be bought off with baubles.

“Nigel Farage has claimed that he was twice offered a peerage and that a senior colleague was offered a safe Tory seat in a bid to persuade the Brexit Party not to run against the Conservatives in the general election.”

In the meantime though, Farage would rather be with his new best friends Donald Trump and Steve Bannon, presumably because Boris Johnson’s political manoeuvre to reach out to the far-right is simply not far-right enough.

In the same article, the Times claims Nigel Farage would still rather be in America than remaining in Britain under Boris Johnson’s Brexit plans. He said: “If I thought this was Brexit, do you know where I’d be? On the other side of the Atlantic.”

A fan of Scottish Independence decided to make his point on the matter – that sums it up nicely: 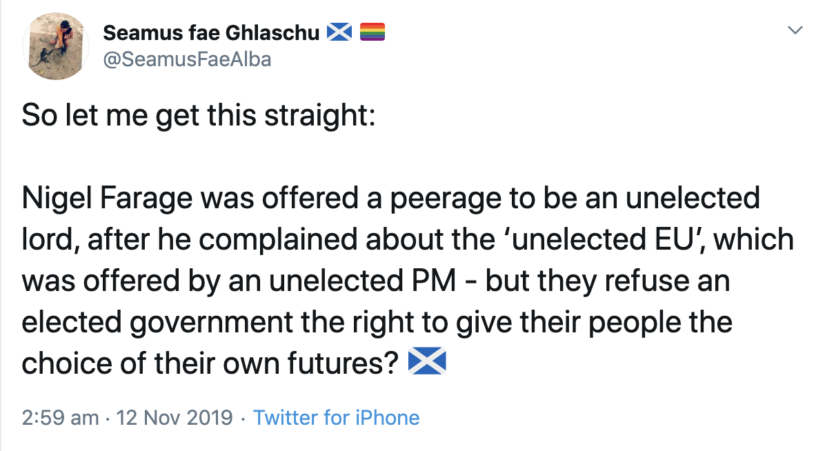 It is astounding is it not – that an unelected prime minister can make a political opponent a peer and another a guaranteed seat in parliament in exchange for political favours. This is beyond reproach. The accusation from the general public is that parliament has become a sewer is well supported with news like this and with bribery and corruption like this a direct cost to the taxpayer – is it any wonder?