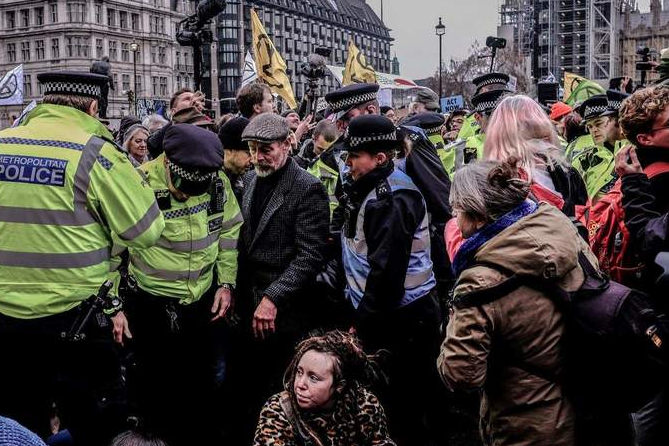 Back in September last year, three environmental activists were the first people to receive jail sentences for an anti-fracking protest in the UK. In fact, they were the first people jailed in Britain for non-violent protest since 1937. This is a new and very worrying action by the state that will continue to increase if the state remains unchecked. Britain is becoming less democratic and more authoritarian with every passing month.

Two of the men were given 16 months in prison and one got 15 months after being convicted of causing a public nuisance by a jury at Preston crown court last August. Another defendant was given a 12-month suspended sentence after pleading guilty to the same offence. Their offence was to camp on top of trucks delivering drilling equipment to stop what local people and the local council wanted to be stopped – but the government pushed ahead anyway.

On appeal, amid public protest, they were released. The high court ruled that the prison terms were “manifestly excessive”. They had served three weeks whilst waiting for the appeal. They were released on conditional discharge, so if they re-offend over the following two years they can be resentenced for their initial conviction.

Then in February this year, fifteen activists were arrested and subsequently convicted for chaining themselves around an immigration removal flight at Stansted airport. Their convictions were alarmingly moved up by the state to that of an act of terrorism. At the court hearing, once again, amid a public outcry and notable human rights activists, they received suspended sentences or community orders. Three were given nine months in jail suspended for 18 months, along with 250 hours of unpaid work. One was sentenced to nine months suspended for 18 months, with 100 hours of unpaid work. The remainder were given 12-month community orders with 100 hours of unpaid work.

In mitigation, Dexter Dias QC said it should be taken into account that all acted to try to help individuals they perceived to be in danger. “The reason they wanted to prevent the flight’s departure is that they believed the welfare and safety of some of the people on that flight was at risk,” he said.

Dias quite rightly pointed out that – “In those circumstances, the court historically in this country have considered that conscientious motivations offer quite significant mitigation.”

Just two days ago, two climate change protestors were found guilty of criminal damage after digging a hole in the lawn outside the Houses of Parliament.

Paul Enock and Stephen McDonald, both 62, pleaded not guilty during a trial at Hendon Magistrates Court, arguing that they had acted out of necessity to draw attention to the problem of climate change. But the judge, sitting at Westminster Magistrates Court on 29 March 2019, disagreed and gave each man a three-month conditional discharge.

Enock and McDonald had both admitted digging a hole in the lawn on Parliament Square on 24 November 2018 as part of Extinction Rebellion’s wider campaign of non-violent and civil disobedience. Enock told the court the aim was “to recruit public sympathy and awareness to shift the debate on climate change” and stressed that an important part of this approach was not to resist arrest and to be respectful to law enforcement officers.

Kavi Choolun, the prosecutor for the Criminal Prosecution Service, said the act had caused damage worth £664.

During the trial, the two men argued they had acted out of necessity because they believed climate change was such an urgent problem, and that their actions were reasonable under the circumstances.

Enock and McDonald were asked whether they had tried other ways of persuading the government to act. Both said they had campaigned on climate change for decades, but felt they had run out of other options.

The same response came from the fracking protestors. They had protested non-stop for the protection of their community with local people, supported by the local council but the government did not listen and awarded licences to frack.

McDonald told the court he was acting to protect his three grandchildren, aged 4, 7 and 8. “There’s almost nothing I wouldn’t do to protect the future of my grandchildren,” he said. “I know if we carry on this path their future life will severely curtailed.”

Using democratic means for a cause for the greater good is all about organising petitions and then resorting to non-violent protest if no-one in power listens to reason. It is indeed the way of democracy. As soon as the government weighs in and starts throwing people in prison, or even threatening it, democracy comes to an end.