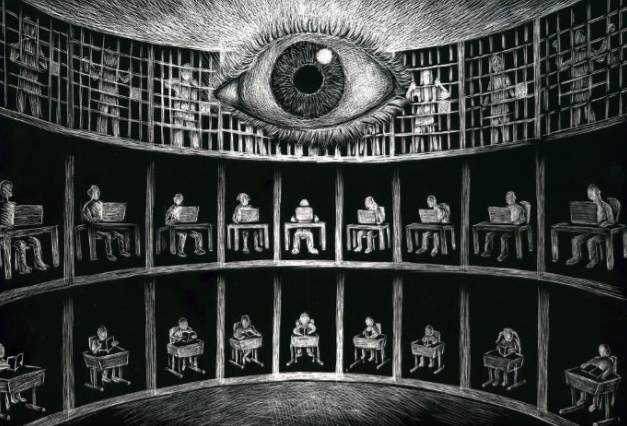 By Truepublica – First published September 2015. This article is now three years old. In that time, Britain has dramatically moved forward with its intentions to become the Western world’s foremost surveillance state. And whilst all attention is on Brexit – a recent disclosure in Australia revealed that Britain is to press ahead with forcing all technology companies to provide backdoor access to encryption systems to the state.

Everything that was proposed by the government in this article has become law. By 2020, Britain will be a classed as a ‘techno Stasi-state’ because the general public turned a blind eye and effectively waved through the legitimisation of authoritarian decrees.

One should not forget that openness and participation are antidotes to surveillance and control.

When David Cameron won the 2015 election one of the first things he said was; “For too long, we have been a passively tolerant society, saying to our citizens: as long as you obey the law, we will leave you alone“. This ominous statement immediately threw a dark shroud over Britain’s civil liberties laws, its openness and public participation.

Few of the mainstream establishment press thought this was worthy of mention. From ZeroHedge – It’s not just those domestic extremists and crazy “conspiracy theory” kooks who took serious issue with UK Prime Minister David Cameron’s overtly fascist language when it comes to freedom of expression in Great Britain”. The Independent was more sanguine – “This is the creepiest thing David Cameron has ever said“.

New powers being brought in by the Conservatives should be of great concern to everyone.  Theresa May, the most authoritarian Home Secretary in Britain aside of world wars is by far one of the most dangerous politicians walking in the corridors of power.  These new powers are expected to be the introduction of banning orders for organisations who use hate speech in public places, but whose activities fall short of proscription and include;

Simply take out the word ‘extremist’ from those five points and you have the existence of something completely different. Of course you could be forgiven for thinking that the government would not abuse such laws. But they already allow for such abuses to take place on current terror laws, for instance:

What is most striking about these events are that publicly funded bodies such as the BBC, the Police and local authorities are refusing to answer perfectly reasonable Freedom of Information Act requests. They are exercising powers they shouldn’t have but were given by a government, that a law abiding electorate were not consulted on and do not approve of in the first place.

There is proof that local authorities have even used terror laws to surveillance dog fouling, underage sunbed users and people breaking smoking bans.

Now that the Conservative government in Britain has it’s feet under the desk it is preparing to enact new legislation that, under the guise of the “war on terror,” that will vastly expand police-state powers and essentially criminalise speech and other political activity.

Presented officially as an anti-terrorism bill, the proposed measures will be targeted at any popular opposition to the government’s policies of aggressive militarism abroad and austerity measures in Britain, or for that matter anything the government deems worthy of oppressing.

The new bill will include a series of measures targeting groups and individuals deemed by the government to be “extremist.” This term is defined so vaguely as to encompass a wide array of political activity (such as local anti-fracking groups).

The new bill will create extremist “disruption orders” for individuals and “banning orders” for groups. The targets for these new police powers will be those who have conducted “harmful” behaviour.

The “harmful” behaviour covers activities that pose “a risk of public disorder, a risk of harassment, even alarm or just distress or creating a ‘threat to the functioning of democracy’.”

This will be used to criminalise campaigns critical of government policy and protests, which are frequently dispersed by the police on precisely the grounds that they disrupt public order. The language also indicates that the government would have the authority to target those merely planning such activity prior to it taking place – and they would do that through mass surveillance.

UK intelligence agency GCHQ has already been caught acting unlawfully by spying on two international human rights organisations. In addition, last year it was revealed that GCHQ were illegally eavesdropping on sacrosanct lawyer-client conversations in order to both disrupt and make gains on negotiations. GCHQ failed to follow its own secret procedures. “If spying on human rights NGOs isn’t off-limits for GCHQ, then what is?” said Privacy International.

From here we can see we now have a vast illegal state surveillance system that the East German Stasi would have had wet dreams about. The government is slowly closing down Britain’s very open society and they intend on doing so using one of Britain’s finest philosophers and a well tried and tested theory.

The Panopticon is a type of institutional building designed by the English philosopher and social theorist Jeremy Bentham in the late 18th century. The concept of the design is to allow a single watchman to observe (-opticon) all (pan-) inmates of an institution without the inmates being able to tell whether or not they are being watched. Although it is physically impossible for the single watchman to observe all cells at once, the fact that the inmates cannot know when they are being watched means that all inmates must act as though they are watched at all times, effectively controlling their own behaviour constantly.

Today, the internet has become the architecture of the state managed panopticon.

Speaking to the Guardian weeks after his appointment as the UN special rapporteur on privacy, Joseph Cannataci described British surveillance oversight as being “a joke”, and said the situation is worse than anything George Orwell could have foreseen.

Terror laws we have are already being abused. One is reminded of 82 year old Mr Wolfgang‘s pass being seized and he then detained under the Terrorism Act for interrupting Tony Blair’s speech at the Labour party conference in 2005.

Some of the most egregious cases of misuse include: a council in Dorset putting three children and their parents under extreme surveillance to check they were in the catchment area for the school they had applied to.

A report by the House of Lords Constitution Committee, Surveillance: Citizens and the State, had warned in 2009 that increasing use of surveillance by the government and private companies was a serious threat to freedoms and constitutional rights, stating, “The expansion in the use of surveillance represents one of the most significant changes in the life of the nation since the end of the Second World War. The government’s of 2010 and 2015 have taken no notice at all.”

‘Tempora‘ was one such government mass surveillance and spying programme among many. It is alleged that GCHQ produces larger amounts of metadata than America’s NSA. By May 2012 300 GCHQ analysts and 250 NSA analysts had been assigned to sort data.

The amount and type of data collected and stored is mind-boggling. Every email, phone call, location data, relationships, family and friends, affairs, work, income, expenditure, social habits, it simply has no end. You would not write down the passwords to your email account, bank or Amazon account, social media platforms and give a stranger the list. But that is exactly what GCHQ and other organisations have acquired.

‘Optic Nerve‘, another UK state surveillance mission, intercepted and stored the webcam images of millions of internet users not suspected of wrongdoing. They have stored naked pictures of you, your children and pictures you have sent to family and friends in a whole new level of violation of our users’ privacy. This was a biometric exercise of epic proportions. The programme collected 2 million citizen images in just a few months. We have no idea how far this programme went.

On May 13th 2013, Edward Snowden made a dash via Hong Kong to Moscow. That June, the spying and surveillance revelations came forth. And what came forth was the stunning realisation that our government has been lying to us about the sheer scale of state surveillance conducted on a truly industrial scale.

Not happy with all this illegal state activity over its citizens, new orders that the government are now seeking contain bans on individuals broadcasting their views on television, and anyone subject to an order will be compelled to submit any written publication, including social media posts, to the police before it is printed. In addition, the orders will make it illegal for individuals to attend or address public gatherings or protests.

Banning orders will allow the government to outlaw any organisations it feels is not in their interests. If such a move is taken, anyone found to be a member of such an organisation will be guilty of a criminal offence. Authorities will also be able to shut down premises used by groups.

Human rights group Privacy International branded the new proposal as an “assault on the rights of ordinary British citizens.”

As the Guardian ’s home affairs editor wrote in an analysis of the proposal, “the official definition of non-violent extremism is already wide-ranging” and, as Big Brother Watch has pointed out, the national extremism database already includes the names of people who have done little more than organise meetings on environmental issues.”

Last year the government even attempted to hold an entire terrorism trial in secret before abandoning it at the last minute.

Together with a sweeping attack on democratic rights and legal norms, the Conservatives’ anti-terror bills will further advance the government’s right-wing agenda. Cameron’s proposals, aided by Home Secretary Theresa May, make clear that the Conservatives are determined to vastly expand the repressive powers of the state.

In little more than five years the state has gone from an open society of democratic principle to one that resembles an authoritarian state. We are living in an electronic concentration camp. Everything you do in life is now recorded and there is no place to escape. Soon, it will be impossible to have a dinner party with friends without the state knowing about it and wanting to know the purpose of your gathering. Quite the opposite of Cameron’s ‘big society’ project, that is destined to fail in the years ahead.

The conduct of the British government and its intelligence services are acting under a pernicious veil of secrecy to the detriment of all citizens.