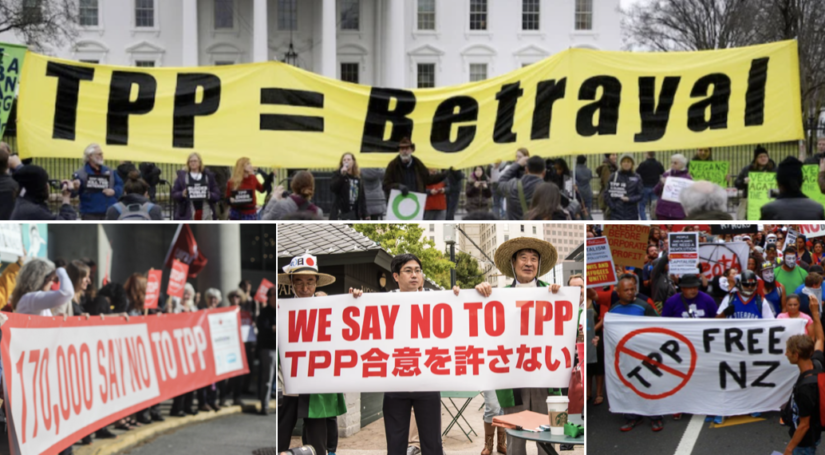 TruePublica Editor – Originally published June 19th 2020: I have always maintained from the soon after the EU referendum that Brexit was a con. The team here at TruePublica have relentlessly warned that far from taking back control, Brexit was a trojan horse for big business. It was designed to gain more control and dominate more of our lives and how we live it. Half of our modest lobbying budget went to this cause. If ever this strident belief against the denials of free-market fundamentalists you only have to read the e-book Brexit – A Corporate Coup D’Etat (£2.99 instant download to any device). It spells out how this Trojan Horse was delivered and every prediction in it has sadly now come true, with one last one remaining.

Liz Truss announced last Tuesday 16th June that Britain will seek to accede to the ‘Comprehensive and Progressive Agreement for Trans-Pacific Partnership‘. This announcement has gone under the radar with the mainstream media who seem to have completely missed its significance. The reality behind the trade deal called TPP was that it was a deal that hugely benefitted and extended corporate rights whilst suppressing the rights of citizens and significantly undermined both public health and future governance of citizens rights. This agreement represents little more than literally – a corporate coup d’etat.

The EU’s version of the much-despised Trans-Pacific Partnership trade agreement was called Transatlantic Trade and Investment Partnership or TTIP. Back in 2016, TruePublica stated that TTIP was not dead or buried as world leaders had stated and the media has so widely published – it was simply parked for a future crisis to give it cover to facilitate its reawakening. That crisis was a planned-for hard Brexit.

Back in 2015, the largest-ever consultation study in the EU Commission’s history across all 28 member states resulted in an overwhelming 97% negative response rate to TTIP being implemented in the bloc. Britain provided the second-highest level of objection and added the most signatures to the EU biggest ever petition of 3.2 million names. Japan, America, Germany, France, Britain and many other countries saw mass street protests and many petitioned against both versions of TPP and TTIP.

When preparing for TTIP negotiations in Europe, 560 meetings took place between 2012 and 2013. Just 4% were represented by public interest and civil society. Unashamedly, the EU Commission allowed 92% of all TTIP meetings to be dominated by lobbyists and corporate trade associations, all behind closed doors. Over 30,000 grey-suited lobbyists were renting property outside the halls of the Commission HQ in the de facto capital of the EU as hundreds of millions of dollars were invested in getting a deal done.

Both WikiLeaks and Greenpeace confirmed that TPP and TTIP amounted to nothing more than “a huge transfer of power from people to big business.”

Back then, Wikileaks had offered a bounty of 100,000 euros for the full text of the TTIP agreement and Greenpeace Netherlands obliged. The leaked 248 secret pages of the controversial trade deal between the U.S. and EU, exposed how environmental regulations, climate protections and consumer rights were effectively being “bartered away behind closed doors.” Both WikiLeaks and Greenpeace confirmed that TPP and TTIP amounted to nothing more than “a huge transfer of power from people to big business.”

Tensions amongst civil society rose to fever pitch with the devastating news. If ever Britain was fired up to reject the EU on the grounds of ‘taking back control’ – this was it. Then, in 2016, Trump and Merkel announced TTIP was dead in the water. The same with TPP.

I personally spoke to Corporate Europe Observatory (CEO) and with former World Bank staff and the message I got was that TPP and TTIP had merely been parked – awaiting another opportunity and a rebrand. This week, TTP has become part of the lexicon of Brexit. The Comprehensive and Progressive Agreement for Trans-Pacific Partnership as it is now named was rebranded in 2018 with the words ‘comprehensive’ and ‘progressive’ meaning nothing more than ‘big fraud’ and ‘more of it’ – and now we’re going to get it.

The British government has now confirmed its intention to hand unprecedented levels of power to transatlantic corporations. Boris Johnson and his free-market extremists will sell the rights of British citizens down the river to further their own personal agenda. By the time the public can see through the fog of a public health crisis and following the economic crisis of a pandemic, it will all be too late.

Commenting on the Liz Truss’s announcement that Britain will seek to accede to the Comprehensive and Progressive Agreement for Trans-Pacific Partnership (known as TPP for short), Nick Dearden, director of Global Justice Now said:

“The Transpacific Partnership is an awful deal which fuelled massive protests in Chile and became so toxic that the US withdrew from it. Like its sister deal TTIP, it is a threat to our public services like the NHS, our food standards and our privacy online. The government can’t kid us that this isn’t a corporate powergrab because unlike the deal they’re negotiating with Trump, the TPP exists already, and we can read the provisions for ourselves.

“We know that there is a corporate court system which can be used to bully governments out of taking public health or environmental action that big business doesn’t like. We know that the ‘right to regulate’ provisions are not worth the paper they are written on. We know it contains one of the most extensive sets of privileges for Big Tech corporations which threaten to undermine our rights online.

“What will also strike many people as absurd is that the government seems to think an economic deal with countries thousands of miles away can make up for their failure to negotiate a deal with our biggest trading partners only 20 miles away. Nothing could better demonstrate the ideological crusade which this government has embarked on to strip away our protections, rights, and standards.”

Australia, Brunei, Canada, Chile, Japan, Malaysia, Mexico, New Zealand, Peru, Singapore, Vietnam are members of the rebranded TPP. The United States signed on 4 February 2016 but Trump backed out because it simply wasn’t extreme enough for him. Trump is bullying TPP members states to bow to his demands so America can join.

Last October, TruePublca published a leaked government paper warning of the dangers of a US/UK trade deal as TTIP in the EU re-emerges behind closed doors. We also published a little known statement (HERE pdf) from a cross-Whitehall economic study that confirmed -“that a US free trade agreement would increase UK GDP by only 0.2 per cent after 15 years, a tiny fraction of the expected loss of trade from the EU and additional costs of Brexit during that time.”

That same week that we warned any deal struck with the US or through trade deals like TPP would scupper any potential trade deal with the EU. Two days later, the FT published an article that highlighted this warning where Ministers have been bluntly told that the UK’s efforts to strike a US trade deal after Brexit could “severely limit” Britain’s ability to negotiate an equivalent agreement with the EU.

In another paper, we published – The leaked document also suggests that the Department for International Trade will press Defra to accede to the Trump administration’s demands. Last month – exactly that happened. To British agriculture – it was a devastating blow.

In 2016, TruePublica ended an article with the words – “In the end, does it matter if it’s called TPP, TTIP, CETA, TISA and the like, they are all shadowy unaccountable acronyms designed to enrich the few via extreme neoliberal capitalism under the guise of free trade.”

“Why are apparently intelligent people are driven to destroy the UK economy? This has confounded me since the run-up to the referendum. Now all is explained. Terrifying and compulsive reading.”

“Forget the rubbish about taking power back or sovereignty. It is about the drive to deregulate and reduce rights. The EU has many faults but it also offers safeguards that some on the corporate free-market right want rid of. Those who will suffer the most – the poorest. This book offers an excellent insight into what Brexit is really all about.”

“This book gives access to the evidence of the biggest corruption scandal involving neo-liberal finance since thatcher. There are detailed references to all the data they use. Excellent.”

“Reading this has opened my eyes to something the mainstream narrative didn’t quite make clear. A must-read. Very enlightening and quite alarming to say the least.”

“Compelling book with well-supported thesis that Brexit was forged with money and behavioural manipulation rather than a true democratic expression.”