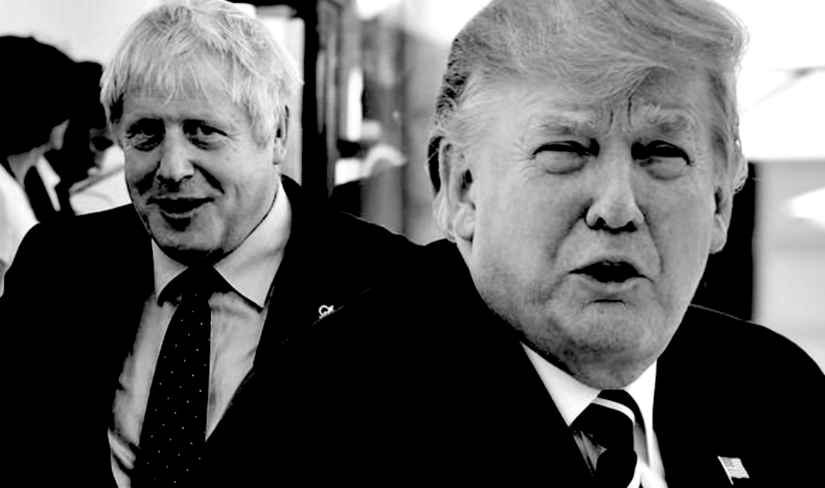 By TruePublica: The 31st October looms large. Boris Johnson’s career may be ‘dead in a ditch’ or maybe the ‘do-or-die’ strategy produces a deal or possibly something else. One thing is for sure, Britain does not need a specific trade deal with America, other than the one it already has. The proof of that statement comes from a largely unreported but an extensive 2018 cross-Whitehall study of the costs and benefits of Brexit. It estimated, in its own words – “that a US free trade agreement would increase UK GDP by only 0.2 per cent after 15 years“, a tiny fraction of the expected loss of trade from the EU and additional costs of Brexit during that time.

The warnings given to government about Brexit have come thick and fast, especially in the last 12 months where time has allowed more in-depth analysis of the likely effects of Brexit – deal or no-deal. These warnings have come from the most respected organisations and institutions in Britain such as the – Confederation of British Industry, Department for International Trade, Bank of England, The Office for Budget responsibility, and Centre of Economic Performance. Then there have been industry sectors such as financial services, motor, agricultural and even the UK Warehousing Association that have issued warnings of the scale of problems that various forms of Brexit brings.

Two days ago, another warning was issued. This time according to a leaked government document written by civil servants at the Department for Environment, Food and Rural Affairs. The FT has published an article that highlights this warning where Ministers have been bluntly told that the UK’s efforts to strike a US trade deal after Brexit could “severely limit” Britain’s ability to negotiate an equivalent agreement with the EU.

“The document written by civil servants at the Department for Environment, Food and Rural Affairs suggests the US is likely to press the UK to relax measures to protect humans, animals and plants from disease, pests and contaminants ahead of finalising a trade deal. Donald Trump’s administration is pushing for access to the British market for US chlorine-washed chicken and hormone-fed beef, which both fall short of the EU’s so-called sanitary and phytosanitary standards (SPS). The UK is expected to come under pressure from the US to allow more imports by American agrifoods companies by relaxing rules governing animal welfare and pesticide residue levels, among other things. The leaked document, which was prepared for environment secretary Theresa Villiers last month, outlines the potential consequences of the UK acceding to Mr Trump’s demands for a less stringent approach to SPS standards as Britain seeks free-trade agreements with countries across the world.”

“Any significant movement could have implications for our other [free-trade agreements] or export arrangements, which are based on existing standards,” says the document. “In particular, agreeing to the US asks could severely limit our ability to negotiate an agreement with the EU . . . EU concerns about the risk of non-compliant goods entering its territory would, for instance, be heightened if the UK acceded to US demands on chlorine-washed chicken.” The Defra document also acknowledges that relaxing SPS standards in the UK in order to get a US trade deal could damage public health. “Weakening our SPS regime to accommodate one trade partner could irreparably damage our ability to maintain UK animal, plant and public health, and reduce trust in our exports,” it says.

In certain circumstances it could even lead to the EU imposing a hard border on the island of Ireland to protect the bloc’s single market, adds the paper.

The leaked document also suggests that the Department for International Trade will press Defra to accede to the Trump administration’s demands.

“Defra will come under significant pressure from DIT to accommodate the US’s asks,” it says. “DIT are concerned about the ability for controversial SPS issues to hold up [free-trade agreement] negotiations [with the US].” Brussels has a more conservative approach to environmental and food policy than the US, including on SPS. Liz Truss, trade secretary, said at a fringe event at the Conservative party conference that while she was “proud” of Britain’s high environmental standards she wanted to take “a much more free-market approach”.

In the meantime, the USA is pressing the EU even harder for it to reduce its standards by ramping up the beginnings of its trade war – a trade war that the EU could do without as its economy is stalling, especially with the threat of Brexit and a global economic slow-down becoming more certain.

And like Britain’s warning, the EU has its own report (published in late August) which cautioned of the serious risks of a trade agreement for public health, consumer rights and the environment by doing a deal with the USA.

In “Trading Away Protection” lobby watchdog Corporate Europe Observatory laid out the attempts of US negotiators to launch a renewed attack on EU precautionary measures for the safety of chemicals, food and GMOs, while also explaining that EU negotiators are pushing for US acceptance of EU product approval rules, so-called conformity assessment, which has proved highly flawed in sensitive areas such as medical devices.

The trouble is – it looks like the EU will buckle first under the pressure of fighting on multiple economic fronts. The result is that the spectre of an emerging TTIP style deal has just raised its ugly head once again. These meetings are being held in secret given that public reaction to the last TTIP deal caused waves of protest across the 28 nation trading bloc and America before it was dropped two years ago.

Corporate Europe Observatory trade researcher Kenneth Haar said: “The worst thing that could happen would be both sides getting their way. EU safety standards for chemicals, GMOs, pesticides, and foods would take a massive hit and the US would see some of its product approval systems undermined by a more lax European approach.

“The result could be consumers in the EU being forced to eat non-labelled gene-manipulated foods that have been treated with toxic pesticides, while patients in the US could wind up with unsafe implants. This must not be allowed to happen.

“It is provoking to see EU negotiators once again keeping their moves in the dark. There is even less transparency around the current negotiations than there was around TTIP. While the Commission is consulting in-depth with European corporations, the public is not kept informed in any meaningful way.”