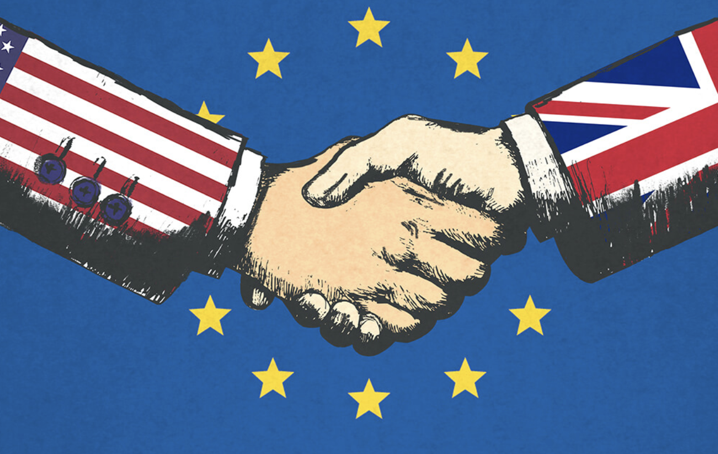 The information tribunal has ruled that the government failed to disclose important information to campaigners about its post- Brexit trade talks with other countries, including the USA, and has ordered the Department for International Trade to provide campaigners with more details about its trade negotiations.

In its ruling, the tribunal painted a critical picture of the Department for International Trade’s level of transparency, noting a government representative had shown a “clear inability to provide answers on many points of detail” and that the department had failed to deal with aspects of the case in a “detailed and rigorous way”.

The case, brought by Brendan Montague on behalf of Global Justice Now, challenged the government’s refusal to release details of trade talks with a range of countries including the USA. While initially refusing to disclose almost any information, on appeal the government released hundreds of blacked-out papers, which were brought to public attention when Jeremy Corbyn held them up during the 2019 general election campaign. Campaigners brought the case to release the redacted information with legal firm Leigh Day and Sam Fowles of Cornerstone Barristers.

The Tribunal ruled the government must provide campaigners with:

Significant weight was placed on the testimony of a former trade official, who described the government’s approach to transparency as “at the far end of the secrecy spectrum.”

However, the tribunal did not order the release of all information requested by campaigners, due to exemptions such as the impact disclosure might have on international relations, saying that “the public interest in maintaining the exemptions narrowly outweighed the public interest.”

“We’ve been vindicated in challenging the government’s extreme approach to secrecy when it comes to trade negotiations.

Although we haven’t got all the information we wanted, we feel the government’s hostile approach to freedom of information law has been exposed for what it is.

The tribunal agreed with us as to the need for proper and detailed public debate and public information around trade deals – after all, these deals will affect all of us, often in profound ways.

Our request for further information was ‘narrowly’ rejected, but we hope that now the negotiations with many countries have been placed on a more formal basis, the government will recognise the urgent need to open up its trade policy to public debate.”

“Where so many fundamental issues such as environmental protections and food standards are at stake in post-Brexit trade deals, it is crucial that the public is kept informed, to the greatest extent possible, about what their government has put on the negotiating table and with whom it is negotiating.

“While it is disappointing that our clients did not obtain the right to disclosure of everything we argued for, we are hopeful this is a positive step towards greater transparency in future trade deals.”

“The constitutional implications of this decision are significant. The Tribunal found, as a matter of fact, that international trade deals can drive primary legislation. It also endorsed the House of Lords Constitution Committee’s findings about the significant constitutional impact of trade agreements. That point has relevance well beyond this one case.”