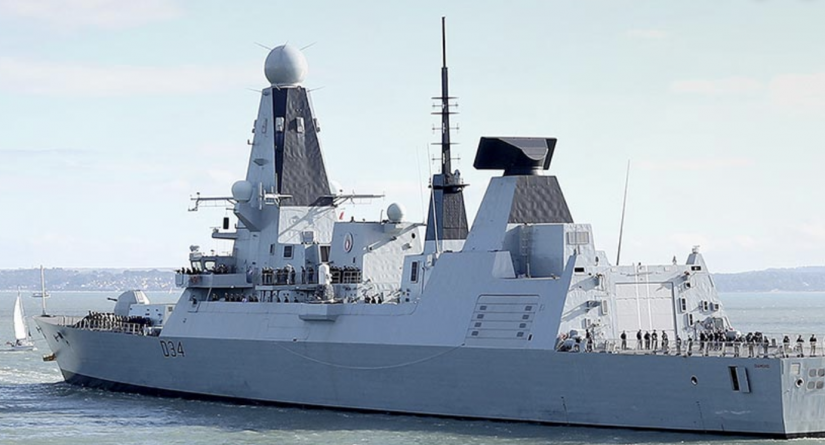 TruePublica Editor: With the impending disaster that the now expected no-deal Brexit is likely to bring after the publication of ‘Operation Yellowhammer’ and TruePublica’s republishing of the ‘Doomsday Plan’, the very last thing Britain needs is a war. Worse, it does need a war 4,000 miles from its own shores leaving the country devoid of any naval capability. This is a distraction tactic the Johnson government so desperately needs with just 72 days to go before a political, economic and constitutional crisis explodes.

By Paul Rogers: The stand-off between Iran and the US has receded from the headlines, but a lot is happening behind the scenes, and a lot of it involves the UK. Most obviously, more and more British warships have sailed to the region, part of a long-term effort by the Conservative government to re-establish the country as a global maritime power.

This includes building up the permanent naval force operating out of HMS Juffair, the base in Bahrain. Until April this was primarily the shore facility for four minehunters and their support auxiliary but there is now an escort – frigate or destroyer – to be based there. The current ship is HMS Montrose, a Type-23 anti-submarine frigate. What is really significant is that Montrose has recently been joined by a much larger, more sophisticated warship: HMS Duncan, a Type-45 air-defence destroyer.

Another Type-23 frigate, HMS Kent, has just left Portsmouth for the Gulf and is due there next month. This means that at least for the next few months the Royal Navy will have three warships in the Gulf. Intriguingly another Type-45 destroyer, HMS Defender, also left Portsmouth this week. Its stated mission is a series of patrols in the Asia-Pacific region, but that can cover a very wide area, including the Indian Ocean, making it possible to divert there as back-up if the need should arise.

While the Royal Navy has thirteen frigates, with up to nine normally available, it has only six destroyers. Worse, these very expensive ships – they cost about a billion pounds each – have had a troubled history since they entered service between 2009 and 2013. The propulsion system has caused the most difficulties, including a problem with operating in warm waters – something of an issue if they are deployed to the Gulf.

The effect of this is two of the destroyers are undergoing long-term repairs. HMS Daring has been laid up awaiting a major refit since 2016; HMS Dauntless was also laid up in 2016 and is now in the middle of a similar refit, which will take until 2021. The other two ships of the class, Diamond and Dragon, are both in service but HMS Diamond’s last six-month deployment in 2017 had to be cut short after two months because of unspecified mechanical problems.

The rule of thumb with naval deployments is that if you want to keep one ship on station at a distance you need at least two others in addition to allow for maintenance and sailing to and from port. This means that two destroyers on patrol in the Gulf would mean none would be available for anything else.

This means that two destroyers on patrol in the Gulf would mean none would be available for anything else.

That might not seem relevant – there are plenty of frigates available – until you consider the Iranian tactics. The Iranian Revolutionary Guard Corps has specialised in fielding large numbers of small, fast patrol craft and even speedboats, and also has drones. It has long practised ‘swarm’ tactics – using a score or more boats to harass opposing ships. They may not even intend offensive action, but just to keep a warship tied down as it tries to work out what is going on. It is all part of Iran’s wider move towards irregular war.

For a warship on the receiving end of this kind of tactic, all the weapons in the world are of little use if the radar and fire control systems on them cannot cope with simultaneously tracking large numbers of small boats, as well as drones and even mini submarines. For that specific task, the Type-45 destroyer with its computing power probably has as much capability as any ship in any navy worldwide.

In short, the UK may have to depend heavily on its most modern warships, but this is at a time when the second factor kicks in – the increasingly close relationship with the US Navy.

Until a few days ago the UK was still trying to put together a European naval force to accompany tankers through the Strait of Hormuz, but the rest of its European allies would not play ball, not least because two key states, Germany and France, still see Trump’s rubbishing of the nuclear deal with Iran as the root of the current crisis. The UK under Boris Johnson is far more sympathetic to Donald Trump’s way of doing things and has now gone back to the other idea, which is joining in with the US and its Operation Sentinel patrolling the Strait of Hormuz.

For the White House this is very useful: the Trump administration is keen to have an international coalition opposing Iran but it has proved singularly difficult to get together. According to Jane’s Defence WeeklyWashington and London have even been pressuring the Australian government to join in, but so far to no avail.

What is clear is that the Johnson government really has now thrown its hand in with Trump, with Jane’s even reporting that the UK is offering to lead one of Sentinel’s maritime task groups. In 2003 it was Bush and Blair leading the way to war with Iraq. It now looks increasingly likely that if the crisis really does escalate towards a conflict with Iran then it will be another dynamic duo, Trump and Johnson, at the helm.