Brook House Detention Centre – a “dystopian stain on our democracy” 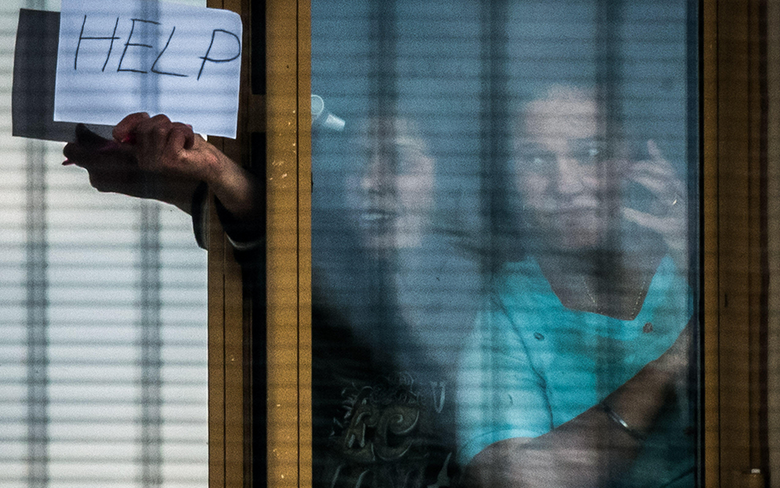 By Liberty: “I hate being in Brook House”, he told us, “I am frightened and anxious all the time”. Mehdi*, an asylum-seeker from Bangladesh, does not understand why he was held in detention in the first place. “I am being punished but I have done nothing wrong. I am not dangerous and I am always respectful to others.”

Mehdi’s only crime was to seek refuge in the UK after he was beaten and his life was threatened for membership of the opposition party. He was locked up in Brook House, the detention centre near Gatwick Airport run by the multinational security firm G4S on behalf of the Home Office.

No seat, no lid, no screen

Mehdi described his cell to us:

“For a while, there were three of us in the cell, but now I share with just one other. The cell has a toilet, which has no seat, no lid and no screen. Having no screen means I can see my room mates on the toilet, and they can see me. To be seen on the toilet is humiliating and degrading. I try to hold on but it’s excruciating. I eat less food during the day so that I won’t need the toilet at night.

The cell has one window, but it doesn’t open and the door is locked, so the room smells so bad. It makes me feel sick that I sleep next to a toilet. I am living inside the toilet. I cannot pray in my room because it’s not clean – you can’t properly follow Islam with a toilet in the room. I can’t breathe. It’s like hell in here.”

Mehdi was locked in this putrid cell for over 13 hours a day.

These barbaric conditions make a mockery of the Home Office’s stated intention to create a ‘relaxed environment’ for detainees.

Since 2010, Her Majesty’s Chief Inspector of Prisons has repeatedly criticised the “inappropriate” lock-in regime and “prison-like” environment at Brook House. The Home Office consistently ignores these criticisms, claiming they are bound by their operational contract with G4S, and that changes to ensure full privacy of toilets would not be cost-effective.

They also claim, revealingly, that the building design of Brook House (to the specifications of a Category B prison) prohibits structural changes to toilets or ventilation.

Last November, Mehdi and four other detainees at Brook House launched a challenge by judicial review. They argued, with representation from Duncan Lewis Solicitors, that they were being subjected to discrimination in breach of the Equality Act 2010, and that the conditions in Brook House violate fundamental human rights under the European Convention on Human Rights, including rights:

Reactionary as ever, the Home Office released all the claimants from detention.

Liberty has intervened on behalf of Mehdi and another claimant, addressing the court with a specific focus on the right to dignity.

They argue that detention should be a measure of last resort, and that it should take place in appropriate, sanitary and non-punitive conditions.

Failure to provide adequate conditions can result in a breach of human rights which cannot be justified by inadequate resources.

A dystopian stain on our democracy

This challenge comes amid heightened criticism of the UK’s indefinite immigration detention system from across the political spectrum.

Since the All-Party Parliamentary Groups on Migration and Refugees jointly called for a detention time limit of 28 days in 2015, the Liberal Democrats and Labour have now both pledged to end indefinite detention, and the former International Development Minister and Conservative MP Andrew Mitchell recently described the system as a “dystopian stain on our democracy”. Shockingly, the UK is the only country in the EU not to place a time limit on detention.

But this challenge serves as a reminder that not only is indefinite detention abhorrent, but the conditions in detention put the nation to shame. Forget 28 days. One day defecating in front of strangers is one too many.

*Mehdi is not Liberty’s client’s real name. He wanted to share his story but to remain anonymous.