Children abandoned, failure of state and the big con 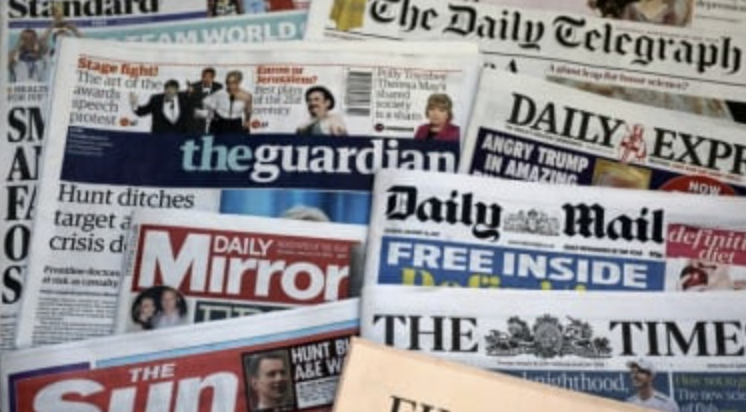 By TruePublica: You would think that news connected to national security, the abandonment of children in a pandemic and dramatic negative changes to the political, economic and constitutional affairs of the country would be humming around every breakfast table in the land.

Not so, according to the national newspapers. The Daily Express is celebrating the worst trade deal ever struck in a major democratic country. The Daily Mail and Telegraph follows with its cheerleading for Brexit and our ‘new chapter for Britain’ without being truthful about what that new chapter really is. All the other papers go with the increasingly alarming Covid disaster – albeit the FT has a spirit-raising story about how the bankers are set to make a fortune as the economic crisis unfolds.

Not on any of the front pages is the story about how Gavin Williamson lost his appeal against a decision in late November of having broken the law by effectively abandoning the rights of children in care. Williamson introduced temporary amendments to statutory safeguards to children’s social care services in response to the impact of the Covid-19 pandemic, which in reality allowed local authorities to ignore thousands of vulnerable children. The judge observed, “the potential impact of allowing a child to be placed with a stranger who was not a family member hardly needed stating, particularly where there might be no nominated officer oversight.” Also, as the judge noted – “there was the importance of regular visits to children in care within a fixed time scale, particularly in the context of placements out of area and given the very large number of children at present placed in unregulated settings.”

How many children placed in “unregulated settings” with “strangers” with no oversight is unknown of course. Given the scale of paedophile scandals in recent years, most sane people would have thought to add further security to vulnerable children when a pandemic brings little more than cracks in systems designed to protect them in the first place.

Failure of state in an emergency

Another story not covered by the mainstream media at all is a parliamentary report that has been published by the Joint Committee on the National Security Strategy and is called ‘Biosecurity and National Security’. The committee concentrated its focus on the government’s preparedness for a pandemic.

Just as TruePublica reported months ago, its report came to the conclusion that the – ‘Government failed to act on its security plans for a pandemic’.

The report notes a “striking absence of leadership” of the UK’s biological security as a whole, with “neither the National Security Council (NSC) nor the Cabinet Office assuming primary responsibility.”

At this point, many people will be scratching their heads and asking what is the point of government at all if it abandons its most basic function by not bothering to consider its own citizens – and looks the other way in the face of a crisis.

The verdict on the government’s handling of the pandemic, which they highlight was “the worst direct security threat to British people since the height of the Cold War”- also went on to say that the result of such wide-ranging incompetence is that the UK will be very lucky to get away with fewer than 100,000 deaths and hundreds of thousands suffering from long-term health damage.

When considering the Conservatives failed austerity policies that led to the deaths of at least 120,000 people, it’s not hard to understand why they didn’t bother with this national security threat either.

openDemocracy published this story and notes that – “The second reason the report is remarkable is where it came from. This was not some lefty think tank but a joint committee of the Houses of Lords and Commons and about as impeccably establishment and mainstream as you could imagine. Its chair is Margaret Beckett, one of the very few competent foreign ministers of the last few decades, who at least ‘got’ climate change. Members include the former director of MI5, Baroness Pauline Neville-Jones; the former Tory defence minister, Lord Tom King; leading right-wing Tory backbenchers such as Edward Leigh; two former soldiers – Bob Stewart MP and Tom Tugendhat MP; and Margaret Thatcher’s key foreign affairs advisor, Lord Charles Powell.”

Of course, this report was published after the end of the parliamentary session and very close to Christmas, which helped to suppress it. The mainstream media on the right just ignored it and the others simply considered the implications of publishing it given the new era of libel threats, intimidation and so on, which is now considered the new norm for any news outlet.

The report doesn’t approach other minor irritations such the billions handed out to MP’s mates and donors of the government, escalating corruption and that the pandemic was regarded more as a privatisation opportunity than the handling of the greatest threat this side of a civilisation-ending nuclear war with Russia.

Will this story go anywhere in future – maybe, maybe not. A pandemic inquiry will no doubt be a whitewash for a government not destined to be threatened with an election until 2025.

The greatest con in British history

After 10 months of tense negotiations with the EU on a post-Brexit trade agreement, ratifying the future relationship deal in the U.K. parliament will be all plain sailing for Boris Johnson. Why? Because not one MP outside of the cabinet has its implications spelt out by the legal profession. This is because by lunchtime yesterday, the 1,000 page document was still under wraps, even though they vote on it today. The greatest con in British history will be rubber-stamped and ushered through as some sort of era-defining success. How relieved we all are that its all over and that sunlit uplands have finally arrived.

However, no-one in government has mentioned that the U.K. and EU will be locked in trade talks for years as they iron out a deal that was really only done in principle. The political declarations only touch on things like tax. So if the UK decides to slash corporation tax that it has every intention of doing – it would start a political storm leading to a tariff war.

And that’s just for starters. The entire financial services industry in Britain hasn’t done a deal yet – they’ve got another three months to thrash out a deal they couldn’t agree on before now. Separately, professional services such as doctors, engineers and architects no longer have their British qualifications recognised in the EU. For a country that relies on ‘services’ for 80 per cent of its income, you would have thought that this minor detail was agreed – which it isn’t.

State aid is another bone of contention and only time will tell if the government behaves – because if it doesn’t, the fuse will be lit and crippling tariffs will be applied in retaliation. Then there is the ‘mutual recognition of standards‘ – another minefield set to amputate relations at the first infraction – mainly because that’s not been fully agreed until tested. It only affects things like chemical regulations and data sharing and industries as far apart as pharmaceutical and aviation – so no worries then.

There’s a six-year phase-in period for car manufacturers and five years for fishing but no consideration for sports professionals, artists and musicians – all of whom now have to have visas not just for themselves but separate visas to transport their kit. Don’t forget, it now costs nearly £600 just to get the paperwork/visa for the movement of a clarinet, which takes two months to get and that only lasts one year!

We shouldn’t forget those promises made by the Vote Leave campaign headed up by Boris Johnson and Michael Gove.

This was not “the easiest deal in history.” It was hard just to come up with an outline and that is so full of holes – you can barely call this a binding trade deal.

They promised that a post-Brexit deal would involve minimal bureaucracy. It won’t, and it’s expected to cripple industry with £4billion of red-tape that we will all end up paying.

Northern Ireland’s border will be ‘absolutely unchanged’ is another lie – just as taking back control on immigration and asylum, and cut migration to the tens of thousands. The trade deal doesn’t do that and immigration has not stopped. Nor will it if the country is to function.

There is no £350M for the NHS instead of being sent to Brussels and the union is seriously threatened – both of which were not just promised but became part of a campaign over ‘project fear.’

All the new trade deals we were promised have not happened. After four and a half years, Britain has not signed one single trade deal that it didn’t have as a member of the EU – not one.

Britain will no longer continue cooperating on security issues and counter-terrorism, which the police have already stated will be catastrophic. Oh, and the taxpayer will be picking up the tab for farmers subsidies and increased unemployment as thousands of firms relocate their work to Europe.

This is not a trade deal. It’s a wait-and-see and a promise-to-behave agreement. It is destined in the years ahead to fill the right-wing press with headlines about how Brussels is crushing our economy with all manner of cooked up nonsense, the same as Johnson did to get into power. The divisiveness will not stop and Johson’s promises to unite the country are about as empty as his promises are to his own personal relationships – all of which have ended in abandonment or failure. Let’s not forget that when Johnson married his first wife, which he subsequently ‘dumped,’ Carrie Symonds – his current girlfriend, was just two months old. What chance is there of this Brexit deal being good for Britain or Boris being a good husband? Evidence and past performance tell us neither will surprise us given our very low expectations.