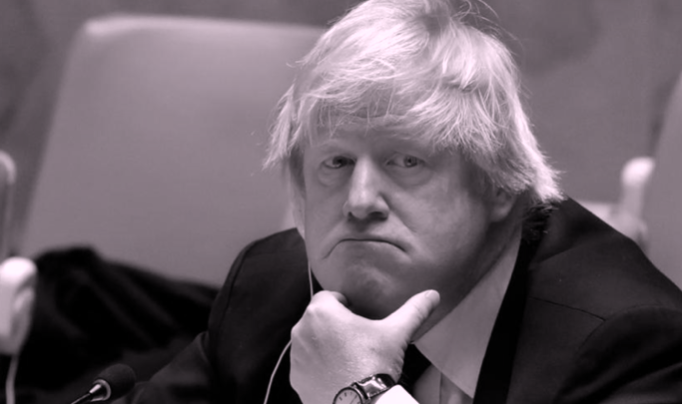 The newspapers and broadcasters lead with headlines such as – ‘The PM heads for showdown in Brussels‘ – in a bid to ‘Break the Brexit deadlock‘.

At the time of writing (Tuesday, very early) the United Kingdom is hours from knowing if we are to be cast into the trade treaty wilderness, the only large democratic modern economy in the world that may end up with no formal trade agreement with any of the super-powers. If the deal with the EU fails, so then, will any prospect of a deal with the USA. Right now, Britain has sent the most unreliable and untrustworthy individual it could have chosen to represent it in such circumstances. But this is what Johnson does – showmanship. His high stakes last-minute dash to Brussels is all part of the psychodrama of his Brexit.

The psychodrama plays into Johnson’s hands both ways. If there’s no-deal, Johnson tried his best but they refused, if there’s a deal – he alone won through in two days what the negotiators couldn’t in four and half years. Either way, it’s a stunt and its propaganda.

The truth is, EU Commissioner Ursula von der Leyen despises Boris Johnson, so does, Merkel, Macron and the majority of EU member state PM’s and presidents. Another truth is that the concept of a free trade agreement to the jihadists of Brexit, would somehow be some sort of betrayal to this Tory party – a party so divided and faction riven that Johnson is now being pushed around by everyone.

Far from being in control, the PM is floundering at every turn back at home, let alone internationally. In a local boxing match, Johnson has left the ropes, is on the floor (again) and now being counted out. Every time he gets up, thump – in comes another blow. If it’s not his own backbenchers over his woeful handling of the pandemic, it’s the ERG on Brexit. Or it’s the Northern Research Group complaining about the (non-existent) levelling-up plan or perhaps the One Nation Group who are fruitlessly trying to wrestle the hard-right back to the centre. Outside of Westminster, there’s Nicola Sturgeon threatening the break-up of the union, Joe Biden taking offence at Johnson’s stance over Northern Ireland and – Ursula von der Leyden. 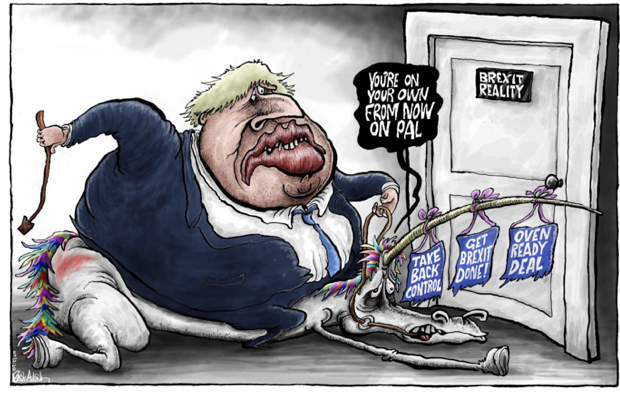 Johnson is now also facing another fearless foe, one far more damaging – the truth. In the space of 24 hours, the Tories have finally admitted that the so-called ‘Australia deal’ they kept rattling on about actually meant no-deal. They’ve even wheeled out James Cleverley to lie about the ‘oven-ready’ deal not actually being oven-ready – or indeed a deal at all. Cleverley attempted to say the ‘oven-ready deal’ that Johnson got elected on was actually the Withdrawal Agreement, which it patently wasn’t. That lie was as breathtaking as anything spewed out from this rancid government.

Lord Ricketts, is a senior British diplomat with an impressive CV. He keeps in touch with many ambassadors from around the world having held the posts of National Security Adviser and Permanent Secretary in the Foreign and Commonwealth Office. He was also posted to Brussels, Singapore, Washington D.C. and Paris.

He says that many diplomats around the world are shocked at just how badly Britain is being led and the damage Boris Johnson and the Tories have done to Britain’s global reputation. Words being used by Rickets that Britain is “badly damaged” are strong, to say the least from such a high-ranking diplomatic official, who now sits as a crossbencher in the House of Lords.

Lord Ricketts goes further – “It’s been pretty clear to observers abroad that this has been largely a psychodrama about the Conservative Party and its internal obsession with the EU. There’s a feeling that the government is in hock to a smallish group who are the hardest end of that spectrum and are prepared to ride roughshod over the usual parliamentary conventions. Boris Johnson has not established a reputation as a serious heavyweight player.” The result of which, Ricketts says, is that – “Britain has been absent from global diplomacy and obsessed with its own politics.”

In US diplomatic circles, Britain is now referred to disparagingly and as insignificant to the global order as the “Isle of White”.

The Times quotes a former cabinet minister who says – “We have gone from punching above our weight to bragging above our weight. Serious people around the world don’t like braggarts. I get the feeling people are sad for Britain, not angry. They know there are wondrous institutions and people — many want their kids to go to university in the UK — but they view our politicians as lower grade hucksters. Everyone knows Covid has been handled badly; they see Boris Johnson as cut from the Trump cloth but without the power, they think Brexit is being done without a clue. All of them think Britain is in trouble and don’t see where the renewal is coming from.” As for Joe Biden’s incoming White House team, “they all think Johnson behaves like a cad (or a clown)”.

Over the last few days, this trashing of Britain reputation is mainstream news both here in the UK and abroad. The New York Times leads with – Boris Johnson Has Ruined Britain – with its first words – “He knows that the verdict of history is about to come down on him — and bury him.” Sky News World Politics goes with “Boris Johnson risks destroying UK’s global reputation.” The New Statesman goes with – “The UK has paid an appalling price for Boris Johnson’s election victory.” Middle East Eye asks – “How did Johnson turn into the man who trashed Britain’s reputation?” The editorial board at Bloomberg reports that Johnson is causing national ruin with “its reckless mismanagement” and opines that – “The truth is, nobody seems to understand what Johnson’s government is trying to achieve, least of all Johnson.” The Times newspaper today headlines – “Who’ll want to do a deal with us after this?” – with its first words – “Ministers have undermined Britain’s hard-earned reputation abroad by riding roughshod over conventions and the law.” A Google search returns dozen of reports from all over the world saying the same.

It doesn’t stop there. Human Rights Watch decries Johnson’s attack on democracy, Reporters Without Borders laments Britain’s decline in the press freedom rankings, and the Law Society is appalled at Johnson’s attack on Britain’s legal system. All of these crises, and others too, have been caused in an atmosphere of chaos and reactionary politics and all of it surrounds Brexit. No matter your stance on Brexit – was it really worth it?

Whatever happens in this self-inflicted mess that the Tories brought upon Britain, one thing you can be sure of is a continuation of an acrimonious blame game with the EU. This current phase of the Johnson Brexit psychodrama is pure hype. It’s designed to somehow save Johnson from the trajectory of his current legacy – failure. The problem for the rest of us are that the outcomes of his failures have real-world implications – all of which will push Britain further and further down the scale of international significance.