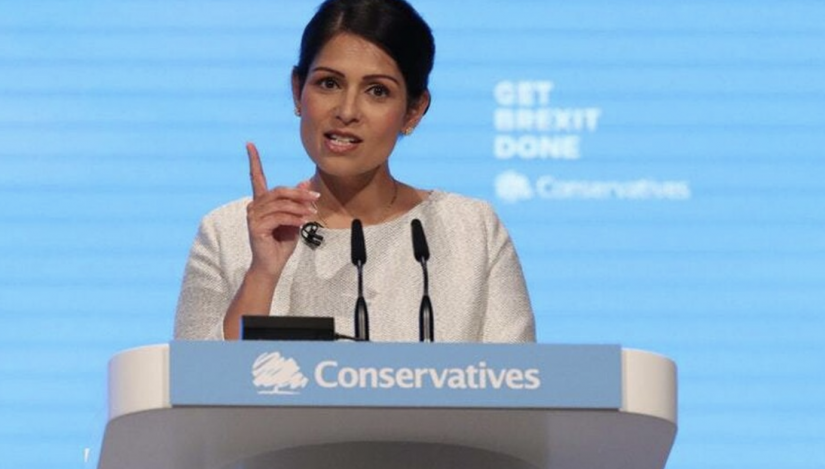 Home Secretary Priti Patel has claimed that the Conservatives are “the party of law and order once again”, as she unveiled a number of measures designed to present the Tories as tough on crime. The home secretary continued: “As we renew our place as the party of law and order in Britain, let the message go out from this hall today: To the British people – we hear you.”

Patel announced that government plans to recruit 20,000 extra police officers was “just the start.” Presumably, this would be the same 20,000 police officers cut by the Tories under Theresa May and David Cameron’s reign of failure. As one Met Police Officer wrote in May this year – “The 20,000 frontline cuts don’t even begin to cover the reality. Theresa May also sanctioned cuts to civilian staff, ambulance services, crisis teams, call handlers and the people we rely on for intelligence – we’ve lost control of the streets”

Leaving aside austerity cuts to the frontline of everything that ended in crisis on our streets, in our hospitals, in social care and just about every facet of daily life, there’s another type of law and order that should come to mind with the Conservatives.

By rights, Priti Patel should not be Home Secretary in the first place. She was forced to resign (AKA – fired) for lying to the Prime Minister, over not one, but 14 unofficial meetings with Israeli ministers and business people where 13 of them were attended by a senior political lobbyist. She had a secret meeting with Netanyahu that was not attended by any official. It is this same offence that led to Liam Fox being fired with disgrace for breaching national security over the ‘Werrity affair.’ It was also revealed that it was Boris Johnson’s department that briefed against Patel when he was Secretary of State for Foreign and Commonwealth Affairs.

Perhaps skipping over the unlawful proroguing of parliament was something not worth mentioning at the time of the conference or that pitting parliament against the judiciary is hardly ‘order’ as most of us would understand it.

Other things not to mention in Patel’s law and order speech could have included that Boris Johnson has just been accused of handing £100,000 of taxpayers cash to one of his main donors. The tax-free Singapore tax-free port idea came to light after one of Boris Johnson’s donors – The Bristol Port Company donated £25,000 directly to Johnson ahead of the Tory leadership contest. Four months later the same donor is given the £100,000 to be ‘Brexit ready’ – when it had already declared itself ready last January.

Then there’s Boris Johnson’s involvement in another scandal involving money. Jennifer Arcuri, the entrepreneur whose ‘friendship’ (since revealed as something more than a friendship) with Boris Johnson is the subject of a police watchdog investigation, loaned more than £700,000 to her own fledgeling technology company shortly before it won a £100,000 government grant.

Boris Johnson is also involved in a brewing row with London Mayor Sadiq Khan over lying about public relations expenditure and groping colleagues.

We should not forget that Boris Johnson was sacked by the Conservatives for lying about an affair with Petronella Wyatt, the daughter of the late Lord Wyatt, when he was married. He was sacked twice by The Times for lying, once for creating the so-called ‘euromyth‘ and in large part involved in all the lies about bendy bananas, sausages, cheesecakes, biscuits, £350 million on a bus and the Turkish invasion. Johnson is a known racist, a philanderer, a man who stands accused of abuse of public office of inciting violence on the streets with his inflammatory language and for pushing Britain to the very brink of crashing out of the EU with all the chaos that may bring.

This is a party whose ‘order’ sacked 21 Conservative MPs because they didn’t agree with a dictator. In all, 25 cabinet ministers, government ministers, MPs and MSPs have either quit, resigned or been sacked by Boris Johnson. Even Ruth Davidson has quit as leader of the Scottish Conservatives and his brother and sister have disowned him.

Yesterday, a Tory MP was been kicked out of the party conference after armed police were called to a “totally unacceptable” row. Sir Geoffrey Clifton-Brown was sent home from the Manchester bash after a spat erupted with a female security guard – when he tried to bring his fiancee into a VIP lounge without the right pass.

On top of all this – there is now a cabinet ethics probe into Boris Johnson’s financial backers. “A complaint was lodged in August with Helen MacNamara, director-general of the Propriety and Ethics Team, about Johnson’s financial connections to the bankrollers of his leadership campaign.”

Britain has been worn down by a lack of law and order, a period ushered in by this government with other political events such as the Windrush scandal, the cash-for-access scandal, followed up by the IEA cash-for-access scandal involving bent Tories and corporate donors. We shouldn’t forget Jeremy Hunts property money laundering scandal or links between Tories and Cambridge Analytica – the same company at the heart of one of the biggest scandals in Britain’s history. It was the Tories who can claim the first MP jailed for lying to police – a first for nearly 30 years. And then, of course, there are the countless, non-stop stories of sexual abuse, bullying and never-ending accusations of racism that infest this party of ‘law and order.’

So bad has a lack of law and order got in the Tory party that – a company fronted by the Chief Executive of the Conservative Party (who only resigned in July) is set to pay $50 million to seal a deal between the government of Guinea and a mining firm that has engaged in high-level bribery and corruption according to a recent GlobalWitness report.

In all of these events bar none, ordinary people would be hauled up by company human resource teams and instantly dismissed – quite often with a phone call to the police or National Crime Agency to take over.

And quite what Patel meant when she said that – “We are delivering on the public’s priorities while Jeremy Corbyn and Diane Abbott side with the criminals” – is anyone’s guess. The public’s number one priority has always been law and order and the Conservative party could do with looking at itself as one that abuses both with such regularity that the irony is lost on them.