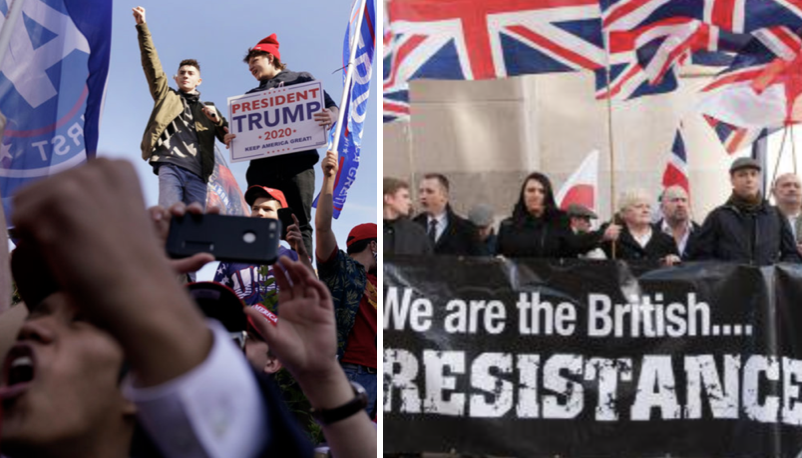 TruePublica Editor: Many commentators watching events in America state that it is simply not possible for such things to happen in Britain. Human Rights Watch doesn’t agree. In fact, HRW takes the view that Boris Johnson’s government will do lasting damage to the democratic fabric of Britain. Headlines like – “Boris Johnson’s Trump-style assault on British institutions is a threat to democracy” is now so common that your preferred search engine will return literally hundreds of results saying something similar.

Paul Krugman holds the title of Centennial Professor at the London School of Economics. His CV is almost never-ending as a distinguished professor of economics and he is, without doubt, one of the most influential economists in the world.

This week, Krugman encapsulated what happened in America in just three sentences:

“The basic story of the Republican Party is that it was taken over by plutocrats, who invited racists and conspiracy theorists into the tent because they thought it would help them cut taxes. Then they woke up one day and realized that the crazies were in charge.

And almost no elected Republicans have refused to go along. It’s not just the humiliation of Rubio and Graham by Trump; it’s the subservience of the whole party to madmen and thugs.

Anyone who might leave in disgust has already left. There is no bottom for those who remain. Don’t expect any crimes, no matter how heinous, to make a difference.”

What has happened in American politics in the last four years – has already happened in Britain to a certain extent in the last year. And the similarities are very concerning.

The Conservatives were led by an Etonian where two-thirds of its party were made up of millionaires – who also had high paying second jobs on the boards of companies lobbying for change in their favour.

Many Conservatives started becoming members of right-wing organisations and taking cues from their successes in America and realised that by dividing society through culture wars, it could redefine its electorate with deceitful slogans and empty promises.

From there it purged its most experienced and centrist political figures and replaced them with the sycophants of its new economic ideology – a campaign designed around British exceptionalism. Their donors, the kleptocrats, now have real power at the heart of government. In America, this campaign was called Make America Great Again or MAGA. In Britain, it was called Brexit.

Their newfound powers led to domestic and international lawbreaking and the undermining of civil society by attacking the institutions that uphold justice, civil liberty, press freedom and human rights.  From here, just as Krugman says, there is no bottom of the barrel. Profiteering from starving children, lining the pockets of donors in a pandemic, promoting their own into inappropriate positions of power – is to name but a few.

What do you think this Tory party will do as it approaches an election in 2024/5? Do you really think they will provide a level electoral playing field? Or will they do as they have done and use illegal tactics and practices through media manipulation, voter disengagement strategies, propaganda and deliberately ramp up the culture wars for their own gain?

Don’t forget who these people are; Priti Patel – a hard-right wing political bully who wants to bring back the death penalty and promoted Theresa May’s most toxic legacy – the hostile environment. Then there’s Dominic Raab – the party’s finest curator of ‘alternative facts’. And let’s not forget the Lord’s own representative on earth and chief of democratic distortion Jacob Rees-Mogg or the minister who would represent women’s right – Mark Francois. Both Boris Johnson and Gavin Williamson have been considered at some point a threat to national security. And who could forget that 21 long-serving centrist career Tories were fired by Johnson for daring to disagree with him.

Don’t also forget that the ERG – the fanatics of the free-market are just that – political extremists. So extreme in fact, that Boris Johnson’s hard Brexit simply isn’t hard enough and that we are where we are directly because of them. Or that the right-wing CRG (the Covid Research Group) are less bothered by the body count than they are pubs being open.

And if they lose the next election, do you really think they will do so graciously and smoothly hand over the reins of power to a political party that was elected to undo all of their work? More results from your search engine will show centrist political commentators saying things like – “Boris Johnson empowered the thugs that shamed British democracy.” But when a right-wing paper such as The Telegraph headlines with “Boris Johnson’s ‘strongman’ Government is destroying democracy” – you know you’ve been warned. And when the Daily Mail (we don’t do links to the DM) promotes Britain’s MAGA campaign by headlining that Johnson will make the UK – “the greatest place on Earth” you know where this is leading.

Where did it really end up for America. Leaving aside Trump’s history-making second impeachment – it is Incredible to think the US Government is, for a moment, classed as a pariah administration. Mike Pompeo has been forced to tear up his schedule in Brussels on a NATO visit after no senior EU official was prepared to meet him. He was even snubbed by Luxembourg’s foreign minister! Can you imagine such a thing happening to a British PM?