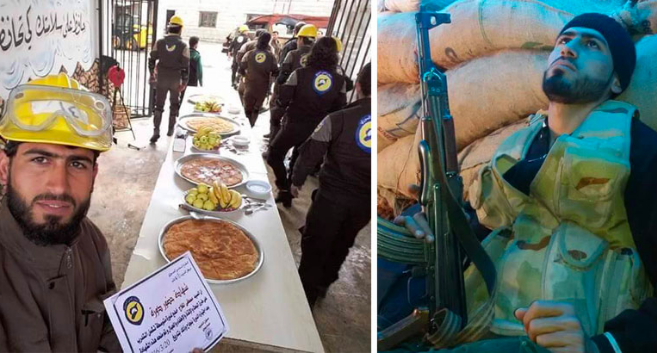 If Osama Bin Laden was not sufficient warning that decades of money, arms and other support from the Western security services does not render a jihadi a friend of the West, then the Manchester bomber, Salman Abedi, should have opened British eyes forever to the danger. In collaboration with MI5, Abedi had been fighting in the ongoing proxy war for Western oil interests in Libya, before being rescued by the Royal Navy. Back home in Manchester, he carried out an attack of appalling violence against a primarily young and female target group.

So it would be very foolish indeed to rely on the fact that the jihadi logistic support and propaganda group the White Helmets is largely British government funded, to expect its members who are now, like Abedi, being brought into the UK, to behave as quiet citizens. The links of the White Helmets to Al-Nusra and Al-Shams and other jihadi groups are deep – they chose to be evacuated to Idlib together from numerous sites. The reason there is no substantial corpus of independently filmed evidence of the White Helmets’ work is that they co-operate with people who would chop off western journalists’ heads on sight. In many well-attested cases, they are the same people.

In ending all funding to the White Helmets, the Dutch government did not wish to be confrontational towards the other neo-conservative governments who are funding and exploiting the propaganda from the White Helmets. Their report was therefore diplomatically phrased. Funding for the White Helmets may have “inadvertently” fallen into the hands of armed extremists, while unacceptable contact between the White Helmets and extreme jihadists was “inevitable” in the areas they operated.

Thanks to social media, there is an awareness among the UK’s general population of who the White Helmets really are, that belies the solidarity of the entire political and media class in maintaining the official fiction. Even the arch government supporting Daily Telegraph in reporting the story of White Helmets’ admittance to the UK, has a majority of readers’ comments pointing out the true nature of the White Helmets. (Being a Tory paper, there are naturally other comments which are simply Islamophobic).

Which is, of course, the irony of this. Entirely innocent British Muslims face the day to day surveillance state harassment of the Prevent programme, where Muslim students pursuing security studies are reported to the police for reading books on terrorism, and school pupils are reported for expressing opposition to the mass bombing of Libya by NATO or arms sales to Saudi Arabia. I cannot give a talk in a university about Palestine without a Prevent strategy risk assessment being formally compiled by the university authorities and approved by the police.

Yet not only has the largest terrorist attack of the last decade been committed by somebody working with MI5 and brought into the country by the Royal Navy, we are now importing jihadis with no prior connection to the UK other than receipt of British government funding.

Britain has never had larger or better-funded security services. As a major economic interest in its own right, the “security industry” has grown into a major component of the military industrial complex. Just as the arms industry requires external enemies, the security industry requires internal enemies. It is notable that many of the “foiled” terrorist plots of the last decade involved prior MI5 contact, sometimes bordering on agent provocateur operations. “Prevent” produces enemies who are not actually enemies at all.

Nobody has consciously decided to import the White Helmets to maintain the internal terrorist threat in the UK. But institutions, on analysis over time, almost always promote their institutional interest. Increasing the terrorist threat in the UK undeniably serves the economic self-interest of the security industry. Just as the promotion of war and internal tension has always benefited the arms industry and the rest of the military industrial complex. Importing the White Helmets into the UK is obviously nuts if your purpose is to minimise jihadi activity in the UK. So we have to ask, is that really the purpose?