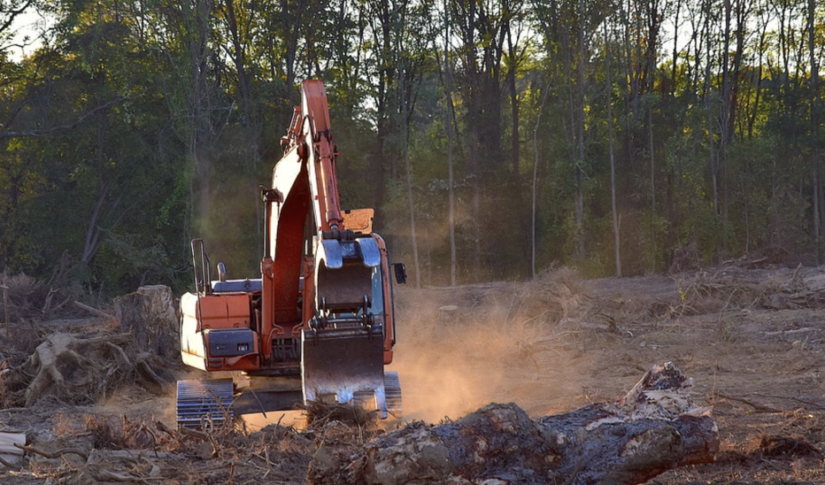 By TruePublica: While everyone is keeping a keen eye on how the pandemic is going, the controversial and despised HS2 rail project continues. Right now, it is illegal to cut trees down and rip out hedgerows. Between March and August, it is nesting season and if you spot a neighbour tearing out or cutting down a hedge with nesting birds – you can ring the police and get a crime number.

But HS2 workers are permanently destroying miles of trees and hedgerows, touting wildlife laws and committing countless wildlife crimes – ones that you and I would be prosecuted for.

Ancient woodlands are being felled – indeed, HS2 represents the biggest deforestation project in Europe for decades. “Irreplaceable” natural habitat is being destroyed. Wetlands, wildflower meadows and historic wood pasture – including five sites of international importance are to be literally wiped out.

Nikki Williams, the director The Wildlife Trust said – “HS2 will destroy precious carbon-capturing habitats if it’s allowed to continue in its current form. It will damage the very ecosystems that provide a natural solution to the climate emergency.”

It’s hardly surprising to hear Williams say this as the project rips up 108 ancient woodlands along the way as it spends an astonishing £108billion of taxpayers money.

There is “overwhelming evidence” that the costs of HS2 are “out of control” and its benefits overstated, the deputy chair of the HS2 review panel has said. But Tory ministers want to leave a vanity project to pin their names on.

HS2 Rebellion have stated that the government has taken the opportunity of the country being on lockdown to ignore laws protecting wildlife whilst they cannot be scrutinised.

“HS2 has cleared hundreds of trees during bird nesting and wildlife breeding season, flouting wildlife laws. Campaigners have witnessed HS2 ripping down trees with bat boxes and birds nests in them, then immediately chipping the evidence.”

Their actions took place along the HS2 line – including Euston, Colne Valley in Uxbridge, Steeple Claydon and Wendover in Buckinghamshire, and Crackley and Broadwells woods in Warwickshire.

HS2 Rebellion is calling for the government to stop HS2 and direct taxpayers’ money to the NHS and prioritise health and the environment.

Matt Bishop, HS2 Rebellion campaigner in the Midlands, said: “The worst wildlife crime in Warwickshire’s history is taking place now. HS2‘s own bat survey confirms that the felling of trees in Broadwells Wood and Kenilworth sites will cause the permanent loss of 1,491 potential bat roosts of eight species of bat, all protected by law. Yet Natural England, charged with upholding that law, has allowed HS2 to be self-policing in accepting a statement from them that ‘no bats had been encountered during the works’, and has given the go-ahead for HS2 to continue felling well into roosting season, while bats are still nursing their young.”

The Government has decided to press on with HS2 in the midst of the covid-19 pandemic, and financial, ecological and climate crises – despite fierce public opposition and criticism from MPs, the Public Accounts Committee and Public Transport Committee.  The Boris ‘chop-down in lockdown’ makes a mockery of his claims to be committed to restoring nature and hitting net-zero greenhouse gases by 2050. HS2 fails both these objectives as it is adding to nature’s crisis and will take more than 120 years before it reaches anything like being carbon net-zero. While the nation has been locking down and knowing fewer people would be around to witness or protest, HS2 Ltd is felling irreplaceable ancient woodlands as fast as possible and putting all incriminating evidence through the shredder.

Britain’s leading environmental organisations, including the Woodland Trust and RSPB, have warned against felling trees in nesting and breeding season but HS2 Ltd has repeatedly ignored their advice and wildlife laws, while the nation and the media have been focused on the battle against COVID 19.

Joe Nunez-Mino, Director of Communication and Fundraising at the Bat Conservation Trust commented: “Reports we have been receiving about potential disturbance and damage to bat roosts in trees during the maternity season is a cause for concern for BCT. We are investigating the matter as protecting maternity roosts from disturbance at this sensitive time of the year is particularly important.”

HS2 Ltd does not have a reliable history in mitigation or carrying out ecological assessments. In the past, their reports have claimed wildlife is not present, when in fact the woodlands they are set on destroying are teeming with life. They also broke the terms of their badger mitigation licence by allowing construction works to continue for more than six weeks next to a huge badger sett in Broadwells Wood, Warwickshire. Natural England refused to send out field officers during the pandemic, so there has been no official scrutiny of HS2 works. Campaigners remain at all camps to bear witness to HS2 wildlife crimes.

HS2 Ltd are being taken to court by wildlife TV presenter and conservationist, Chris Packham CBE, supported by evidence from the RSPB and the Woodland Trust and campaigners on the ground. The Court of Appeal has recently granted a hearing to decide if a full Judicial Review of the government’s decision to give the go-ahead to the controversial rail project will proceed. One of the reasons for this hearing is due to, ‘the considerable public interest in the case’.

We should not forget that as the Covid pandemic eases and we all start to open our front doors again – the British public now has a very different attitude to what life should look like. The number one political interest subject for British people is now very firmly the environment. And there have been numerous reports that millions of people will continue to work from home. Who, therefore, needs a train service to knock 20 minutes of a journey that takes 125 years to become carbon neutral in a renewed climate crisis battle where travel will be discouraged in future anyway?

HS2 And Heathrow: “Not In The Public Interest” – Disasters In Waiting