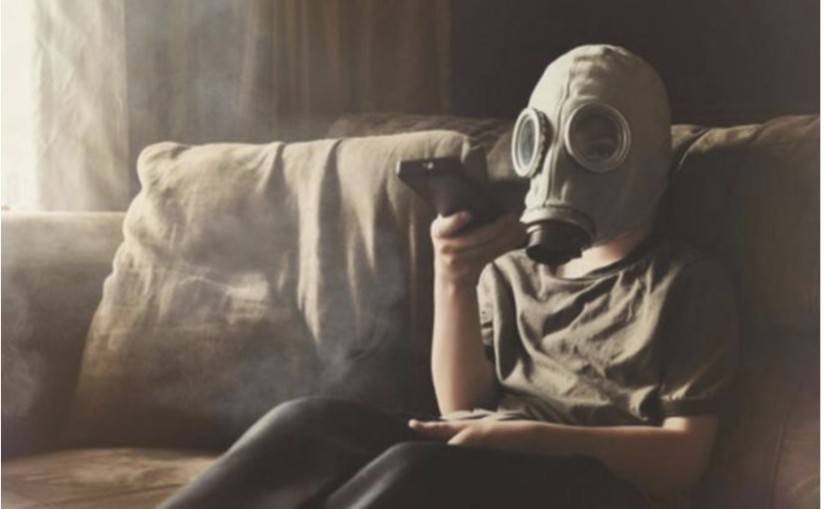 By George Monbiot: Everything gets buried by something (Brexit and Covid-19)– that, after all, is the point. It’s the great disrupter and the great distractor. Under the cover of chaos, essential public protections are destroyed. Take the scandal that should be creating headlines everywhere: the toxic flame retardants now penetrating the lives of everyone in the UK. If you don’t know what I’m talking about, that – as far as government and industry are concerned –  is job done.

Every night, millions of children and adults sleep on mattresses treated with a class of chemicals that was long ago banned from sheepdips and pesticides. Every day, we sit on furniture containing the same toxic compounds, absorbing them through our lungs and skin. According to Parliament’s Environmental Audit Committee, mothers in the UK and the US have the world’s highest recorded concentrations of a toxic class of flame retardants in their breastmilk. Banned fire retardants have recently been discovered in umbilical cord blood. We have no clear idea of how they might affect the development and future health of foetuses. But we know that they are persistent, accumulative, and are associated with cancer and disruption of the hormone and reproductive systems.

Until 2016, when he blew the whistle on spectacular malpractice within government, Terry Edge was the lead civil servant working on fire safety regulations for furniture. His research shows that, due to decades of industry lobbying, homes in the UK have the world’s highest levels of dangerous flame retardants[]. It took until last year for mattresses and furniture containing the highly toxic retardant deca-BDE to be banned, under European law, from sale. Instead of prohibiting all such dangerous, persistent organic chemicals in furniture, the UK government has allowed one hazardous pollutant to be replaced by others (TCEP, TCPP and TDCP).

Even when such furnishings are removed from our homes, the hazard persists, as, in defiance of the Stockholm Convention the UK has signed, they are still dumped in landfill, or burnt in incinerators at temperatures too low to destroy the toxic chemicals they release. Scarcely monitored, with unknown effects, these poisons steadily seep across the nation.

To make matters worse, far from saving us from fires, flame retardants appear to increase the risk. This is because the furniture containing them produces poisonous byproducts, including hydrogen cyanide, dioxins and furans, when it smoulders. Since the 1990s, most of the deaths and injuries inflicted by fires have been caused not by burns but by inhaling toxic smoke. Terry Edge contends that many of the deaths in the Grenfell Tower are likely to have been caused by toxic emissions from furnishings, but that, as a result of the influence of industrial lobbyists, this cause has not been properly considered in the inquiry. A paper in the journal Chemosphere shows that furniture made from tightly-woven natural fabrics is no more flammable than furniture treated with flame retardants, and produces far less toxic gas.

As Trump has done in the US, Johnson will do to the UK: trading our health and wellbeing for favours to his supporters. Under the cover of chaos, released from European oversight, corporate power accumulates like a persistent toxin in the bloodstream of the nation.

But using flame retardants is cheaper. Thanks to poorly drafted rules, unreformed since 1988, furniture and mattress manufacturers have been able to meet the government’s standards by slapping these chemicals on their products. Some companies want the regulations changed, so they can make safer products and still compete on price. Others are determined to keep using flame retardants, despite their dangers. As usual, the government has sided with the careless operators against the responsible ones.

After the Environmental Audit Committee published its report last summer, and the media finally began to take an interest, it looked as if all this might change. But then the issue, like so many others, was bulldozed by Brexit. It has disappeared into what looks like total regulatory chaos. Last November, a House of Lords inquiry asked a series of massive questions that the government was been unable to answer properly. Nor has it yet been able to respond to a similar set of questions I put to it this week.

How will synthetic chemicals be regulated in this country, following Brexit? Will the UK simply adopt the European system? If so, how will it obtain the information on which EU risk assessment is based? If it doesn’t have this data, how can the government fend off legal challenges from companies seeking to use dangerous substances? Alternatively, will the UK create a system of its own? If so, where is it? Or will this country become a deregulated zone, a dumping ground for chemicals that can’t be sold in the EU? If we know anything about this government, it’s that it will find a way accidentally to lose our public protections down the back of the toxic sofa during the turmoil of transition.

Already, we have seen how the environment, agriculture and fisheries bills seek to replace European rules protecting the natural world with vague promises, financial incentives and handwaving. We’ve seen the government announce a new “red tape challenge”, after learning nothing from the way in which similar deregulatory schemes contributed to the Grenfell disaster and other gross failures. Even before we diverge from European standards, under Boris Johnson’s misrule the UK is becoming one of the world’s worst financial secrecy regimes, as the City of London, correctly reading the political signals, provides an ever warmer welcome to tax avoiders and money launderers.

As Trump has done in the US, Johnson will do to the UK: trading our health and wellbeing for favours to his supporters. Under the cover of chaos, released from European oversight, corporate power accumulates like a persistent toxin in the bloodstream of the nation.

George Monbiot is a Guardian columnist and the author of Feral, The Age of Consent and Out of the Wreckage: a New Politics for an Age of Crisis