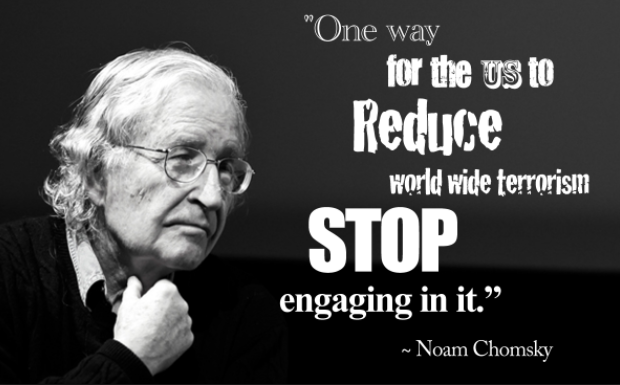 As an American investigative journalist, documentary filmmaker and novelist, André Vltchek has covered countless armed conflicts around the world. Among his most recent work we find “On Western Terrorism”, a discussion with Noam Chomsky, a renowned expert on propaganda. Together, they explore the legacy of colonialism that lasts to this day and denounce the hypocrisy of the West in regard to terrorism since it is largely responsible for its development. We have interviewed André Vltchek to get his thoughts on the book and much more.

All along your passionate discussion with Noam Chomsky, you expose facts about imperialist interventionism in recent history, in Asia, Latin America and the Middle East. What was the purpose of switching the focus from the alleged enemies of the West and onto the West itself?

For several long centuries, the West has been plundering the world militarily and economically. In order to ‘legitimize’ its crimes, it also manufactured extremely complex and effective propaganda system, imposing its ‘logic’ and cultural dogmas on the rest of the world. It was done with such persistence and skill, that basically all other narratives disappeared.

It is actually a tremendous tragedy, because several conquered cultures were clearly superior and much more humanistic than the West. The result is: natural, logical development of the world has been derailed, even crushed. Only Western dogmas prevailed, bringing imbalance, confusion, anger and frustration to the world.

Like Noam Chomsky, you are also a very prolific author. How would you describe your work and Chomsky’s work? And how was the experience of preparing this book?

Noam and I are using different ‘tactics’ to fight against this despicable situation. Noam is a linguist, great theoretical thinker and an activist. He is analyzing the situation in his non-fiction books, which are actually his great philosophical works. He is also speaking publicly, on virtually all continents.

I go directly to the sources, as I don’t essentially believe anything that I don’t see or touch, anymore. I try to recycle as little as possible. I travel to warzones and to the deadliest slums, speaking to top intellectuals but also to the poorest of the poor. 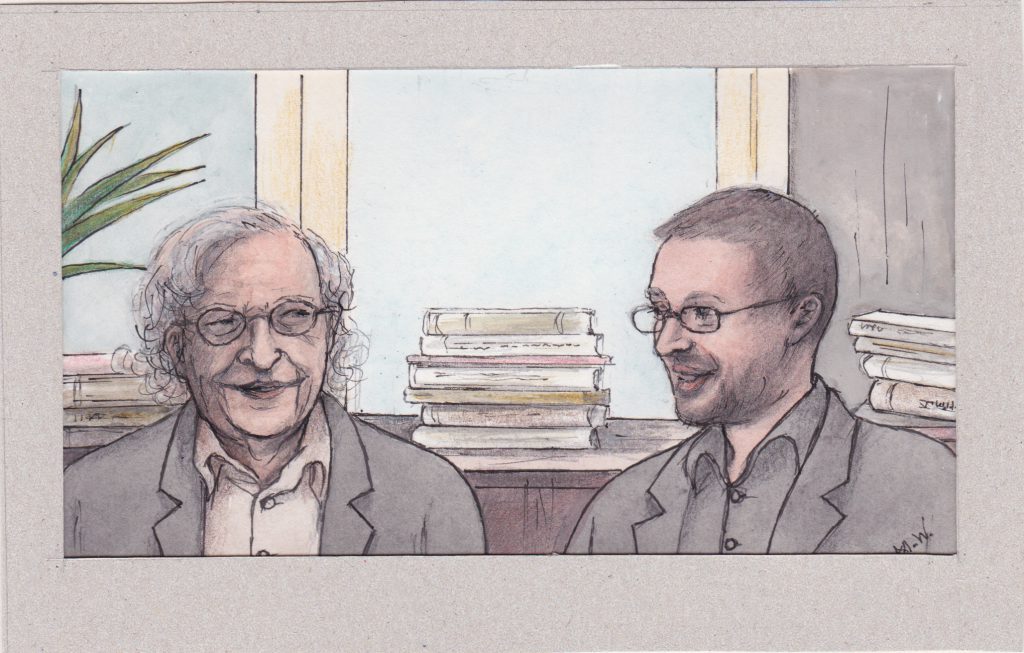 I count on extremely complex web of sources, in many countries. Then I write my essays, which are later changed into chapters of my non-fiction books. Or I write my novels, which are always at least to some extent political, or mainly political. Or I make documentary films, for TV stations like Telesur or Al-Mayadeen.

My latest book, which actually unmasks Western propaganda worldwide has over 800 pages and is called, tellingly, “Exposing Lies Of The Empire”. My recent novel on Western cultural imperialism is “Aurora”.

Noam and I compliment each other. And we really enjoy each other’s company. When we work together, there is nothing forced. We don’t always agree 100% on everything, but we very rarely strongly disagree about essential political issues.

What do you think about the evolution of the terrorism context and the revival of the “war on terror” speeches by western leaders?

Terrorism is essentially what the Western empires and now the American Empire have been using against the rest of the world.

Even after the WWII, Muslim countries were leaning towards socialism. Therefore, they had to be derailed, ruined and ‘radicalized’ by the West!

The West basically wrecked the three most important Muslim socialist states: Iran, Egypt and Indonesia. Then it used Afghanistan and Pakistan as proxies in its war with the Soviet Union, basically shattering these two countries as well.

Absolutely. I am arguing in several of my essays, as well as in “Exposing Lies Of The Empire”, that the West, for understandable reasons, has been directly manufacturing ‘Muslim terrorism’. Therefore, we shouldn’t even use the term “Muslim terrorism”.

I witnessed the process in Turkey, Syria, Lebanon, Indonesia and elsewhere. It is shameful what is happening, but it is logical (given the Machiavellian essence of Western imperialism): the West managed to destroy the Soviet Union, it debased the anti-colonialist struggle/process (by killing or overthrowing people like Lumumba, Mosaddegh, Sukarno or Allende), and then it ran out of ‘big enemies’.

The West cannot exist without ‘big enemies’, as we all know. And so it created one really mighty one out of nothing, and royally screwed all Muslim countries in the process. Recently, in Tehran, two top philosophers there told me, that the West actually created, in many places, a totally new religion, which doesn’t have anything in common with Islam. 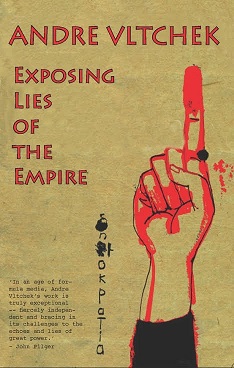 “Exposing Lies of the Empire (…) is a book of philosophy,
a collection of exceptional investigative journalist reports, and a manifesto.”

Third world views on the north-south relations has been under attack and de-legitimation on a regular basis by neo-conservative thinkers, who consider economic-centered political analysis as “obsolete and old fashioned”. Could we say that the promoters of the so-called “clash of civilizations” have reached their goal? Which real interests are behind their way of thinking?

Yes, it is happening, but the guilty are not only the neo-conservatives, but also so-called liberals. I just left the city of Bandung (in Indonesia), which was hosting, in 1955, that famous “Asia-Africa Conference” (cradle of non-aligned movement). When you see the old photos there, you’d want to cry… Or scream!

The desire of the non-Western world for independence, for true freedom was so strong in those days, but the brutality of the West broke all courage and determination of all, except a handful of the nations. For decades, the spine of the resistance against Western imperialism had been cracked. Only now we see great resurrection of those old ideologies, goals and dreams.

Of course there is and will be huge clash of civilizations, but it will occur under different banners and with different logic than what is being promoted by the Western idéologues.

Truer ‘clash of civilizations’ will be very simple and positive: it will have form of a resistance struggle of the oppressed world, against the Western terror, which has been brutalizing our planet for hundreds of years.

You have frequently visited and lived in Latin American, Arabic and Asian countries for many years. In your opinion, how should progressive forces deal with issues concerning cultural identity and ethnic-entered conflicts in the XXIst century? Is the Eurocentric view a big trap for those who try to understand and change the world?

Yes it is, and it is essential to understand this point!  Progressive forces in the West should, I believe, step back and be more humble. Instead of constantly preaching and showing their hatred against every left wing government in Latin America or Asia, they should learn some respect and the Chinese or South American cultures, and try to understand how things have been done there, historically.

The Western left lost squarely and patently. The hope is now in Latin America and Asia, and some very few countries of Africa. The Western left, I think, should stop being ‘purist’ and support what we still have in this world, instead of defining ‘who is a true Marxist and who is not’, etc.

The main struggle now should be the struggle against Western imperialism. I know the world, and I am convinced that if Western imperialism were defeated, the rest of the world would find a way to coexist peacefully, and to build a humane, much gentler and compassionate world. Then, and only then, we could start paying attention to details. Until then, rescuing our planet from what has been for centuries ruining it should be our sole goal.

Andre Vltchek is a philosopher, novelist, filmmaker and investigative journalist. He has covered wars and conflicts in dozens of countries. Three of his latest books are the revolutionary novel “Aurora” and two bestselling works of political non-fiction: “Exposing Lies Of The Empire” and “Fighting Against Western Imperialism”. His other books are available here. Andre has also been producing documentaries for teleSUR and Al-Mayadeen. Watch Rwanda Gambit, his groundbreaking documentary about Rwanda and DRCongo. After living in Latin America, Africa and Oceania, Vltchek presently resides in East Asia and the Middle East, and continues to work around the world. He can be reached through his website and on Twitter.