Is Julian Assange About To Be Arrested? 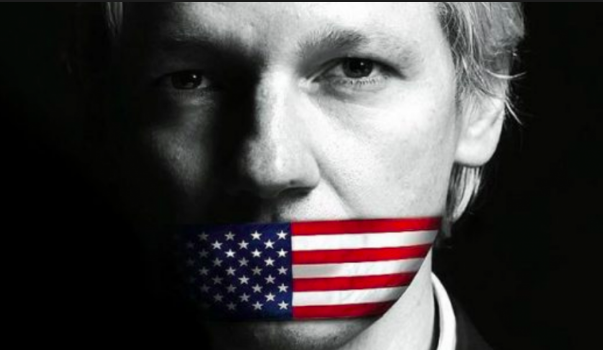 By TruePublica: According to numerous mainstream media reports, WikiLeaks founder Julian Assange is about to be forced to leave the Ecuadorian embassy in London. If that happened, he would face imminent arrest by British authorities and extradition to the US, where he would probably face life imprisonment on the one hand or execution on espionage charges on the other. The latter being the preferred option for the Trump administration.

It has now been exactly two months since Assange has been denied visitors and any outside communications since the Ecuadorian government cut off his access on March 28. He has no internet, phone, television and is no longer allowed visitors at all.

The truth is, no-one actually knows if Assange is still actually on the Ecuadorian premises.

Ecuador gave citizenship to Assange prior to their recent general election in the hope of providing safe transit out of England by giving him diplomatic status. However, the British government continued in its assigned role of jailer by fully rejecting Ecuador’s request for diplomatic status for Assange.

A British tribunal refused to release any documents pertaining to the reasons as to why Assange remains in an effective prison, at taxpayers expense, on the grounds that it had to protect the British Prosecution Service’s relationship with foreign authorities – in this case, the USA.

Britain is doing Washington’s dirty work and given the heavily increased ‘chatter’ on Assange’s fate – it is quite likely the British government is looking for public reaction to be muted enough to simply arrest him, go through the motions and send Assange to certain solitary confinement on death row.

The signs are not good. Since the new Equidorian President Mr Moreno was recently elected he described Mr Assange as an ‘inherited problem’ and ‘more than a nuisance.’

Mr Assange’s lawyer, Melinda Taylor, said: “For the last eight years, the UK has refused to either confirm or deny that they have received an extradition request from the US. ” Taylor continued:

‘At the same time, they have refused to provide assurances that Julian will not be extradited to the US if such a request were to be received, and maintained an ever-present vigil of the Embassy, notwithstanding a UN directive to take steps to ensure Julian’s immediate liberty. Their silence speaks volumes, particularly in light of recent statements from US officials that Julian’s arrest and extradition are a priority.'”

Foreign Policy Journal opines that:  “Britain, as the most servile of Washington’s puppet states rejected the order by the UN Committee on Arbitrary Detention to immediately release Assange from his arbitrary detention.”

The mainstream media have obviously been alerted to quite possibly what will happen next. The language of the salivating establishment press is all too clear and clear:

Nowhere does the media report in this latest round of growing excitement that the United Nations has already fully stated that Assange’s detention is illegal based on international law. In a public statement, the UN called on the British authorities to end Julian Assange’s deprivation of liberty, respect his physical integrity and freedom of movement, and afford him the right to compensation.

Julian Assange is a political prisoner of Britain. This is a country who teaches its children by law, through a defined curriculum that British values include: “democracy, the rule of law, individual liberty, mutual respect for and tolerance of those with different faiths and beliefs and for those without faith.”

Irrespective of your personal thoughts on whether Assange is a criminal or not, two of the five most basic principles of civil society in Britain has been completely discarded by the state in its subservience to a foreign power, in this case, Washington. It is a further sign of the breakdown of law and order in a country who once prided itself in such characteristics as justice.