Is This The Epicentre of Corbyn’s Antisemitism Story? 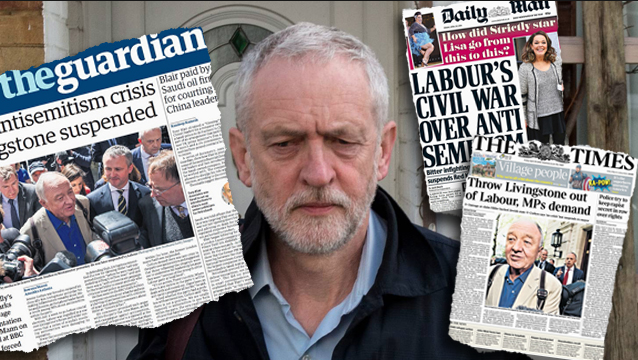 By TruePublica: The British-American Project for the Successor Generation, to give it its full title, was officially founded in 1985 – “to perpetuate the close relationship between the United States and Britain,” and in the words of BAP’s official history, through “transatlantic friendships and professional contacts”. Today, It has a membership of over “1000 leaders and opinion formers”, drawn equally from both countries. It was conceived in 1982 by Nick Butler, a Labour Party insider of the old right and a research fellow at the Royal Institute of International Affairs (known as Chatham House). It was funded by the far-right oil baron J. Howard Pew and launched by (neoliberal) US president Ronald Reagan and right-wing media baron Rupert Murdoch.

There is a very good reason why this organisation has a reputation for being described as the ‘Trojan Horse of America’s foreign policy in Britain’. Although it rarely features in the mainstream media and journalists are not invited to conferences or meetings, the organisation recruits Britons of liberal or left-of-centre inclinations of political talent (and connections) when they are young. As the Guardian article of 2004 said – “They are indoctrinated with propaganda about the virtues of American capitalism and of America’s role in the world and then watches them approvingly as they steer British politics in an ever more pro-Washington direction.”

The project’s greatest success was New Labour. One only has to think of a so-called liberal left-leaning political party cooking up lies such as the ‘dodgy dossier’ and using it to contribute to the killing a million innocent civilians – as it was in Iraq – such is the scale of their influence.

In the years immediately before the founding of BAP, the early 1980s days of Tony Benn and CND, the Labour party was sceptical about America. In the late 1990s under Blair and Co, it was swallowing almost anything the US did, said and asked of it. But that has now changed with the arrival of Jeremy Corbyn. Yesterday’s so-called revelations in The Times (a Murdoch asset) about anti-semitism in the Labour party, completely debunked by shadow attorney general Baroness Chakrabarti, is yet more evidence of the ever more desperate measures being deployed to save Theresa May’s government imploding neoliberal government.

Smeeth then staged a stunt at a press conference where Corbyn was launching a report into the manufactured claims from Labour’s right wing that the party under his leadership was anti-Semitic. Smeeth stormed out of the meeting, with her office later claiming she had been reduced to tears. She made an official complaint to the party after claiming, “a Jeremy Corbyn supporter” had “used traditional anti-Semitic slurs to attack me for being part of a ‘media conspiracy.’

Smeeth claimed that under Corbyn, Labour was not a “safe space for British Jews”. She called on Corbyn to stand down as the leader of the party – “immediately and make way for someone with the backbone to confront racism and anti-Semitism in our party and in the country.”

In the meantime, the Chicago based news outlet – Electronic Infatada reported in December 2016 in an article entitled – UK Labour MP Ruth Smeeth was funded by Israel lobby:

“official records show that Ruth Smeeth was funded by two ultra-wealthy figures from the same pro-Israel organization she once worked for. But these relationships have been overlooked by the British press, which have extensively reported on her allegations of anti-Semitic abuse at the hands of Jeremy Corbyn supporters.”

Access to a system where disinformation like Jeremy Corbyn’s anti-Semitism story can be promoted, in this case, comes via the British American Project. This could partly be because Ruth Smeeth is married to Michael Smeeth, a member of the executive body of BAP.

BAP includes a number of prominent UK and US journalists and broadcasters among its membership. A UK journalist, Yasmin Alibhai-Brown, told the Guardian of one BAP conference: “The amount of drink, the way you were treated, the dinners with everyone who was anyone used to come a lot. It was money that I’d never seen at any conference before. We used to joke, ‘this is obviously funded by the CIA.”

And as it turns out, joking may have been some sort of defence mechanism because it then transpired that Ruth Smeeth was, according to a Wikileaks cable – an intelligence asset of the United States.

“What is generally not known is that Ruth Smeeth was identified by WikiLeaks, via a US embassy diplomatic cable, as a “strictly protect” – US informant.”

The cable, dated April 24, 2009, was one of more than 251,287 made public by WikiLeaks and is headed “UK POLITICAL SNAPSHOT”. It notes, “Labour Prospective Parliamentary Candidate for Burton [the seat she contested and lost, prior to winning another in 2015] Ruth Smeeth (strictly protect) told us April 20 that [former Labour Prime Minister Gordon] Brown had intended to announce the elections on May 12, and hold them after a very short (matter of weeks) campaign season.”

The cable ends: “(Note: This information has not been reported in the press.)” 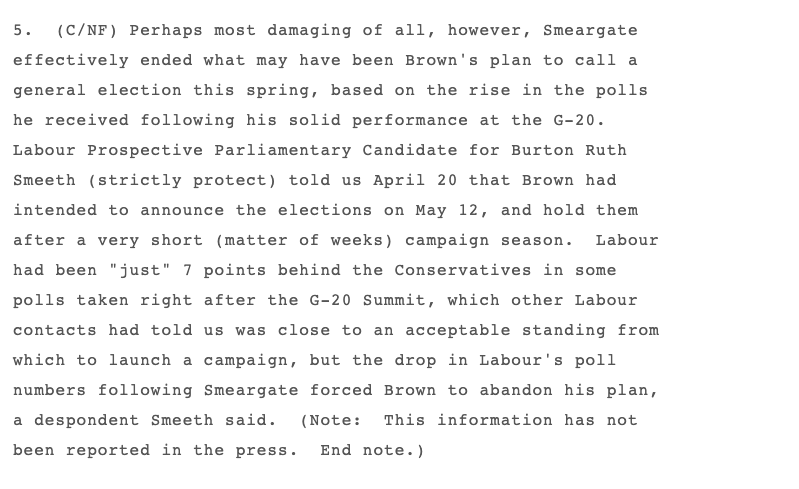 Wikileaks – US cable published as “Classified – UK political Snapshot”. Ruth Smeeth is identified as a US Informant to “be protected.” CLICK HERE FOR FILE

The cable testifies to the intimate connections that Labour’s plotters have to the US state and its intelligence agencies. And this is more than likely just the tip of the iceberg as is usual in cases such as these. For instance, global corporations are involved in BAP.

Ruth Smeeth, is today, still right at the heart of the anti-semitism story. A quick Google search provides numerous mainstream media articles and never-ending hit pieces that roll on day after day.

And so to summarise, a Labour MP, with proven deep connections to right-wing Israeli organisations, married to an executive of a right-wing think tank that was funded by Murdoch and other neo-con organisations has been trying to bring down Jeremy Corbyn who has sympathy with the plight of the working class and that of the Palestinian people in particular.

Mehdi Hasan -Columnist at The Intercept and host of the Deconstructed podcast has stated publicly that:

“I’m being told by people I trust that the Sunday Times may have got parts of this Labour/antisemitism story seriously wrong, which wouldn’t surprise me. Watch this space.”

For balance, even Kenneth S Stern, the author of the International Holocaust Remembrance Alliance definition of antisemitism (which the Labour party has endorsed) has spoken against constant unfounded slurs against Jeremy Corbyn.

There is no doubt that in a party with over 500,000 members, the biggest in Europe, there are going to be those with views anathema to certain groups. And there is no doubt that antisemitism exists in the Labour party. But the same applies to all mainstream political parties and emerging voices on the right and left. For the Tories, it is a clear hatred of black people as Windrush demonstrates. For Tommy Robinson, it’s Muslims. For the left, it is conservatism, for the right it’s liberalism – the list goes on.

Evidence of American infiltration of the British government emerged when it was leaked that following Tony Blair’s first election victory in 1997, the BAP released a private circular headlined, “Big Swing To BAP.” The circular stated, “No less than four British-American Project fellows and one advisory board member have been appointed to ministerial posts in the new Labour government.”

Joel Stein, a well known American journalist wrote of BAP in a Los Angeles Times article after attending one of the ‘conferences’ as a potential member – “the British-American Project is a CIA front, a tool for converting Brits into neocons.” He also wrote that BAP was funded by huge corporations such as JP Morgan, UPS and BP, and Paul Wolfowitz (the architect of the New American Century that Bush/Blair used to blow up the Middle-East) is on the advisory board.

To confirm corporate influence – John Pilger wrote in a December 2007 article published in the New Statesman, “Since 1985, BAP ‘alumni’ and ‘fellows’ have been brought together courtesy of Coca-Cola, Monsanto, Saatchi & Saatchi and Philip Morris, among other multinationals.”

Pilger went on to say that – “BAP conferences are held alternately in the US and Britain. This year it was in Newcastle, with the theme “Faith and Justice”. On the US board is Diana Negroponte, the wife of John Negroponte, Bush’s former national security chief notorious for his associations with death-squad politics in central America. He follows another leading neocon, Paul Wolfowitz, architect of the invasion of Iraq and discredited head of the World Bank.”

The British American Project, with its clear links to the American government, current links to global corporations, to finance, the nuclear industry, healthcare, government, strategic intelligence and politics uses its influence and persuasion, ethical or not, to shape the political environment of Britain. Is it a stretch to say BAP is distorting Britain’s democracy?

By the nature of the British American Project – it is obvious that Jeremy Corbyn and his vision of Britain’s is to be resisted at all costs.

And so it is that this story, the story of Corbyn’s antisemitism that sits with the same falsehoods we are all immersed in these days in Britain. They are the slogans of division. Taking back control was a lie. Leaving the EU would be the easiest thing in the world was a lie. The reasons for attacking Iraq and Libya were all founded on lies. Climate denial is a lie. Trickle-down economics is a lie. We are being immersed in a disgraceful environment of political propaganda, disinformation and downright lies cooked up by those with vested interests and promoted by the billionaire offshore owners of the press and fellow travellers such as Ruth Smeeth and contriving organisations such as BAP.

Little wonder that this very day, according to an alarming new study from the Hansard Society that more people in Britain would now favour a populist ‘strongman’ – an authoritarian to rule the country because faith in our democracy has now reached a new low never witnessed in Britain’s long history!

The face of our new toxic politics