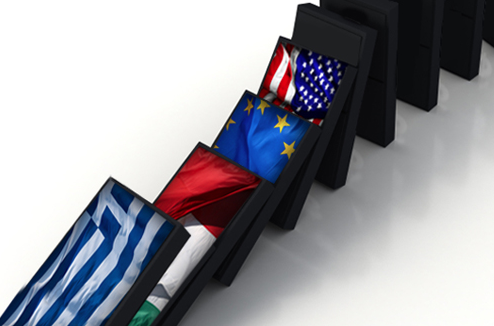 By Graham Vanbergen: Last November the mainstream media wrote headlines of impending doom in the Italian banking industry – it made good reading and they weren’t wrong. But now it’s actually arrived there’s something of a media ‘blackout’. The European Central Bank quietly released the information which, has largely gone unreported.

The decision by the ECB came about as a result of lack of capital. The Single Resolution Board (SRB) concluded that conditions for a resolution action were not fulfilled and that the two banks are to be wound up under Italian insolvency procedures.

The ECB press release said:
On 23 June, the European Central Bank (ECB) determined that Veneto Banca S.p.A. and Banca Popolare di Vicenza S.p.A. were failing or likely to fail as the two banks repeatedly breached supervisory capital requirements. The determination was made in accordance with Articles 18(1a) and 18(4a) of the Single Resolution Mechanism Regulation.
The ECB had given the banks time to present capital plans, but the banks had been unable to offer credible solutions going forward.
Consequently, the ECB deemed that both banks were failing or likely to fail and duly informed the Single Resolution Board (SRB), which concluded that the conditions for a resolution action in relation to the two banks had not been met. The banks will be wound up under Italian insolvency procedures.

The official reason for their insolvency was given as:
“ECB Banking Supervision has closely monitored the two banks since capital shortfalls were identified by the comprehensive assessment in 2014. Since then, the two banks have struggled to overcome high levels of non-performing loans and underlying challenges to their business models, which resulted in further deterioration of their financial position. In 2016, the Atlante fund invested approximately €3.5 billion in Veneto Banca and Banca Popolare di Vicenza. However, the financial position of the two banks deteriorated further in 2017. The ECB had therefore asked the banks to provide a capital plan to ensure compliance with capital requirements. Both banks presented business plans which were deemed not to be credible by the ECB.”
Rest assured, there will be more.

Here’s an excerpt from economic-research-bnpparibasregarding the coming Italian Banking crisis:

In comparison, according to the OECD, the ratios for Spain and France were 9% and 4.5%, respectively, in Q3 2016.
Moreover, Italian public finances are still among the most deteriorated in the eurozone. Gross public debt is at an all-time high and has shown no signs of declining yet. In 2016, it accounted for about 133% of GDP, compared to eurozone average of 89%.
Back to that in-depth economic-research paper that also warns of further financial storms ahead:
The problem of non-performing loans and their impact on profitability and solvency concerns the entire Italian banking
system. Of the five big Italian banks, only Intesa Sanpaolo reported profitability of more than 0.5% in 2016. Inversely, the results of Monte dei Paschi di 0% Siena (MPS), UniCredit and Unione di Banche Italiane -10% (UBI) have deteriorated significantly. In the light of these differentials, we can see that the banks have very unequal capacities to absorb the cost of any eventual write- offs or write-downs of their non-performing loan portfolios.