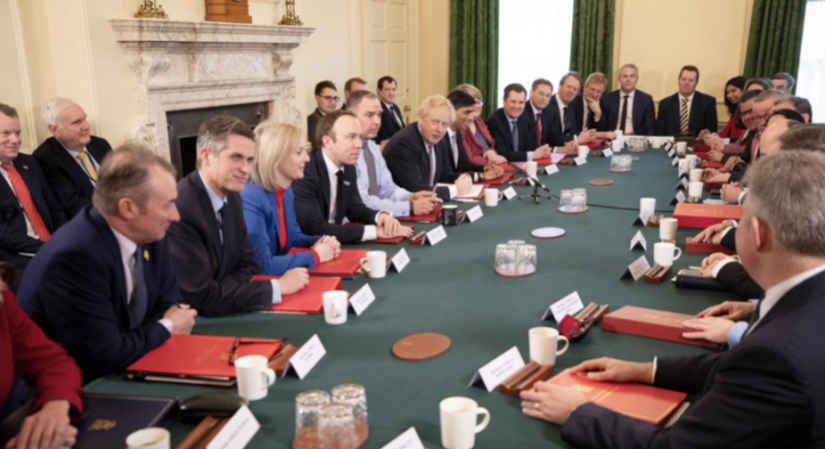 By TruePublica Editor: Leaving aside personal political allegiances for one moment, it should not be forgotten that without doubt, the cabinet run by Boris Johnson is the least experienced to lead the country, probably since the first Labour party win in 1924. It doesn’t help that Boris Johnson himself has no reputation for diplomacy, hard work, attention to detail or as we have recently witnessed – leadership.

Despite the Conservative Party being in power for 10 years now, it is often overlooked that the average member of the ministerial team leading the UK through its worst public health, economic and diplomatic crisis in nearly a century has just 19 months of Cabinet-level experience. Worse, fourteen out of the 22 have been in Cabinet for less than a year. Like him or not, the influential Whitehall fixer Michael Gove is a veteran of David Cameron’s first Cabinet a decade ago – the only one to have survived and the only one with proper ministerial experience.

The main reason for this lack of experience is Brexit and the huge swing away from moderate Conservative values to the political hard right. The Tory Party’s civil war over EU membership and the Brexit deal ended or derailed the political careers of a string of senior well-seasoned politicians who could have added so much value in times of crisis.

After the events of the last three months, it is easy to forget that Britain was suffering a housing crisis, rising homelessness and inequality, a health crisis and a fall in overall lifespan driven by austerity. Add to that the economic damage that Brexit was forecast to bring, estimated to bring another recession to match the last one. Now add a pandemic, the decoupling of globalisation, America’s rapid fall as the world’s referee and the vacuum that will create. Then add fuel to the fire with scenes of protestors and police forces attempting to keep the peace, looting and violence. And as the smoke clears, metaphorically speaking, in just eight weeks time, the economic damage caused by the lockdown is likely to see a quarter of carefully nurtured small and medium-sized businesses (by far the biggest employers in Britain) collapse over the following eight weeks. The likelihood is that a couple of million normally hard-working people will be added to the queues of the unemployed outside jobcentres by Christmas.

Could it get any worse?

Actually, yes. It turns out that Brexit will do substantially more harm to ‘global Britain’ than first anticipated – and No, this is not a Brexit bashing article per se, but it does highlight other worries hardly anyone is talking about.

Brexit is an ideology. It never was an economic policy written down on paper, debated over by experts and then with political will, moved into the public sphere for further debate and decision. This is why it will have taken nearly four years to achieve nothing more than a hard-Brexit at the cost of two Prime Ministers, the Conservative party itself, endemic social division and the anti-democratic crushing of institutions to keep it alive.

If anything Brexit is a pivot away from the moderate political centre-ground that provides the regulatory constraints to corporatism to one that is deregulated and firmly right-wing. This means taking one choice of two super-powers, towards the EU or towards America.

But now, with shifting geopolitical sands, Britain finds itself in a no-win situation. The UK’s special relationship with the US may end if Donald Trump wins a second term, some of the UK’s most senior retired diplomats and Conservative foreign policy specialists have said. They also say that if the Democrat Joe Biden wins, Washington may view the EU rather than the UK as its primary partner in the region. In other words – if ever there was a ‘special-relationship,’ it’s now over.

Donald Trump is now so politically toxic, that the EU and especially Germany have come to the conclusion that the USA is no longer an economic partner or a democratic ally.

Sir John Sawers, the former head of M16 and a former UK ambassador to the UN, also said Trump’s re-election would be problematic. He said:

“If he gets elected for a second time some of the changes we have seen in the past few years will become embedded and entrenched and then, absolutely Britain will not be so much a bridge between the US and Europe. We will need to be bounding closely together with our European partners.”

The consequence of pandering to the slogans and messages of Brexit is that it has ripped apart Britain’s good diplomatic relations with its neighbours and is threatening to damage its economy by pulling away in a very detrimental way that may cause long-lasting scars. It also sees Donald Trump putting America’s considerable political weight on British negotiators demanding a deal that will be extremely uncomfortable for the general public to accept. Negotiating a trade deal with the USA having ditched the EU is an absolute minefield.

The Guardian reports that – in a sign of British diplomats’ despair with Trump, Sir Peter Westmacott, a former ambassador to Washington, said: “I would love to say, as we look to the future, would it not be nice to see political leadership also addressing old-fashioned principles such as accountability, respect for the rule of law, independent judiciary, telling the truth, institutional independence and indeed the importance of a free press? That may not be what public opinion is crying out for, but they are not very far removed from the principles that Biden believes in. Otherwise, the chances of the western world retaining any sort of moral leadership and giving itself the right to call out other people when they behave badly will be gone forever.”

What Westcott says is true but it reflects badly on a British government run by novices and dependent on people like Dominic Cummings who have hugely over-estimated their abilities. The Covid crisis confirms that much. Boris Johnson’s government have relied heavily on a lack of ‘accountability, respect for the rule of law, an independent judiciary, telling the truth, institutional independence and indeed the importance of a free press. Indeed, that is THE very hallmark of Johnson’s government. So far, the only effective and visible skillsets demonstrated have been the weaponising of misinformation, disrespecting hundreds of years of political protocol, law-breaking and attempting to silence, coerce or co-opt the media.

The fact is – as America withdraws from its global primacy, from its version of dictating the world order, democratic nations need to get together and reset the rules – or someone else will. That someone is already on the podium in the guise of Xi Jinping – a man with huge experience on the world stage.

Right on cue – Joe Biden’s chief foreign policy adviser, Antony Blinken recently said – “If we are not (setting the global order), then one of two things happen. Either someone else is, and probably not in a way that advances our interest and values, or no one is, and that can be even worse. Then you have a vacuum which tends to be filled by malevolent things before good things. So the US has a responsibility and self-interest in leading with humility.”

As it turns out – UK diplomats are not just seeing this threat they are actively moving towards looking to form a broader alternative alliance of democracies that dilutes dependence on the US. And as one diplomat says – “If we get another four years of (Trump’s) leadership, then some of the bonds and some of the cement that holds the west together, and holds Europe and America together will be broken forever.”

However, if Biden is elected US president in November, America will focus on the European Union as its partner, leaving a small island off Europe’s coast to fend for itself. This is what British diplomats now fear – a no-win geopolitical situation that further isolates Britain from the global stage. Any notion that Brexit, no-deal with the EU and a pivot towards Trump’s America, will deliver sunny uplands and a renewed global confidence are now nothing more than the thoughts of fantasists and novices currently sat in No10 Downing Street.

As of May 28th, 45 per cent of the British public think it was wrong to leave the EU against 42 per cent who think it right. At the very least, 56 per cent now support a Brexit extension due to the damage the pandemic has caused against 27 per cent who think Brexit should happen as legislated for.

Public opinion has moved – and it is in favour of staying within the influence of the EU. In a few months time, you will see that sentiment swing further towards the EU as Trump’s America continues to embarrass the democratic West, especially if he is elected again and more so as a US/UK trade deal exposes the reality of an ideology designed to exploit people and resources, not reward or repair.