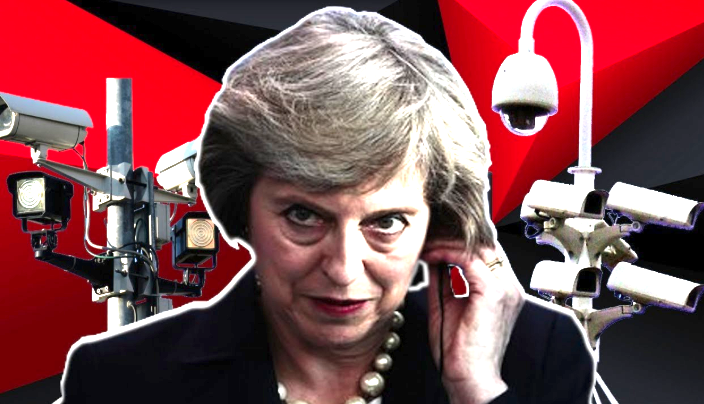 By TruePublica: Theresa May started the Tory party conference speech last week talking about decency and civility within politics, asking her delegates to rise above the abuse and made a case for Conservative values. One wonders what those values might be given the news that the mass surveillance architecture that Theresa May herself proliferated in her tenure as Home Secretary breaks the law and breached the European Convention on Human Rights. British appeal court judges ruled last January that the government’s mass digital surveillance regime was unlawful. It didn’t stop the government then, nor will this latest judgment.

The government takes images of millions through their devices (about 15% are compromising personal images), records their conversations, stores emails, contacts, family, friends, salary, expenditure, sexual and political orientation and have been called out by the United Nations, the highest courts in Britain and those in the EU. The police, government agencies and private contractors can surf the privacy of political dissidents, non-conformists and protestors. Just last week, a judge jailed non-violent fracking protestors (for 16 months) for attempting to protect their community – the first time a British government has done so since 1932. Social media giant FB was found to have tracked these protestors and handed over the data for a fee.

The war against the people has gone full cyber and we should not forget that it was Theresa May and her government that has extended its reach with impunity into your homes, relationships and most private moments and allowed the tech giants to profit from it along the way.

From OpenRightsGroup is the press release that the mainstream media completely ignored over the last two weeks.

The Court found that the UK’s mass surveillance programmes, revealed by NSA whistleblower Edward Snowden, did ‘not meet the “quality of law” requirement’ and were  ‘incapable of keeping the “interference” to what is “necessary in a democratic society”’.

Documents provided by Mr Snowden revealed that the UK intelligence agency GCHQ were conducting “population-scale” interception, capturing the communications of millions of innocent people. The mass spying programmes included TEMPORA, a bulk data store of all internet traffic; KARMA POLICE, a catalogue including “a web browsing profile for every visible user on the internet”; and BLACK HOLE, a repository of over 1 trillion events including internet histories, email and instant messenger records, search engine queries and social media activity.

The applicants argued that the mass interception programmes infringed UK citizens’ rights to privacy protected by Article 8 of the European Convention on Human Rights as the “population-level” surveillance was effectively indiscriminate, without basic safeguards and oversight, and lacked a sufficient legal basis in the Regulation of Investigatory Powers Act (RIPA).

In its judgment, the ECtHR acknowledged that ‘bulk interception is by definition untargeted’[2]; that there was a ‘lack of oversight of the entire selection process’,[3] and that safeguards were not ‘sufficiently robust to provide adequate guarantees against abuse’.[4]

In particular, the Court noted ‘concern that the intelligence services can search and examine “related communications data” apparently without restriction’ – data that identifies senders and recipients of communications, their location, email headers, web browsing information, IP addresses, and more. The Court expressed concern that such unrestricted snooping ‘could be capable of painting an intimate picture of a person through the mapping of social networks, location tracking, Internet browsing tracking, mapping of communication patterns, and insight into who a person interacted with’.

The Court acknowledged the importance of applying safeguards to a surveillance regime, stating:

‘In view of the risk that a system of secret surveillance set up to protect national security may undermine or even destroy democracy under the cloak of defending it, the Court must be satisfied that there are adequate and effective guarantees against abuse.’

However, today’s judgment that indiscriminate spying breaches rights protected by the ECHR is likely to provoke serious questions as to the lawfulness of bulk powers in the IPA.