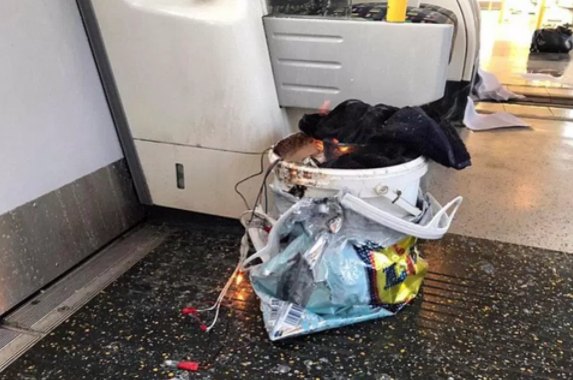 By Craig Murray: Everyone has seen the photo of the plastic bucket in the Lidl bag which contained the Parson’s Green bomb. The typically dubious Islamic State clam of responsibility conjured amusing images of ISIS shopping at Lidl. The event was no joke however for the few people who were burnt, and the lesson yet again is that even the most amateur “terrorist” can kill or maim if they put their mind to it. Which is one reason why we should always be entirely sceptical of security service claims to be monitoring thousands of terrorists and foiling dozens of plots. Terrorism is physically easy – anyone who can wield a knife, drive a vehicle or put flammable liquid in a bucket can do it. Many entirely amateur terrorists manage to be a lot more deadly than these ones. In practice you cannot physically prevent all crime from occurring, without changing society completely by the most fundamental abolition of civil liberties. A certain low level “terrorist” risk we just have to live with. If we shun attacking other countries, we will obviously reduce that risk.

To create an effective blast, you need some sort of pressure vessel containing the explosive. There is no sign of this in the photos of the Parsons Green bomb and plainly there was no “blast” as such from the condition of the bucket. Some kind of fire event was rather created. If the police are arresting the right people, it is teenagers from social care backgrounds who did this. That is of a piece with what we know of so many recent attacks, where psychiatric health appears to be the cause of an interest in nihilist ideologies – as opposed to the other way round.

We are entering a phase where we can expect the deep unpopularity of the government to worsen. Real wages continue to fall, and that is going to continue. Despite this and the massive mountain of personal debt, the Bank of England seems determined to raise interest rates in the next few months, which will put an even larger squeeze on the living standards of the poor. In particular, an increase in interest rates will not just cause the struggling and overly indebted to have higher repayments, in the Tory buy to let economy it will feed directly into higher rents.

The government therefore needs an alternative narrative to distract the bulk of the population from their increasing penury. The Tory government will continue to use the Brexit negotiations, not to obtain the best outcome for the UK, but in order to manipulate events to highlight the issue of immigration and seek to further scapegoat immigrants as the cause of popular economic hardship. But they will also undoubtedly try to play up the “security” narrative. Expect more legislation to restrict civil liberties, and particularly expect amber Rudd to spearhead a coordinated media campaign to promote major censorship of the internet. That is the next major fight where we will have to stand up to the Tories.