Local Elections : MSM Nonsense – and the real message for politicians 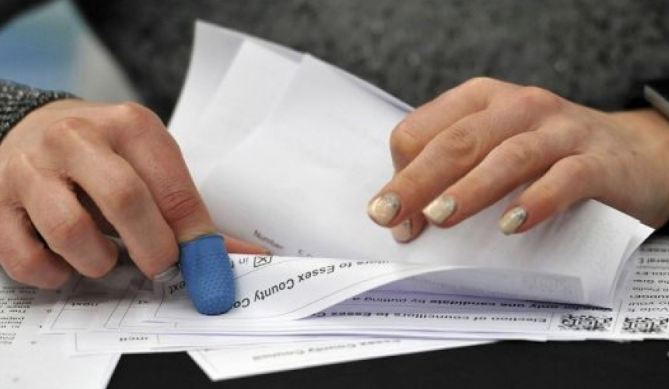 By TruePublica Editor: Who won, who lost, was it Remain, Leave, blah, blah.  Let’s not beat about the bush here and say what this really means and not the garbage that the mainstream media would have you believe.

Change UK changed nothing at all and the electorate ignored them.

The Tories were hammered. Let’s not forget that in the 23 months since the last general election 47 ministers have resigned or been sacked from Theresa May’s government. That’s just about two a month.

Labour, against a backdrop of rising hatred to everything that the Tories stand for – and for not taking the stand of their own party members on Brexit, were embarrassingly given a public beating by their own. Any party looking to gain power would need to make solid gains. The did the opposite.

The Lib Dems and Greens did really well as a protest vote, but don’t have what it takes to gain enough to lead anything.

The Independents that stood were the biggest winners but will translate into nothing at all at a general election.

The Tory state media has attempted to portray the results as a crisis for Labour but haven’t actually worked out why. It is, but nothing compared to the drubbing the Tories themselves got. The last time something like this happened, they were thrown out of power for well over a decade and even then had to form a coalition to get back into No 10. Their performance since has been a national disaster.

As for Labour, the political editor of TalkRadio quite rightly points out that – “Jeremy Corbyn is set to have lost more than 400 Labour councillors in four years. That may make him the worst performing leader of the opposition at local elections for 40 years.” Anyone who thinks Labour didn’t so do bad – wake up. 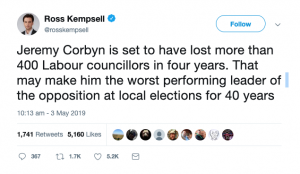 So what we can surmise from all that if interpreted into a general election?  Not much. If anything, just that voters were once again faced with the least worst of utterly awful. Theresa May and Jeremy Corbyn do not have what it takes to be future leaders of Britain.

Whilst I have said since well before Theresa May lost her majority in a snap election and shoe-horned herself in by aligning with thugs from Northern Ireland, that she would be a dictator listening to no-one – I have also said that Jeremy Corbyn would do anything to seize power, irrespective of the consequences to the nation and not listen to the party membership. Sadly, I was right on both occasions.

Labour, who stand the best chance of being elected in a future general election, will take these results as some sort of mandate for a Brexit deal – a deal they can’t be seen to be agreeing in negotiations with the Tories and couldn’t solve even if they were in power. They are ignoring loyal Remainers in their party and taking them completely for granted whilst hunting down some disaffected Leave voters from the Tories. That’s it. Bugger the nation. Literally.

Labour should take notice of the fact that their own support in poll after poll does not give them a commanding lead and the local elections do not confirm anything else.

As for Brexit – the local elections mean nothing. Both Tory and Labour have confirmed that their awful results mean only that Brexit must be done – or not. But not something in no-mans-land as it is.

But how about taking another view of all of this political instability.

Brexit – was an unexpected result. Theresa May’s snap election was unexpected. Politicians on both sides of the house agreed to trigger Article 50 without knowing the first thing of its consequences. Strong and stable is dead. Taking back control is dead. All the slogans from the left/right, remain/leave are dead.

Is something else not emerging? That of rising national dissent.

Are the people not looking at the events that have disturbingly ‘taken control’ of their lives, stolen their ‘stability’ in the few short years of this century.

It started with Iraq – an international disaster we have all had to endure. The attack of Libya and Syria then added to the collapse of those nations and caused a mass migration movement that destabilised the European Union that was seized upon by a MSM hellbent on spewing out guttural racist claptrap – also known as propaganda.

Inequality, homelessness, working families and child poverty, the crisis of everything – from the health service to military service – it’s all a shambles. We’ve had to endure cover-ups from paedophiles at the highest in public life to illegal wars and more. The state is spying, hacking and tracking all of us. Bankers bonuses on the one hand and austerity-driven nutritional famine on the other. From bad credit to universal credit.

The social contract between nation and state has been broken. Trust between them has all but vanished as it has with the very institutions originally designed to protect us from this anarchy by the rich and powerful.

Even the political correspondent of Sky News agrees. “The conduct of the prime minister and her ministers imperil (parliament) its  long-term vitality, undermine its authority and threaten to unstitch the seams between people and parliament.”

Have we not had enough of the political class that has discarded social justice. Human rights – fought for by our predecessors will soon become maybe’s. Looking at the arrest of recent non-violent protestors around the climate crisis, fracking or Assange for instance – clearly demonstrates that our civil liberty is being dismantled right before our eyes. Look at the banker’s non-stop crimes without punishment and then the arrests and imprisonment of starving beggars on high streets and the whole concept of equality before the law becomes nothing more than a political sound-bite to protect those above it.

What does all this mean? It means to everyone else that British politics is not fit for purpose. The state cannot work out what it is or what it stands for. It knows it wants to protect before all things its power, influence and wealth and other than the latter, it can’t even achieve its most self-important goals any more.

This political class have not bothered to attempt to protect this nation from the malicious threats of the 21st century such as unchecked corporate power and its insidious lobbying. They’ve allowed our own surveillance agency to do as they please, allowed foreign threats from unaccountable agencies including America’s NSA, Israel, China, Russia and so on. It has failed to concentrate on hackers, to protect our fundamental right to privacy and doing the opposite by forcing upon us all secret national ID cards via biometrics, illegal facial recognition systems and the like. It has failed to protect us from terrorism and even encouraged it with the rise of the far-right, now a bigger threat than extremists who traditionally will stop at nothing to kill us and our way of life for their own warped ideologies.

Extinction Rebellion has taught us something. Take action before this political class – the establishment, completely destroys what is left of Great Britain.

The rise of the Independents at the local elections – a great result for a bunch of totally unconnected individuals with no party backing or anything like the funding of their competitors says a lot – something the ever-shrinking mainstream media have again rejected as a consideration.

The group now called ‘None-Of-The-Above’ is a clear sign that the political ecosystem that has been utterly abused by all those walking the corridors of power is now at risk of imminent implosion.

What we have left is that neither main party seems able to cobble something remotely like a deal acceptable enough for either them or the electorate when it comes to something like Brexit. You cannot imagine the dire consequences if this lot were facing the challenges of 1939.

About 30 per cent of party loyalty on either side is embedded – and that is not as big as you imagine. They would vote for their tribe irrespective of the consequences – but that leaves a significant force in the middle who have just pushed their heads up above the parapet. Neither Tory nor Labour have listened or taken heed. The EU elections are next (assuming May doesn’t desperately do some sort of deal with Corbyn to avoid them) – and a new message will emerge.

By the time we get to the next general election, the circumstances are there that there will be no viable government as more and more Independent’s stand and the undecided/hacked off/none-of-the-above look for a new political home. By then, Britain will be in a critical state and at that moment the crisis could turn into a catastrophe.

The Tories will disintegrate, Labour could well split. The fuse for a populist leader is set alight. Farage is a good demonstration of that. Worse, from Blair to May – these corrupt administrations gave themselves new unprecedented powers that should never be given to authoritarians.

These local elections tell us that there is no electoral consensus either way. Britain’s leadership has collapsed. The ‘establishment’ is no longer leading, defending or managing in the national interest and the people know it. Our best hope is that an insurgent centre ground political force rises up. It isn’t Chukka & Co that’s for sure. Other than that – Britain is in big, big trouble.