Mainstream Media Lies: The Latest on Equador and Julian Assange 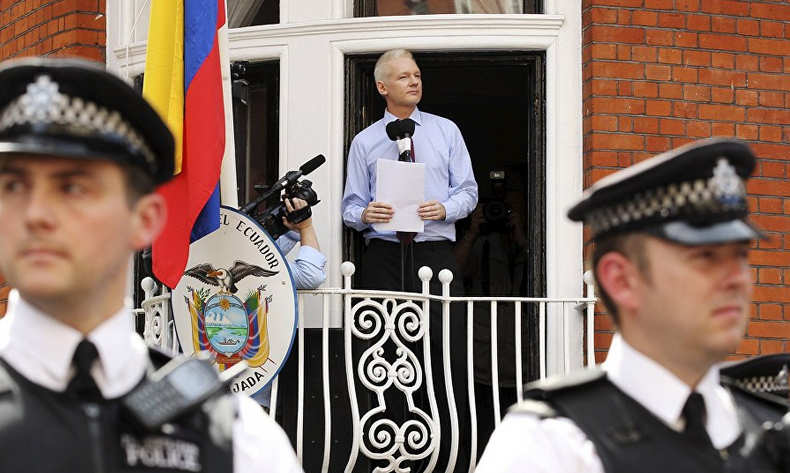 The Foreign and Commonwealth Office appears to be putting out a story that it has refused to accredit Assange as an Ecuadorian diplomat. As the Guardian reports:

“Earlier this week the UK’s Foreign Office revealed that Ecuador had asked for Assange, who was born in Australia, to be accredited as a diplomat. The request was dismissed.”

I have no knowledge that the Ecuadorian government ever notified Assange as a member of diplomatic staff of its mission. But it has every right to appoint Assange, now an Ecuadorian citizen, as an Ecuadorian diplomat if it so chooses. Ecuador cannot tell the UK who may or may not be a British diplomat, and the converse applies.

The Vienna Convention on Diplomatic Relations – to which the UK and Ecuador are both party – is the governing international law and determines the obligations to respect diplomatic immunity. It is crystal clear (Article 4,1) that the need to obtain agreement in advance of the receiving state only applies to the Head of Mission – ie the Ecuadorian Ambassador. For other staff of the mission the sending state (in this case, Ecuador) “may freely appoint” the other members of the mission, (Article 7), subject to provisos in Articles 5,8,9 and 11. Plainly the only one of these which applies in the Assange case is Article 9. Julian Assange is persona non grata – unwelcome -to the UK government. That is a legitimate reply to notification, but comes following the appointment; it does not pre-empt the appointment.

Here is the key point. A member of staff below head of mission can already have entered the country before appointment, and their diplomatic immunity starts from the moment their appointment is notified, and NOT from the moment it is accepted. Article 39 (i) could not be plainer:

1.Every person entitled to privileges and immunities shall enjoy them from the moment he enters
the territory of the receiving State on proceeding to take up his post or, if already in its territory, from
the moment when his appointment is notified to the Ministry for Foreign Affairs or such other ministry
as may be agreed.

There is no requirement for prior approval before arrival of staff below Ambassador, and it is just a notification regime (Article 10). If the FCO is telling the truth and Ecuador notified the UK of its appointment of Julian Assange as a member of diplomatic staff, the UK can only have refused by declaring Assange persona non grata. That does not remove his diplomatic immunity which started the moment he was notified. It continues until he has been given the chance to leave the country in “a reasonable time”. (Article 9.2, and 39.2).

The immunity of envoys has been universally regarded as essential to inter-state relations for thousands of years. The reasons why that immunity must start at notification are obvious if you think it through. The FCO bragging about refusing the alleged Ecuadorian request has been carried in virtually the entire neo-liberal media.

Not one article, anywhere, has reflected anything approaching the applicable legal arguments. I am again left wondering whether mainstream media journalists are simply entirely incompetent, or deeply corrupt.