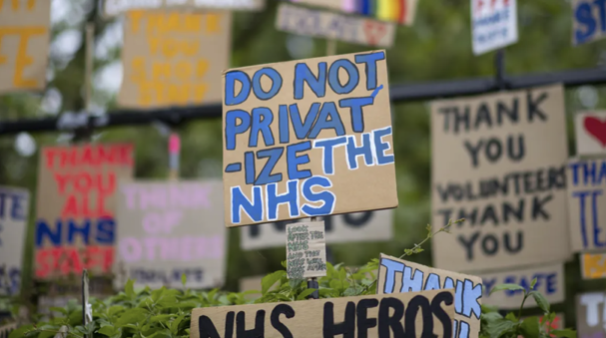 TruePublica Editor: Today, we have a Prime Minister who prorogues Parliament, sits on the Russia Report for months and rejects its most important points, accepts an implausible excuse from an advisor who cratered the resolve of the country to beat a pandemic, tries to flout a treaty by breaking international law and now becomes the first PM in Britain’s history not to force an MP to resign for breaching the Ministerial Code. Immersed in accusations of negligence and corruption, Britain has one of the worst Covid death rates in the world and the worst recession of any major economy. Now he plans a massive radical shake-up of the NHS – what could possibly go wrong?

If you ever needed a rather neat summary of this government’s character, it is explained no better than this: A Secretary of State, responsible for enforcing the rules that govern us as a country, broke the rules. She kept her job. The person she bullied AND the person who found she broke the rules have lost their jobs.

One of Patel’s victims even tried to end her life. The woman took an overdose of prescription medicine in her office and had to be taken home by her partner where she attempted to kill herself. For that, compensation was paid. Patel didn’t pay anything but the taxpayer footed the bill.

In any other walk of life, Priti Patel would have been summarily dismissed. And if Boris Johnson was the CEO of a large trading corporation – he would be told by the executive board to step down or be fired for supporting an act that clearly contravenes legislation that protects employees in the workplace.

As an example of modern-day morality – it was only two weeks ago that Football Association chairman Greg Clarke resigned over the “unacceptable” language he used when referring to black players. Clarke said he was “deeply saddened” for the offence he had caused by using the term “coloured footballers”. There were no ifs, no buts – he accepted his error and walked. Compare that to our PM who is a deeply racist, misogynistic, lying PM who would say anything if it personally benefitted him.

My dislike of Johnson and this cabinet rabble is deepened further when we learn of the underhand techniques they use to further their agenda as typical of the above examples. We’ve all heard about and started to normalise shocking stories about Cambridge Analytica, Facebook, Vote Leave and so on. We started to get used to non-stop scandals surrounding government incompetence in preparing for Brexit or Tory donors being immersed in taxpayers cash for contracts they don’t deliver on.

Boris Johnson’s fake optimism isn’t working any more. He’s now being mugged by the reality of his own lies. Brexit is a class example. Its reality is so bad that support for it has plummeted to such an extent that the only thing the public expects is to brace themselves from its negative effects.

And now, the NHS is about to suffer yet another top-down structural change – because the last one – carried out by the Tories in 2012, which the BMJ reported was – “arguably the largest change since 1948” has failed in its objectives. More recently, Boris Johnson promised 40 new hospitals and 50,000 new nurses. Less than a year later – those lies have turned into something completely different.

In 2002, Tony Blair instigated the creation of foundation trust hospitals in England, which sparked a big row with his party at the time. The plan was to liberate the best hospitals from central government control and encourage them to compete with each other to provide better care. There are 217 NHS trusts in England, of which 150 are foundation trusts. In 2012 the Tories pushed on with the Social Care Act and a privatisation drive. This time, they want complete control. Johson’s administration has fired the boss of Public Health England, the body the Tories themselves set up and is now disbanding it.

The latest announcement from Johnson’s government has for the first time confirmed the existence of a prime ministerial task force which is reportedly planning a “radical shake-up of the NHS”. Given that this government is now becoming legendary for its incompetence, followed closely by cronyism and nepotism – NHS bosses must be truly terrified about what is in store for them. You would think a ‘task-force’ might work but the Scottish independence, the government have just set up their fourth one in 15 months. The three previous ones all failed to achieve anything. The last one was headed up by Michael Gove.

The person planning this latest institution slaying project has no experience in the healthcare industry at all – and by that, I mean none whatsoever. It smacks of the Dido Harding scandal – the failed businesswoman given the privatised test and trace contract that overwhelmingly failed at an eye-watering cost to the taxpayer. The new “No.10 Health and Social Care Taskforce” reports to a Steering Group chaired by Munira Mirza. And because Mirza, a political appointee who previously worked for Johnson when he was London mayor, has no background or policy experience in health – you know that this ‘task force’ has failure built into it. You also know that corruption will also be built into it – just as Covid was not seen as a public health crisis by many Tory MP’s but a business opportunity.

Undercover of the twin crises of the pandemic and Brexit – both of which have dramatic effects upon the economy, standards of living and public health, the NHS is to be ‘restructured’ towards an insurance backed privatised model. And even if everyone agreed that this should be done – now is not the time. Any blithering, swivel-eyed looney could see that – except perhaps old ‘failing Grayling.’

GP’s see well over 300 million appointments in a typical year. In total, the NHS dishes out 17 prescriptions for every man, woman and child in the country each year and carries out 5 million surgical procedures, 1.2 million of them connected to trauma. To do this, the NHS employs 1.5 million people and is the biggest single employer in Britain. The NHS is not perfect but it is very good value for money. According to the World Health Organization, the country with the best health system overall in the world in 2000 was France, with the UK ranked 18th out of 190. In 2009, according to the EuroHealth Consumer Index, France was ranked seventh out of 33 (mainly European countries) and the Netherlands first (UK trailed in at 14th). Meanwhile, last year’s regular 11 country survey of health system performance from the Commonwealth Fund in New York suggested that the UK ranked first. It all depends on how you measure it.

One thing is for sure though. Less than 5 per cent of Britain’s population thinks the NHS needs completely rebuilding and 60 per cent thinks it needs only minor changes to make it better (source). Just because Boris Johnson was elected PM – it doesn’t give him the mandate to go ahead and destroy yet another institution that Britain does well and so highly values.