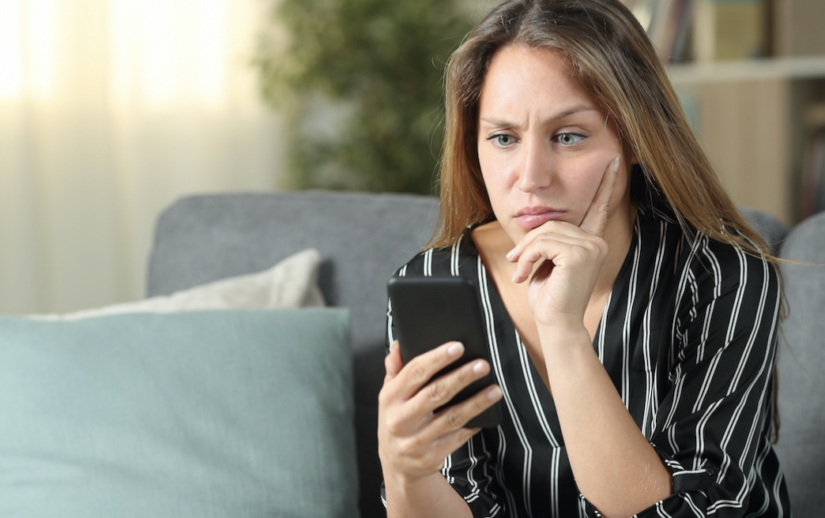 By Caroline Molloy: Patients trying to book NHS GP services online are plunged into a ‘baffling’ system of paid-for tests and ‘backdoor privatisation’

More than once, Rachel found herself waiting up to three-quarters of an hour to get through to book an appointment with her south-east London GP – just at the time she has a school run to do. “You call at 8 – at 8.28, you think, we have to go to school in two minutes, do I hang up now?”

So Rachel followed the advice on the recorded message on the phone line and turned to her surgery’s website. It encouraged her to “Book your appointment online 24/7 with Patient Access.”

But when she clicked on the booking button on the Patient Access website, the site informed her: “Sorry, your practice does not offer this service.”

Instead, underneath, it offered her a long list of private, paid tests and procedures “outside your GP practice”.

Rachel’s experience is far from unique. Patient Access is one of the biggest providers of patient-facing GP services, at a time when digital delivery has been massively increased due to COVID. openDemocracy has seen complaints from a number of users and spoken to several who’ve all told a similar story of alarm at landing in a marketplace of private tests, when all they were trying to do – often fruitlessly – was book a GP appointment. 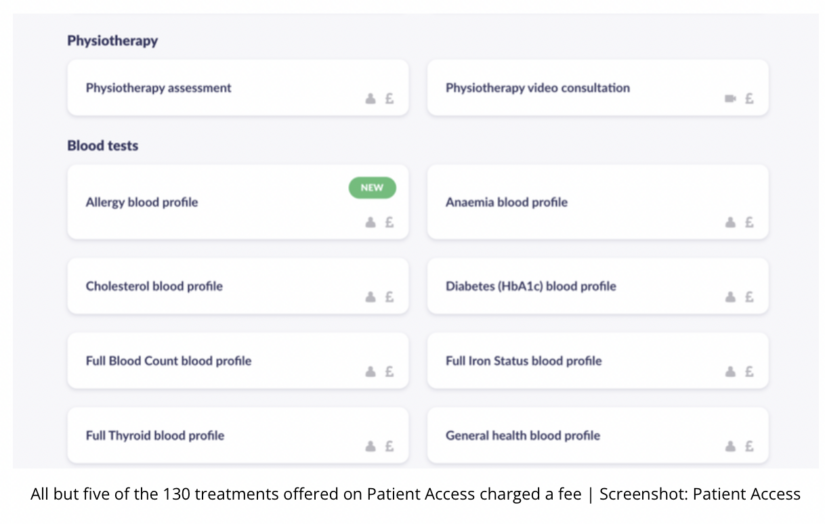 All but five of the 130 treatments offered charged a fee. Thyroid tests, for example, cost upwards of £80 in Rachel’s area. According to Rachel, it’s “backdoor privatisation”.

The site tells users to “please be aware that the following services are not provided by your GP practice and include treatments that you’ll need to pay for as they are delivered on a private basis”.

Patient Access is a product of the Leeds-based health IT giant EMIS, one of the three biggest firms providing digital back-office services to GPs.

At the start of the pandemic, EMIS was one of 11 firms selected to supply remote GP access including video and online patient assessment services, after a tender process that lasted just 48 hours. In 2020 its profits increased sharply to £36m.

Phil Booth, co-ordinator of MedConfidential, raised potential privacy concerns. “How is a patient to know the legitimacy of the test or other thing they are buying and who is delivering it? If you’re encouraging people, the worried well, to self-diagnose or seek further testing, and that involves them handing over a whole bunch of data to companies unknown, this is not the safe, trustworthy relationship that you would expect to have with your GP, and will damage trust.”

A spokesperson for EMIS said: “If a third party were to misuse an individual’s data then broadly speaking that would be a matter between those two parties – the same as if they had approached the healthcare provider directly, or found them through an internet search etc.”

The spokesperson added: “It would really depend on the facts of the matter… depending on the circumstances we might take action ourselves directly… we have agreements with the healthcare providers that include a number of obligations on them regarding acting in an appropriate and compliant manner.”

Another patient, Pam, herself a retired GP from Sunderland, thought the website’s caveat that users would have to pay for the services offered was easy to miss.

Pam was directed to Patient Access when she wanted to book an appointment, with her GP surgery website stating that it is “quicker and easier for you to make your own appointments via online booking”.

She said: “Physiotherapy seemed to be offered, but when I clicked on appointments for physiotherapy I was dismayed to find that there was a charge. I went back to the [Patient Access] website to find that there is a heading which says: ‘Services outside your GP Practice’, which I had not noticed at first, in my eagerness to book.

“There is no direct access booking available for NHS physiotherapy, which there used to be.”

Patient Access also offers an online “counselling assessment – severe mental illness and personality disorder”. Clicking on the link takes you to an information page with a prominent link to a form to fill in your card details and pay £160 to obtain an initial session with an unnamed “private therapy provider”.

The information page has a list of exclusions of people the service is not suitable for. It states at the bottom: “Some talking therapy services are available on the NHS. However, depending on your circumstances, you may not be eligible for therapy and if you are, waiting times can be extremely long.” 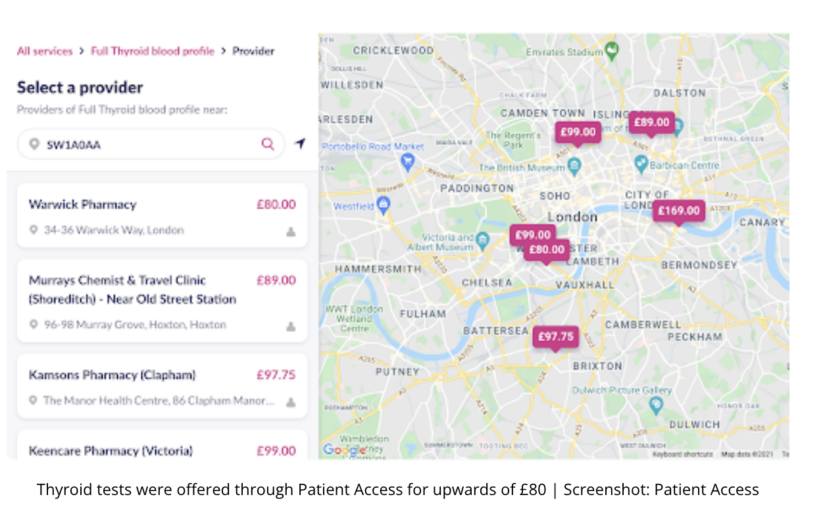 Other services on offer include Harley Street appointments for those with hearing loss and cervical cancer vaccinations to some age groups for a fee of £140. In both cases, the site states at the end of the information pages that the service may be available to some through the NHS.

A spokesperson for EMIS told openDemocracy, “All non-NHS services undergo robust clinical review before being approved to be included in Patient Access and each individual that wishes to access a service undergoes a robust clinical designed screening process to ensure any service is appropriate for them, including signposting where the service could be accessed from the NHS if appropriate.”

‘It should not be happening’

Pam was “shocked and appalled” at the extensive list of private services this website was promoting – which appears to be exactly the same list as Rachel was directed to – and complained to her local Clinical Commissioning Group.

She told openDemocracy: “I was assured it should not be happening – clearly it still is.”

She also thought there was “no information given about how to access these services on the NHS – presumably via a GP telephone appointment and a long wait!”

The small print on some pages seen by openDemocracy does state that “your GP may arrange” such a test.

But patients are ending up on this site because they’ve been unable to find another way of accessing a GP appointment.

‘It makes no sense at all’

The appointment booking service had been turned off on her NHS App, and the online form offered by the doctors’ surgery seemed designed for complaints, not bookings.

Rachel – a technology researcher and adviser on health innovation – said she found the system “baffling” and “extraordinary”.

“Who knows what you do then? It makes no sense at all,” she told openDemocracy. “I’m a relatively literate person, but the thing I would worry about, particularly for people who are ill and under pressure, is that they would end up inadvertently paying for things they probably don’t need because they’re not able to work out how to talk to the GP.”

A spokesperson for EMIS told openDemocracy: “GP practices enable online appointment booking for any NHS-approved ‘Patient Facing Services’ solutions. Patient Access is one of these solutions, alongside the recently released NHS App. Virtually all GP practices in England offer this functionality to their patients.”

Ben, who lives in Leeds, had a very similar experience to Rachel.

His GP’s website states “Connect to your GP’s services online and save time. Quick, easy and secure.” The next page directs you to a guide “which explains how to sign up for Patient Access for the first time”.

When he logged in to the site recently, like Rachel, he found a prominent button to book a “new appointment”. 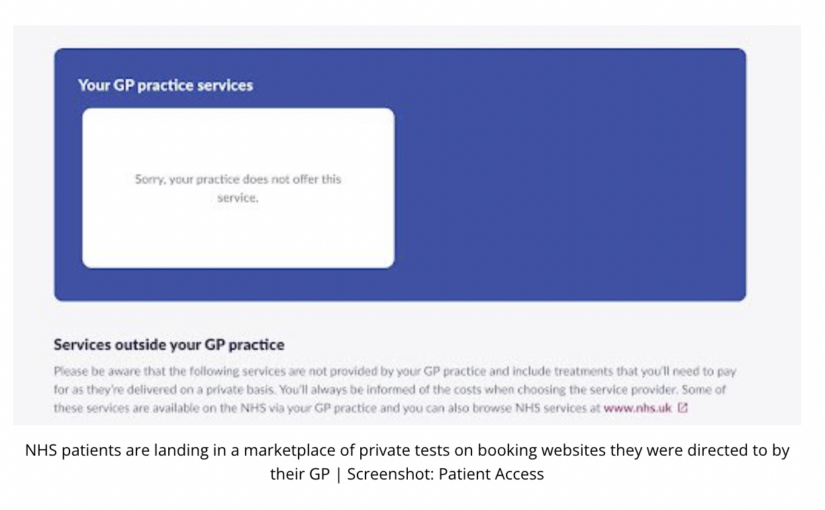 Yet clicking on it took him to a message saying “Sorry, your practice does not currently have any appointment slots that can be booked online.”

Underneath he was offered the same extensive list of private tests and treatments – a list that was “quite scary”, he told openDemocracy.

Like Rachel, the one thing he couldn’t do online was book any kind of appointment to see his GP, either through Patient Access, or via his surgery’s website. Pam was able to book a telephone appointment, but not a face-to-face one, through the Patient Access site.

‘I find that abhorrent’

GP and broadcaster Margaret McCartney said that while people may think they’re helping the NHS by paying privately for tests, the opposite is often the case.

“What often happens is that people are told to go back to their GP, with one or two mildly out-of-range results – which are inevitable – to have them repeated, or interpreted, or advised on,” she said.

“Effectively, the NHS [is] picking up after the private sector have profited. I am aware of a couple of companies who are trying to avoid doing this, but many, many don’t, and I find that abhorrent.”

All the patients openDemocracy spoke to were keen to stress that they didn’t blame their GP surgery but thought it was a systemic problem. GP morale and relationships with the government are low: GPs are considering industrial action after the government joined in media criticism of GPs’ reliance on online services. The attack raised the doctors’ hackles as government policy has pushed them to adopt online services in the years leading up to, and during, the pandemic.

A spokesperson for EMIS told openDemocracy: “Patient Access is now a leading app with 13 million registered users. Patient Access is a free service and is a ‘digital front door’ to allow patients to access both NHS and non-NHS health services that are already available, and can be made much more convenient to book by using an app.

The company’s spokesperson added that their service provided patients with “greater choice and convenience”.

The spokesperson confirmed they charged a fee to providers to appear in its marketing.

openDemocracy also contacted NHS England and the Department of Health for asking them what safeguards they had put in place around the marketing of tests and private treatments to patients and what benefit there was to directing NHS patients towards this marketplace, but did not receive a response.

Caroline Molloy is editor of openDemocracy UK and OurNHS, a journalist and speaker