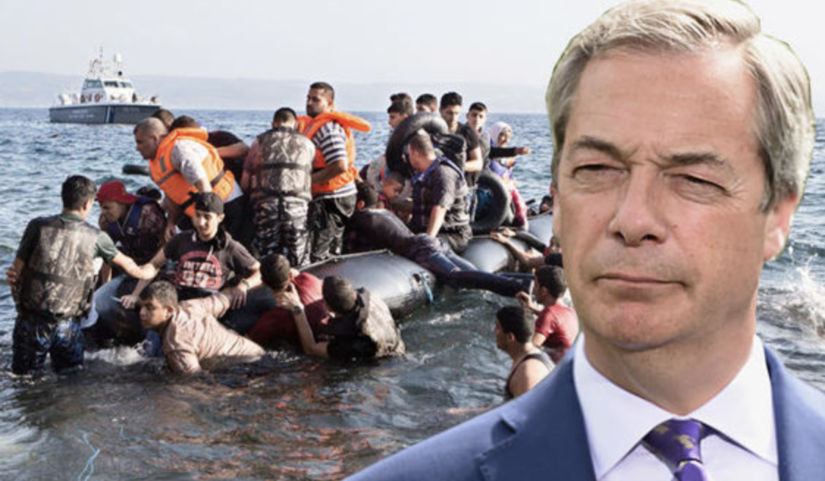 In a world awash in conspiracy theories, simplistic stories that have a single, clear message are quickly taking over just as traditional (real) journalists struggle to keep pace and get the right balance in their investigations, conspiracy theorists who pitch simple “us vs. them” scenarios are getting more airtime.

One example noted in this article from The Atlantic is the story “reported” by Brexit party leader Nigel Farage – that the French navy was escorting migrants to English shores so that France did not have to deal with them. Without adding any context and asserting that the mainstream media wouldn’t cover it, Farage’s story made for a compelling message — that Britain was under attack. And it doesn’t matter that there was no context, no nuance, and no evidence — stories like these “are not designed to lead to an outcome,” writes Helen Lewis. “They exist to seed the internet with culture-war talking points.”

It should be noted that Nigel Farage is something of an expert at inciting ‘culture wars’ and whilst it may well be something of a coincidence – four years ago, Jo Cox was murdered by a neo-Nazi shouting “Britain First” – when earlier that day, Nigel Farage unveiled a poster inspired by Nazi propaganda designed to stir up hatred of immigrants. It should have finished Farage’s “career” in a world dominated by common sense and level headed politicians. Instead, he was given his own show on LBC. He’s just been sacked from it for reasons we can all guess.

In Farage’s latest fake news conspiracy geared pot-stirring – Farage says he has uncovered a huge scandal – that is of migrant boats travelling from France to England, escorted into British waters by the French navy. He is apparently worried for those on board.

Once in Britain, he says, they risk becoming “modern-day slave labour.” Gesturing offscreen, Farage adds: “You might as well have a big sign on the White Cliffs of Dover, over there, that says ‘Anyone that comes to Britain illegally can stay … We are being taken for a ride by everybody, including the French navy.”

The American magazine The Atlantic Monthly, founded in 1857, originally published leading writers’ commentary on the abolition of slavery, education, and other major issues in contemporary political affairs. Last week it published a withering exposé about Farage and his antics.

“If you want to understand the conspiracist turn in modern politics, then Farage’s video series, shot during the pandemic, is a good place to start. His reports on migrant boats coming to Britain are filed on his YouTube channel under “Investigations” and are designed to look like traditional investigative journalism. They even adopt the tropes of British television-news reporting—the sad, falling intonation; the piece to camera; the languorous establishing shots of the sea.”

Farage is lying, making up fake news to fit his rancid divisive narrative and to further his own agenda.

Farage’s videos tell a simple story, with a victim—Britain, which is “being taken for a ride”—and a villain: not the migrants themselves, which might trigger accusations of racism, but France – in other words, the dreaded European Union.

Farage sets up the video as if he’s some sort of war-reporter – “You do get the feeling this is a story that isn’t to be told. Well, you know what—today, we’re going to tell it.”

It wasn’t that strange that it was a story untold by the media – be it mainstream or independent – mainly because there was no story, there was nothing to tell. Farage is lying, making up fake news to fit his rancid divisive narrative and to further his agenda.

“This should be the lead story on the national news, anyone remember the BBC doing this with our money? Nah me neither,” Farage bravely bleats as his little boat bounces up and down in the Channel.

The French navy has a duty under maritime law to help boats in distress, and many migrants threaten to jump into the water if the vessel is boarded. The navy is then left with no option but to shadow the boats.

But none of this suits Farage’s over-simplistic story of French treachery and an immigrant invasion set to destroy British jobs, get free houses and take down the NHS – which is also complete nonsense. It might have escaped Farage’s mind, but he fails to mention is all his ranting that illegal immigrants are indeed just that – illegal. And because of it, they don’t get anything at all – no national insurance numbers, no free houses, healthcare or anything else. When caught they go to some quite notorious immigration centres to be deported. If they are employed, their employers are breaking the law (in many ways).

Farage knows he’s tapping into people’s fears and in a world of self-imposed bubbles, inflated by social media – this makes the illusion all the more convincing

And as The Atlantic reports – “Here, the broader narrative is about British sovereignty, border security, and the alleged threat of immigration from Muslim-majority countries. Farage’s videos show him literally chasing after a boat – but he doesn’t interview the migrants on board, attempt to tell their stories or uncover their motivations, or find out what happens after the Border Force intercepts them.”

But by copying the grammar and style of news reporting, Farage knows he’s tapping into people’s fears and in a world of self-imposed bubbles, inflated by social media – this makes the illusion all the more convincing.

All of this then brings the copycats – those who would go another step further. Professional thug and rent-a-yob, Stephen Yaxley-Lennon, also known as Tommy Robinson, a member of the British far-right did the same, who then framed his activism as a quest to uncover the hidden scandal of “Asian sex gangs.” Being jailed for his version of ‘war-reporting’ was just another stunt but fed into his audience – the same audience that descended onto London last week after Yaxley-Lennon’s call (who then backed out at the last minute) – to ‘protect our statues’ by attacking the Police.

And it’s all very strange isn’t it when one of Britain’s most senior scientists gets politically thrown under a bus by the Tory party because he didn’t support their version of the Covid lockdown – when Farage was let off the hook for doing a 100-mile round trip to film migrant crossings in April. The police visited him at home to remind him of lockdown restrictions, which at that point forbade nonessential journeys. Farage claimed that he was a key worker: a journalist covering the pandemic. He was neither fined nor arrested. But journalism isn’t about creating fake news stories and blatantly lying to the public to further your own personal agenda – that is the opposite of journalism – even if The Telegraph decides in its infinite wisdom that it is.

Farage and Yaxley-Lennon both know that they satisfy a popular hunger for vivid tales of villains and victims, at the exact same time that the news industry is struggling financially. In our trustless, conspiracy-soaked age, it doesn’t matter that there is no evidence or that the real story is being told under another headline by those more responsible. And just to reiterate the point The Atlantic made –  “These stories are not designed to lead to an outcome—an inquiry, a conviction, a change in policy. They exist to seed the internet with culture-war talking points.”

This is something that the British government under Boris Johnson has successfully tapped into, to purposefully break down civil society through an old strategy called divide and rule – through the use of lying, misdirection and blatant propaganda. And somehow, the public swallows these ‘conspiracy-soaked’ fake news stories and are absorbed by the diversion and then get distracted from what’s really going on behind their backs.