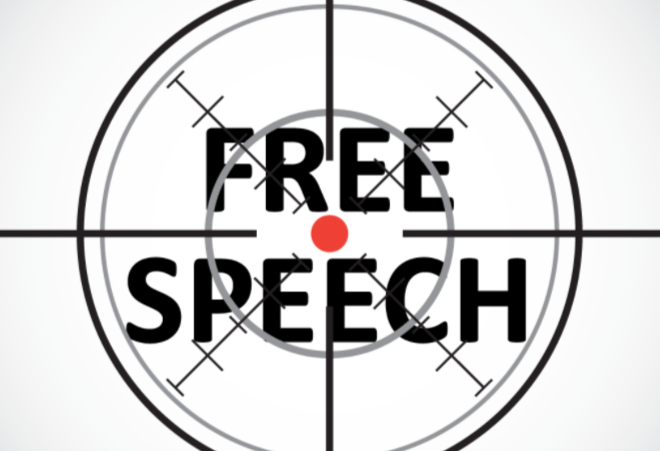 By TruePublica: Britain’s war on free speech continues and it continues to get darker with every step of classic playbook style mission creep. Having legislated against protests (without police permission) or protests in many public areas and legislated to spy and surveil the entire population is some grand Stasi style wet dream, the next jack boot to come crashing down on the face of civil society is the crushing of free speech.

It started with using tax incentives to ensure left-leaning, anti-war and free speech, civil liberty, human rights websites and blogs were censored by the global tech giants. Then, more legislation arrives, usually in the guise of ‘national security.’ Of course, a bogey man is required to blame and as the governments own track record on curtailing home grown terrorists is not so good, we’ve gone back to that good old reliable foe from the Cold War, you know, that country that has not once attacked Britain – Red Russia.

The entire mainstream media – bar none has gone with the story that a new intelligence unit tasked with preventing the spread of so-called “fake news” by foreign states is to be created. Not one has questioned the limitations of this this so-called National Security Communications Unit.

The Defence Secretary, Gavin Williamson, is expected to provide further details about the National Security Communications Unit soon. Williamson himself has been relentlessly mocked all around the world for suggesting Russia could cause “thousands and thousands and thousands” of deaths by crippling British infrastructure in some sort of infantile rant, or as we would call it – FAKE NEWS. Many have accused Williamson of losing his grip on reality. Russian Defence Ministry spokesman Igor Konashenkov said Mr Williamson’s comments were worthy of a Monty Python sketch.

Williamson told The Telegraph, who actually went ahead and printed it: “The plan for the Russians won’t be for landing craft to appear in the South Bay in Scarborough, and off Brighton Beach. They are going to be thinking: ‘How can we just cause so much pain to Britain?’ Damage its economy, rip its infrastructure apart, actually cause thousands and thousands and thousands of deaths, but actually have an element of creating total chaos within the country. It is a “real threat”, he added.

In the meantime, Williamson is accused of using national security and the press as some sort of diversionary tactic to move the gaze away from his own dodgy behaviour. “Sources close to a company that employed Gavin Williamson, the defence secretary, as a managing director say he attended a meeting to discuss his future after office colleagues became aware of his relationship with a junior colleague” – reported The Guardian. Apparently, Williamson said he decided to leave the company to save his marriage. That isn’t the issue. The issue is that we have a Defence Secretary prepared to deceive the general public using the national press as a shield for his own unethical antics.

Of course, there is no greater a conceivable threat from Russia than from any other country. Russia has not threatened the United Kingdom.

Britain, like America is turning its back on the global disaster it is responsible for in the Middle East and now needs to refocus on another adversary and Russia is it. This is why you have not seen so much in the press about the continued atrocities of ISIS, the ongoing destruction of Libya, the fall of Kabul and much more.

Apparently, the new unit will be staffed with professionals from Britain’s intelligence and security agencies, but will also rely on contributions from external experts in cybersecurity, communications and public relations, no doubt the same organisations that are robbing a largely unaware population of their private data – with impunity. The unit will also include a “rapid response unit” that will be tasked with countering “fake news” in real time, according to The Times.

The move follows a similar development in the United States. In December of 2016, the then President Barack Obama very quietly signed a new law that designated $160 million to set up a government centre for “countering foreign propaganda and disinformation”.

Wearechange.org reported at the time that: “This bill will “criminalise ‘fake news and propaganda’ on the web,” a key piece of legislation meant to crack down on free speech and independent media. In Layman’s terms, the act will allow the government to crack down with impunity against any media outlet it deems “propaganda.” The next piece of the legislation will provide substantial amounts of money to fund “counter propaganda,” to make sure the government’s approved stories drown out alternative media and journalists who question the status quo.”

Snopes, one of the so-called fact-checkers in the U.S. went to some lengths to explain why this wearechange report was itself both false and therefore fake news in its opinion. And then Snopes was proved wrong.

That law was then used as cover to immediately attack websites that went against the so-called national narrative of U.S. government policy – both domestic and foreign. Huge numbers of websites have complained of censorship. Many well known independent left-leaning outlets immediately reported massive falls in visitor numbers as their websites were deliberately hidden from search engines results and censored by social media.

TruePublica warned in December 2016 that: “Fake news and propaganda driven by government’s and corporations is of course, nothing new. Brexit and the American election have brought the subject into sharp focus more recently as the political class have been unexpectedly losing important desired outcomes. Consequently, in Britain, controversial laws will be introduced to stem free speech, which, over the passage of time will be used to halt any individual, website or news outlet from reporting against the government narrative, with so-called ‘fake news’ eventually being outlawed.”

On Wednesday it was announced in London that the British Secretary of Defence, Gavin Williamson, will be providing further details about the National Security Communications Unit in a speech to the House of Commons “within the next few days”.

This announcement will mark yet another piece of serious censorship in the UK. And as we reported just a few months back – the UK has fallen two places to 40th out of 180 countries, down 12 places in the past five years alone for freedom of the press. We lag well behind countries such as Ghana (26th), Namibia (24th) and Surinam (20th). At this rate, Tonga and even Botswana will be ahead of Britain in just two years time!

OpenRightsGroup accused the government last year that “Government Gives Itself Power To Block Websites Leading To ‘Massive Censorship’ through the Digital Rights Act 2017. They were on the mark and said at the time that:

“That’s the point we are making. The power in the Digital Economy Bill (now Act) will create a mechanism to block literally millions of websites; the only real restraint is the amount of cash that MPs are willing to pour into the organisation.”

The National Security Communications Unit is in fact that cash they were referring to. Not only has your privacy, personal security and freedoms been sacrificed on the alter of a false narrative via ‘national security’ – so has your right to free speech.