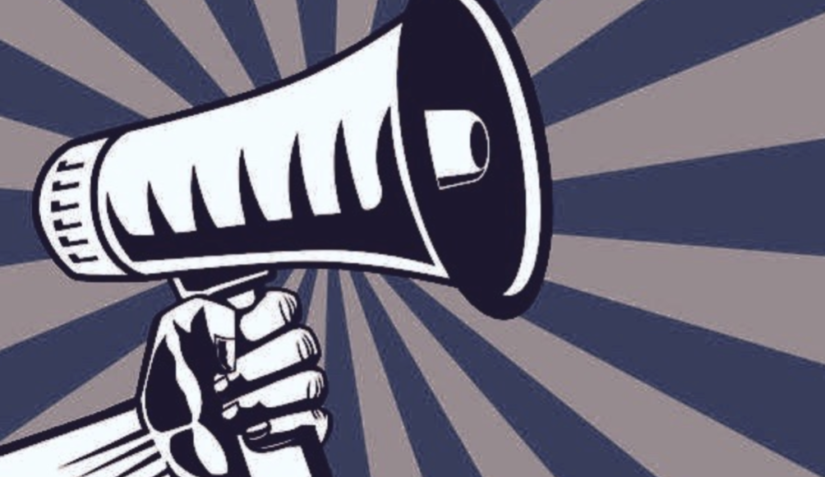 If you’ve ever wondered whether social media is just a vast network of automated bots interacting with other bots, congratulations,  your worldview may be dystopian, but it’s not exactly wrong. In fact, if anything you’re way ahead of what most people believe.

Exactly two years ago a study determined that on Twitter, at least, two-thirds of all links shared on the platform are done so by automated tweets powered by bots. The Pew Research Center studied over a million English-language tweets posted over a 47-day period in 2017 to determine the nature of Twitter’s link-sharing infrastructure. It analyzed 1.2 million tweeted links, which were all generated by just 140,545 Twitter accounts. Of those tweets, 66 per cent were generated by bots.

The problem is – social media sways public opinion. It doesn’t need to sway it much either as most (so-called) democratic elections are won within a margin of 5 per cent. Online social networks are now crawling with autonomous computer programs that spread propaganda in an attempt to manipulate and otherwise influence political processes and outcomes. Researchers are beginning to understand how these “bot” accounts are used to try to manipulate public sentiment on contentious issues.

Just to give a small single example of the millions of computer-generated and automated bots take a look at this. Complaints about UK journalism criticizing the government have been rife – and yet that is their job. They may not be doing it that well but criticism of the government any sort is a response target. But what looks like a growing army of people defending the government in times of crisis – is in fact automated bot account spewing out the same stuff.  Sometimes it is obvious. The same bots attack one Tweet and the same message is parroted. Just one of the messages attacking those who are criticising the government is as follows:

“Journalism is missing the ‘mood’ in this great country of ours – the United Kingdom. We do not want or need blame, We do want constant criticisms of our government who are doing their very best in a very difficult and unprecedented global emergency” 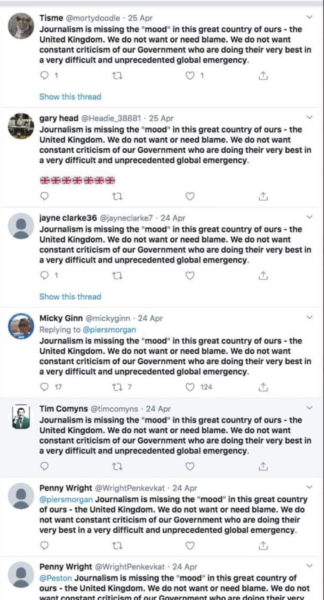 Looking at these Twitter accounts is revealing. The very first of these accounts is typical. Tisme or @mortydoodle was an account opened in January 2012. It has just 9 followers. The second, third, fourth and so on is more of the same. Accounts opened some time ago, has next to no followers but spewing out much of the same stuff – and it goes on and on. Almost universally, these accounts are retweeting as apposed to making individual comment – obviously.

Real-world political outcomes are demonstrating the reach and power of bot-driven Twitter campaigns, in which a core group of tweets spreads information rapidly by encouraging large numbers of retweets.

And who is it behind it? There are many actors who are financially motivated to cause trouble or instil an environment of doubt. Even the British government funds ‘77th Brigade‘. This is the British Army on the front lines of information warfare.  They edit videos, record podcasts and write viral social media posts. It is known that they are proficient in graphic design, social media advertising, and data analytics. Some may have taken the army’s course in Defence Media Operations, and almost half were reservists from civvy street, with full-time jobs in marketing or consumer research. We have no idea what they are pumping out. We’d like to think they are concentrating on defending Britain from negative foreign influence, but in the end, they do what they are told to do.

And we know the government are lying and manipulating the public on social media. First Draft – a non-profit organisation which works on debunking fake news – analysed every ad promoted by the UK’s three main political parties on the social media giant in the first four days of December during the last election. It found 88% of Facebook ads paid for by the Conservative Party contained misleading claims. It said out of 6,749 ads paid for by the Conservatives in a four day period, over 5,000 contained misinformation or just plain lies.

Aside from the COVD-19 crisis, the trend for trust in government is at an all-time low. Democracy is fading and social media exacerbates this decline. Social media giants refuse to moderate and so deliberate political actions taken by an incompetent government are defended by those hiding in shadows – those like the tweets you see here.