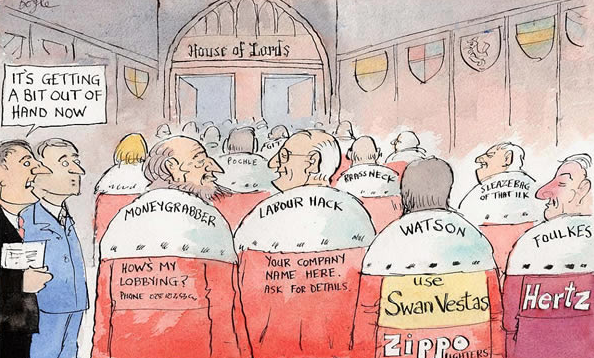 By Democratic Audit: The Lords is an affront to democracy and Parliament as a whole is regarded as untrustworthy. The second chamber should be replaced by a 160-strong citizens’ assembly, whose members would be chosen to serve a two-year term by sortition – just as juries are picked now.

Sortition – the process of selecting political officials or populating assemblies by lottery – has been largely marginalised in representative democracies. However, in the light of declining trust and engagement, the principle of once again randomly selecting public officials deserves consideration. Sortition should not replace elections always and everywhere, but be combined with representative democracy, to help the causes of inclusion and considered judgement.

We could start with the House of Lords – currently “an affront to democracy”, as Nick Clegg has put it. Too large, woefully unrepresentative and preserving aristocratic privilege, the appointed Lords besmirches British democracy. Ninety-two of the peers gain Parliamentary membership by birth; “major party donors can still effectively buy peerages”. Only a quarter are women, around 8% are from BME backgrounds, half live in London or the south-east, half went to independent schools and 26 seats are occupied by Church of England bishops – a privilege not extended to any other religion nor denomination of Christianity.

Its defenders argue the Lords have extensive experience of the world outside Parliament. However, over a third previously worked in politics and of the peers appointed since 2015, 62 were former MPs, special advisers or party aides. The Lords is also“highly partisan” with crossbenchers largely inactive and over 70% of peers taking a political whip.

An elected Senate is problematic

Given the constitutional role of the Lords and declining levels of trust in political parties, the proposal to elect it is deeply problematic. The role of the Lords is to serve as a revision chamber, scrutinising and amending legislation passed by the Commons, often prompting the elected chamber to ‘think again’. Unable to veto legislation, but only delay its enactment, it serves as a complementary internal check and balance on the Commons. It is not supposed to be a competitor to the Commons. Were Britain’s upper house to be popularly elected, “a potentially destructive alternative” would be created. Furthermore, when under a fifth of respondents trust political parties or political leaders to ‘do what is right’, democratic alternatives to elections and parties deserve attention.

A House of Citizens

By assembling a ‘minipopulus’, as Robert Dahl describes it, a Citizens’ Assembly in Parliament would be able to deliver genuine inclusiveness and representativeness. Using stratified random sampling, all social groups can be adequately represented. Ontario’s and British Columbia’s Citizens’ Assemblies on electoral reform (2007 & 2004), as well as the 2006 Dutch Burgerforum Kiesstelsel are examples.

In Ireland, however, citizens were able to choose not to participate in the Irish Constitutional Convention (2013). This creates the potential for a self-selection bias among participants (with the more affluent and better educated disproportionately willing to participate). To overcome this potential limitation, participation in the House of Citizens – like jury service – should be a legal obligation, with people only exempted in exceptional circumstances.

Although this would place a considerable burden on citizens, the House must be truly representative of the wider population if it is to improve the trust and legitimacy of Parliament. Mandatory participation is the best way to ensure that participants are not simply those with either greater free time or interest in politics. Many people will want to take part – but for those will struggle to do so because of caring responsibilities or disability, members of the House of Citizens should be able to use Parliament’s nursery or have their childcare or other care costs reimbursed. Some members could work from home part-time with the help of the right technology. If someone from a disadvantaged group is genuinely unable to take part without undue stress or turmoil, they could be replaced by another member of the same group – so that the place of an exempted disabled person would be taken by another disabled person.

Given the slim chance of being selected, would a House of Citizens really help political engagement? The answer is yes: firstly, it would increase trust in Parliament; and secondly, the chamber itself would very probably influence our political system to further devolve power to citizens.

An elitist distrust of ordinary citizens permeates much of the discourse surrounding sortation. It argues that ordinary citizens are for the most part too ignorant to be included in the important business of governing. This is unsurprising, given that representative democracy rests upon a similar logic – to elect only those deemed skilled or qualified enough to legislate on our behalf. However, sortition would turn this logic on its head, serving as an arational blind break that precludes bias. Some would worry about the loss of expertise or ‘the best people’ from governance. Yet all the evidence from Citizens’ Assemblies indicates that citizens are capable of making informed decisions on highly complex issues.  For example, the British Columbia case “demonstrated how extraordinary ordinary citizens are when given an important task, and the resources and independence to do it right”. Given the well-documented ability of citizens’ assemblies to deliver considered judgement, a House of Citizens could make Parliament a more deliberative place. Through learning, consultation and deliberative phases citizens would be able to receive evidence from witnesses and cross-examine experts. Then as a socially diverse group, and in an environment predicated on fairness, citizens would be able to discuss and deliberate.

Unlike the highly partisan Lords, citizens are not representative of specific groups or interests – probably making them more willing to change their views in light of evidence and deliberation. Evidence from UK and US citizen’s juries (another form of minipopulus) finds that participants “almost always change their minds during the sessions, as they become more involved in the issues”. In citizens’ assemblies, people are not only capable of participating but willing to do so, motivated by this democratic innovation.  For instance, participants in the NICE Citizens’ Council were motivated by “a sense of being ‘privileged’ to have been selected”. Similarly, only one of the 161 members withdrew from the British Columbia case, and attendance was almost perfect. Adequate remuneration for members of the House of Citizens, along with the importance of the proposed chamber, should ensure a strong willingness to participate.

Would citizens be accountable?

The idea of a Citizens’ Assembly at the heart of Parliament challenges our traditional understanding of accountability. Citizens would not be subject to the usual “mechanisms of re-election or removal from office” (M E Warren) and they would have “no direct bonds of accountability to nonparticipants”. But as deliberative theorists have highlighted, accountability in a Citizens’ Assembly can be realised by justification, where an account of the reasons that underpin a decision are given. This would represent an improvement to the nearly nonexistent accountability of the current Lords. The fact that final decision-making power would remain with the Commons should ameliorate some critics’ concerns. Term limits of two years should also prevent citizens becoming institutionalised. A smooth transition between cohorts would be ensured by staggering term limits, with a quarter of participants rotating out every six months.

An idea whose time has come

The ‘cracks in the wall’ of representative democracy are beginning to show. Policy options and reforms that may have hitherto seemed too radical or experimental now deserve serious and genuine contemplation. Replacing the Lords with an assembly of randomly selected citizens represents a fantastic place to begin. Democratic citizens, as Pippa Norris has argued, are increasingly educated, critical and less deferential: they deserve a political system that empowers and engages them. After all, as John Dewey put it, democracy is more than the just the ballot box. It should be “a way of life”.