REPORTS: Britain – Now A Chaotic, Out Of Control State 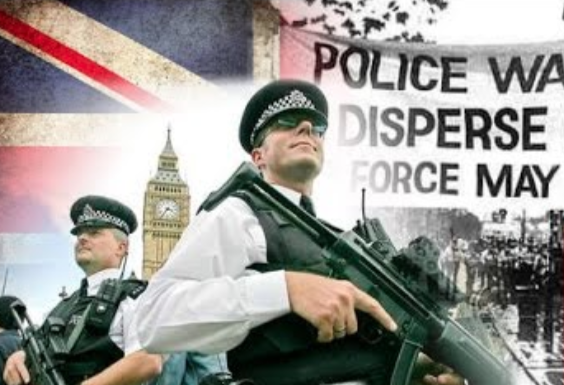 By TruePublica: Unreported by most of the mainstream media are some quite startling events going on in the background behind the cacophony of Brexit. There is, for example, the astonishing revelation that Britain’s domestic intelligence service, MI5, has enjoyed the freedom, with impunity, for decades, to go about its business, having been given the legal cover to participate in crimes that extends to state-sanctioned murder, torture and sexual assaults on the streets of Britain.

Somehow, the government is outraged if the Russians get up to this type of stuff. The repercussions were and still are serious enough for them that includes state sanctions, diplomatic expulsions, asset seizures, etc. But for our own spooks, it’s OK. These revelations are not the stuff of conspiracy theories or James Bond books. If the state decides you need a bullet or being sexually assaulted for that matter – then so be it.

In the meantime, in another largely unreported case, the state has decided that jailing non-violent protestors for the first time since 1932 is now the new norm. Local people, supported by their local council who have fought off the fracking giants from destroying their local community are now languishing at Her Majesty’s pleasure for 16 months. Imagine that – 16 months prison and a criminal record for life (more on that in a minute) for attempting to protect your home. Where is the red-line here – jailing NHS or teaching staff for protesting about their working conditions?

Last week, the European Court of Human Rights (ECtHR) ruled that the UK’s mass interception programmes have breached the European Convention on Human Rights. Six months earlier Britain’s supreme court said the same. And what do we mean here? The state has taken compromising images of you and your family, stolen your private information including financial and employment details, your sexual and political persuasions and much more and shared it with all sorts of agencies. In what part of a functioning democracy does it say it’s acceptable to construct a 360-degree architecture of surveillance so extreme that it resembles as one ex-MI5 agent describes it – an electronic concentration camp.

Also last week, a new policing super-database is in the works – and it puts our rights at further serious risk. But the Home Office has failed to respond sufficiently to civil rights campaigners concerns. Liberty are so concerned, they’ve backed out of being part of a process that gives the police a free pass to what they say is a “creeping expansion of digital policing that shows contempt for our privacy rights”.

Liberty says that this unprecedented development will see the government amass deeply sensitive data for policing purposes in a creeping progression of surveillance and algorithmic policing. The police have even admitted that data they no longer have any legal right to hold will be transferred to the new database and that having done so, even allow our data to be shared with non-policing organisations.

All that means is that the government and its agencies no longer stand up to the mildest scrutiny when it comes to law and order. They are not just breaking the law (as deemed so by the courts) but creating an environment where order breaks down.

Then there’s the Electoral Commission’s investigation into Vote Leave, the official pro-Brexit referendum campaign, which was leaked, revealing Vote Leave of being guilty of breaking electoral law, on multiple accounts. Of course, it had to be leaked for the public to know this.

Then there was Cambridge Analytica, the disgraced, bankrupted and then ‘phoenixed’ big data company that was using misappropriated Facebook data to sell elections to the highest bidder. Facebook got the maximum fine of £500,000. Not really a fine when considering its turnover of $40billion with net profits of $15billion.

Nigel Farage’s Leave.EU – the unofficial Brexit campaign bankrolled by the infamous insurance tycoon Arron Banks – was found guilty of “multiple breaches of electoral law.” He was fined £70,000 – the equivalent of a speeding offence fine to multi-millionaires.

Then there are the billionaires, bankrolling ‘think tanks’ and charities that are really just front companies that influence the political narrative whose only intention is to profit from the chaos that their version of Brexit will cause.

The fines metered out are pitiful and meaningless, no-one is arrested. A bit like the handling of the egregious crimes of the banking industry in 2008 that lingers on and on. New outrageous crimes and cover-ups are still being committed by the government (See YouTube – Interview Keiser and Neil Mitchell – RBS from 13 minutes) that are simply breathtaking.

Six months ago, the Electoral Reform Society published a new report on the health of democracy in Britain. Amongst some of its findings was that:

Or another way to put it is this. Around 80 per cent of the electorate do not trust politicians at all. Why then, would they buy into their vision of the future?

Chris Terry for Electoral Reform said: “We need real democratic change in this country to put voters at the centre and prevent a slide towards alienation.”

The Information Commissioner Elizabeth Denham said just three months ago: “We are at a crossroads. Trust and confidence in the integrity of our democratic processes risk being disrupted because the average voter has little idea of what is going on behind the scenes.”

A few months further down the road, Britain is in the midst of a political and constitutional crisis and we have what can only be described as anarchy by the rich and powerful who no longer see that law and order applies to them.

This is Britain today. A state murdering and torturing on its own streets. A state that jails local people for protesting about the destruction of their communities and protecting their homes, a state that illegally surveils your every move and steals your most private information, a state that gives sweeping unaccountable powers to the police. All the while, democracy is being dismantled right in front of our eyes with foreign billionaires deciding Britain’s future.

In little more than a few years, our politicians have actively facilitated the chaos we find ourselves now in – more increasingly a paranoid state out of control. Britain is on a very bad trajectory.

Make no mistake, we are in a battle for the very heart of a dwindling democracy, for our civil liberties and rights. Imagine what Britain will look like in 10, 20 or even 30 years out from now on its current orbit.  Future generations will not forgive us for standing idly by and doing nothing.