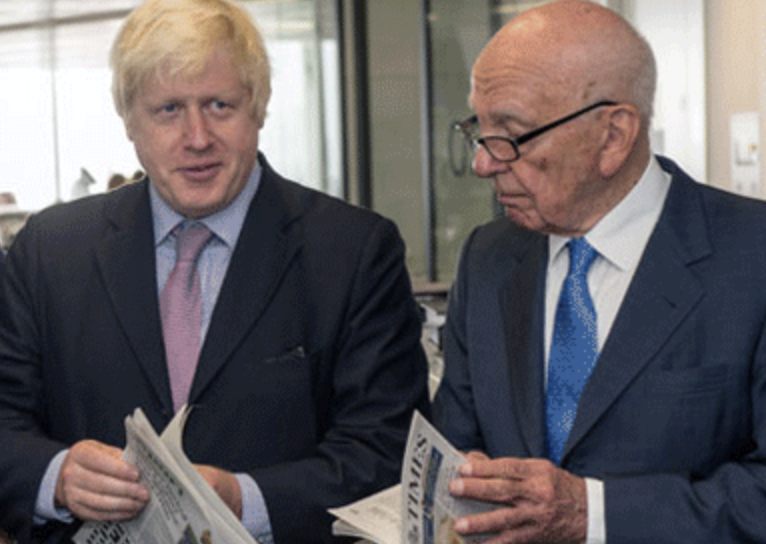 By TruePublica: It appears that the News Corp executive chairman Rupert Murdoch and his top executives in the UK and US met Prime Minister Boris Johnson and other high-level Government politicians seven times between them in seven weeks last summer. Worse, it has since emerged that News Corp editors and execs from the UK and America met ministers 40 times in the first 14 months of the Johnson government indicating a high level of foreign interference into the affairs of British politics.

Press-Gazette reports that “Murdoch met with Johnson, paid for lunch with Chancellor Rishi Sunak, ate a private dinner with Michael Gove and had an “informal lunch between friends” with Jacob Rees-Mogg between 8 August and 25 September last year. News UK chief executive Rebekah Brooks met with both Johnson and Sunak within one week in September, and News Corp chief executive Robert Thomson each met Johnson held a meeting with Gove at the start of the month.”

In addition, Murdoch has met with Johnson three times since he became PM and Murdoch’s company, is the media organisation which has met Johnson and top members of his Government by far the most times since he became PM in July 2019, in fact, about 225 per cent more than any media rival. 80 per cent of discussions were classed as ‘general discussion’ – meaning nothing at all to those not present.

It is seemingly no coincidence then that an Ofcom television broadcast licence has been granted to GB News, the first in 30 years since … Sky News was launched – also a Murdoch enterprise. The channel plans to air 6,500 hours a year or 18 hours a day of what they consider will be “original news, opinion and debate” and launches next month.

Well before its launch date, GB News has been mired in controversy over what is assumed will be a right-wing bias. Given the individuals involved so far – that would appear to be the case. Andrew Neil, former BBC news and politics presenter, was Murdoch’s editor at The Times, and became founding chairman of Sky TV, also part of Murdoch’s News Corporation. Neil is also chairman of the right-wing Spectator magazine and has strong ties to the Daily Mail. The editor of The Sun has also been announced as a news anchor for GB News.

In the 1980s, Neil claimed that although he shared some of Murdoch’s right-wing views, “on many matters Rupert was well to the right of me politically”. And yet, in his first editorial, on 9 October 1983, Neil advised Margaret Thatcher’s government to “move to the right on industrial policy – to deregulate and privatise.” Four decades later, the manufacturing wastelands of the north have since become the central pillar holding up Johnson’s majority. The ‘levelling-up’ programme is an attempt to fix exactly what went wrong with Thatcher’s anti-manufacturing policy. And not all privatisation has been a success. The rail networks needed a full state bailout due to the pandemic and water companies have proven to be a disaster.

In 2012, A parliamentary select committee report concluded that Rupert Murdoch was “not a fit person to exercise the stewardship of a major international company.”

It also turns out that Ofcom is to be chaired by extreme anti-liberal and full-on right-wing mouthpiece Paul Dacre – without doubt, one of the most toxic (and influential) individuals in the media since the last World War. Another stooge placed into the role of influencing how government is perceived is a former banker, an adviser to Boris Johnson and major Tory donor Richard Sharp. Sharp donated over £400,000 to the Conservative party and was on the board of the right-wing think-tank, Centre for Policy Studies founded by Margaret Thatcher – a very strong proponent and influencer of Brexit. He has reportedly donated to the Quilliam Foundation – a think-tank targeting Islamic organisations, led by co-founder Maajid Nawaz – who has been associated with Tommy Robinson the far-right English nationalist.

We should not forget that Rupert Murdoch is not only one of the most influential political actors in Britain today – but his businesses have been constantly involved in criminal investigations on both sides of the Atlantic with allegations of computer hacking, accusations of fraud and questions of political interference and payouts. Murdoch’s businesses worldwide have made compensation payments for all manner of criminal and immoral activities – even including advertising clients who felt they were being ripped off on pricing.

We also shouldn’t forget that it was a Murdoch employee that (allegedly – yes, we still have to say this) hacked into the mobile phone of murdered girl Milly Dowler, relatives of deceased British soldiers, and victims of the 7 July 2005 London bombings – just for a story. In addition, it has been accused of police bribery (source). In that, the commissioner of London’s Metropolitan Police Service (MPS), Sir Paul Stephenson, also resigned. Murdoch’s newspaper have sourced information by people arrested for crimes including drug distribution, the theft of drugs, child pornography, planting evidence, corruption, and perverting the course of justice.  Operations Nigeria, Motorman and Glade were all instigated in the UK, which uncovered yet more illegal activities of information sourcing involving bribery, corruption, data theft and illegal access to databases such as telephone companies, the Driver & Vehicle Licensing Agency and even the Police National Computer system.

In the Levison Enquiry – Rupert Murdoch admitted to a cover-up. On 1 May 2012, a parliamentary select committee report concluded that Murdoch was “not a fit person to exercise the stewardship of a major international company.”

It is now 2021, and the government has jumped into bed with an individual deeply involved in all these crimes and the misery it has brought to many. There is no doubt that Rupert Murdoch is drenched in immorality, depravity, misconduct and wrongdoing. By his association with Murdoch – Boris Johnson is breathing life into a type of politics that America is now suffering – division and hatred. It is now on course to get worse in Britain.

John Pilger – Murdoch may be a convenient demon, but the media is a junta