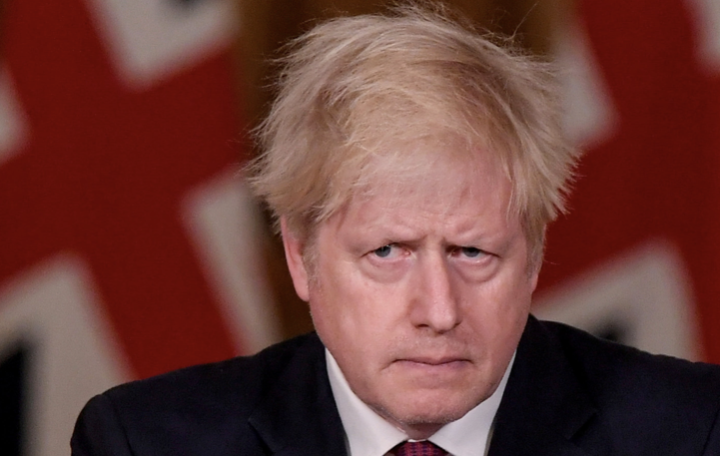 By TruePublica: It is true to say that the government of Boris Johnson isn’t fascist – it is however very right-wing.  And it is also true to say that attacking Johnson or his ministers as exercising elements of fascism is quite likely to be viewed as hysterical and could well undermine the fightback against the very real threat to democracy that they pose. But that doesn’t mean to say that they do not have these tendencies and it doesn’t mean to say that over the course of time, this government won’t become something that looks like one. Taking the current trajectory, this assumption is not far-fetched at all.

To be clear, the political practice of fascism is traditionally manifested as violence by third parties. Fascists like to assault its “enemy” groups. For instance – Johnson’s “bank robbers and letterboxes” remarks in the summer of 2018 caused a spike in assaults on Muslim women.  This form of casual endorsement of racism from “respectable” politicians does only one thing – it gives a green light, whether organised or not, for extremists to go ahead. In this case, it was a licence for mockery, hatred and then physical attack. And it didn’t stop there. A culture war spins off based around racism, which then spins off into something else. It’s in the ‘divide and rule’ playbook. This is no slip of the tongue – they know precisely what they are doing.

Calling any government fascist in a democratic electoral system seems counterintuitive, but consider what has happened in the last 18 months and what another four years could do. Also, consider what this government might look like if no pandemic had arrived.

These are just a couple of many headlines that have emerged since Boris Johnson came to power that begins to ask that question.

Boris Johnson may not be a fascist, but he’s certainly started talking like one  and “Is it time to use the F-word about Boris Johnson’s disastrous regime?“

A decade ago, it would have been inconceivable that you would be reading mainstream newspaper headlines about a British government exercising the characteristics of a light form of fascism. Consider this week, for instance, The Times headline – “Newspapers unite to condemn blacklisting of journalists from freedom of information.” Its report says that Michael Gove has, through the cabinet office, demanded that Freedom of Information requests are filtered through what can only be described as a censorship unit. In addition, certain journalists – basically anyone associated with the media attempting to scrutinise officials or their actions – may be blacklisted.

The Times, The Sunday Times, The Daily Telegraph, The Guardian, the Financial Times and the Daily Mirror, in addition to prominent investigative journalists and free-speech campaigners have written to the government to strongly protest these undemocratic actions.

John Witherow, editor of The Times, did not mince his words: “Transparency is not a privilege or a gift bequeathed to a grateful citizenry by a benign government. It is a fundamental right of a free people to be able to see and scrutinise the decisions made on their behalf. That message has failed to get through to the government of Boris Johnson, which seems hellbent on making it harder. This is not only a disgrace but a mistake.” Witherow went on to say – “Freedom of information requests are a vital journalistic tool for shedding light on the actions and behaviour of powerful organisations. Any institution that frustrates them is an institution that has something to hide — the Cabinet Office’s ‘clearing house’ does just that.”

Be in no doubt then that the government is censoring the news. And be in no doubt what Witherow said about the “rights of a free people.”

Censorship of information or the news is just one example of a few characteristics of fascism. There are different forms and extremes of it. George Orwell once wrote in 1944 that “the word ‘Fascism’ is almost entirely meaningless … almost any English person would accept ‘bully’ as a synonym for ‘Fascist.’” As Orwell makes clear – you don’t have to look like one – to be one.

Other characteristics of fascism are things like – powerful nationalism, identification of enemies as a unifying force, disdain for intellectuals, academics and experts, controlled mainstream media, disdain for human rights, corporate power protected, labour-power suppressed, rampant cronyism and corruption,  and the elevation of divisive topics such as sexism, racism and so on. Of course, later on, protests are banned, groups and activists are proscribed as national threats and therefore treated as terrorists where an obsession with national security emerges.

Frequently cited by reliable sources as a standard definition of fascism, is that of historian Stanley G. Payne. He focuses on three concepts: negations, goals and style.

Many political commentators such as Professor Jason Stanley, observed that “the leader proposes that only he can solve it and all of his political opponents are enemies or traitors.” It may well be that as a person who reads the news and is politically aware, you have seen how Brexit has dramatically changed the national narrative of Britain – and indeed impacted on what was once a renowned pleasant country of largely polite folk. One of Stanley’s observations can be seen in the vilification, defamation and smearing of Jeremy Corbyn prior to the last election. It makes no matter what your political persuasion is – what we all witnessed prior to the last election was not democracy in action – but something entirely different.

The Times headline is just one part of a jigsaw puzzle that is starting to build a picture that we should all be very wary of. The links to news stories below are picked at random. And there are dozens of articles on each topic – all emanating from 2015 and then rapidly rising from when Boris Johnson came to power in July 2019 and especially so after the snap election in the following December. We should not forget that in this backdrop – Johnson has also given himself extraordinary powers not seen in Britain for several hundred years (in peacetime).

Identification of enemies as a unifying force

Disdain for intellectuals, academics and experts

Elevation of divisive topics such as sexism, racism and so on

Protests are banned, groups and activists are proscribed as national threats and therefore treated as terrorists

When Benjamin Ward, the European Deputy Director of Human Rights Watch accused Boris Johnson of deliberately eroding Britain’s democracy, he wasn’t the first high profile political commentator to do so. Others too have accused the government of using elements that look a lot like fascism. Gaming appointments to parliamentary committees that scrutinise its policies is just one. It even forced the appointment of the chair to the only committee that can summon and question the prime minister – the Liason Committee.

The government has brazenly attacked the judicial system and undermined the country’s independent legal system and as Ward says – “pilloried the legal profession, dismissing human rights lawyers as “activists”, “lefties” and “do-gooders” merely for doing their jobs.”

The list goes on – such as the illegal prorogation of parliament. Lying to the Queen, to the Commons, Lords and anyone else now appears to be the new normal.

Why does all this matter? Well, as Ward points out – “democratic institutions are fragile and that elected governments willing to subvert them can do lasting damage to the democratic fabric of a country as well as to its citizen’s human rights.” It also matters because the government has to be accountable. The UK has one of the highest Covid-19 death tolls in Europe and the worst economic outcomes. The weakening of parliamentary scrutiny, which this particular government excels in, makes it much harder to force it to change course and act to avert further deaths. It also matters because protecting our rights should not depend on the whim of the government, especially one that places little importance to the rule of law. Another example is how parliamentary scrutiny of the Brexit deal was effectively shut-down – and look how that is turning out.

In all of this, you have to ask yourself a question. What will Britain’s political landscape look like when the next election comes around because it’s a long way off?