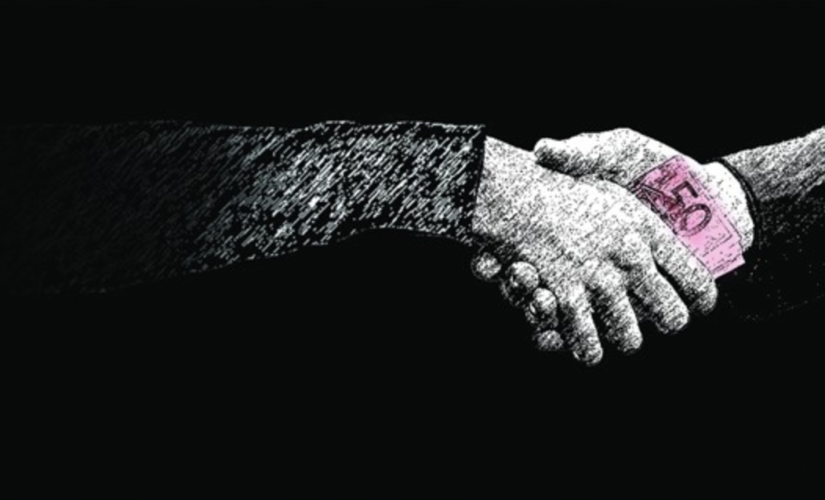 By Graham Vanbergen – TruePublica: It was only a couple of months ago that the UK elections watchdog, the Electoral Commission, fined the Scottish Unionist Association Trust (SUAT) for repeated failures to declare more than £200,000 in donations to the Scottish Conservatives. The outrage here is that after a 14-month probe in 2018, the commission concluded that SUAT had “consistently failed” to adequately report political contributions – leaving the public without “the transparency it was entitled to have of SUAT’s finances”. The trust said its net assets at the end of 2017 were £2.35 million, and it is known to have donated £364,000 to the Scottish Conservatives. This is one small example of dark money at play.

Why the outrage? Because the fine for doing what it did – and let’s call this out – for attempting to rig the outcome of an election – was the princely sum of £1,800. That sum simply represents the cost of doing business to those with the deepest pockets. It will not, by any stretch of the imagination, deter dark money funders in this December’s election in Britain from infecting it with millions attempting to rig the outcome.

From April to September this year, the Electoral Commission was swamped with over forty investigations that required fines to be issued.

Just one of those fines involved the far-right party Britain First. It was found to be guilty of – ‘Failure to comply with a statutory notice; failure to deliver audit report for accounts; failure to maintain accounting records; failure to deliver accurate quarterly donations reports’. It was fined a total of £44,200 (£20,000; £5,500; £11,000; and £7,700). Britain First is also accused of opening a shell company and hiding £200,000 that came from a single source and still, no-one really knows where it came from or who paid it.

Another fine was metered out for failure to provide notification of gifts to a political party exceeding £25,000 and failure to deliver donation reports as a members association. Again, the fine was just £1,800.

Almost all of these investigations centre on money – donations and accounting ‘errors’ where over 80% of them end with an offence being discovered and a fine issued. Interestingly, the Electoral Commission’s homepage actually starts with investigations against half a dozen organisations or individuals, namely – Leave.EU, VoteLeave, BeLeave, Veterans for Britain, UKIP, Better for the Country and Momentum.

The director of ‘Unlock Democracy‘, Alexandra Runswick said: “Penalties for rule-breaking must be proportionate, but time and time again the fines handed out by the Electoral Commission give a slap on the wrist to the rich donors that are bankrolling our politics. Campaign finance rules are completely unfit for purpose and have made UK politics a playground for the rich, and money is pumping through the veins of our political system and undermining democracy by allowing influence to be purchased by those who can afford it.”

Like the Electoral Commission, Runswick isn’t able to say who these rich donors are – because many of them are undeclared, hiding behind illegal campaign groups, front charities and so-called think tanks. These donors are classed as ‘special interest’ groups like those involved in climate denial or pushing the interests of the pharmaceutical or agricultural industries. And with so much at stake with Boris Johnson and the radical right wishing to (economically and politically) pivot from the European Union to the United States, one only has to listen to this senator telling the Senate Democrats’ Special Committee on the climate crisis, about just how frightening dark money and its representatives can really be:

“The hardest part is to try to figure out about the conversations that took place — powered by the unlimited dark money capability that these special interests have. The hardest thing to find around here is the small room where the lobbyists and the candidate met and the lobbyists said, ‘We are coming after you, you are toast if you don’t do what we say.’ And the candidate realizing that with millions, even billions of potential dark money spending to drop, that is a very real threat.”

We should also not forget either that the very wealthiest back-bench MP’s are all Conservatives with personal interests in mining, food, medicine, law, finance, healthcare, defence and the fossil fuel industry – or that nearly 70 peers and MP’s have been found to be directors or have controlling interests at companies linked to tax havens. Then there’s the dozens of MP’s who in 2014 were found to have financial interests or links to private healthcare companies – people like Jo Swinson, Jeremy Hunt, David Davies, Iain Duncan-Smith, Sajid Javid, Priti Patel and Jacob Rees Mogg to name just a few. All of these people are keen to have a trade deal with America who view the NHS as a business opportunity to exploit.

Donors and dark money and the polls

As identified through the elections watchdog, the Electoral Commission, and the parliamentary register of members’ financial interests, 65% of Boris Johnson’s donations came from hedge funds, city traders and rich investors. And as Byline Times reports – “Out of 40 donations made between Johnson announcing his leadership bid on 16 May and 23 July, when the result of the Conservative Party leadership election was announced, up to 30 of those donations were either from hedge funds, part of the City or wealthy investors.”

What was interesting was that Byline Times then calculated the value of short positions of donors which was, as of 8 September 2019, around £4.6 billion. Once donors to the Vote Leave campaign are added, this figure rises to a position of around £8.3 billion vested in a declining domestic stock market. Conflict of interest and the ministerial code mean for nothing in British politics today, nor does campaigning within electoral laws.

In September, Boris Johnson’s aides in Downing Street had “opened channels” with the Brexit Party to discuss a formal general election pact, this was according to close associates of Nigel Farage. The Conservatives, of course, denied any such conversations took place and that no pact is in place – but there’s no reason to believe what they say given their form.

This week TruePublica reported that there is new evidence that could lead to criminal charges against the pro-Brexit campaign led by Boris Johnson and his key adviser Dominic Cummings, which has now been passed by police to the criminal prosecution authorities. The police have taken 14 months to get this far and all the indications are that this case has legs.

There is new evidence that could lead to criminal charges against the pro-Brexit campaign led by Boris Johnson and his key adviser, Dominic Cummings, which has now been passed by police to the criminal prosecution authorities.

We should not forget that the pollsters in Britain were up to their necks in acts of corruption in the EU referendum – and Nigel Farage still stands accused of being in the centre of it. In the book ‘Brexit – A Corporate Coup D’Etat‘ – published as plain as day are the words “Behind the scenes, a small group of people had a secret—and billions of dollars were at stake. Hedge funds aiming to win big from trades that day had hired YouGov and at least five other polling companies, including Farage’s favourite pollster. Their services, on the day and in the days leading up to the vote, varied, but pollsters sold hedge funds critical, advance information, including data that would have been illegal for them to give the public.” The pollsters were calling the EU referendum as a win for Remain, watched the pound Sterling rise to a 6-month peak and with the announcement of the Leave win – Britain’s currency crashed. Billions in short bets placed by hedge-funds profited from this momentous fall. Six months later – Bloomberg reported that – a lucrative line of business had been born for the polling industry, by lying to the public and selling critical information to the hedge funds. Crispin Odey is one such hedge fund manager who benefited. He was also a top fundraiser for Farage and a leading contributor of campaign cash to the pro-Brexit side. From that (very informed) bet he made about $300 million and is now betting that lot on 16 firms expected to do badly out of the chaos inflicted on the markets through Brexit. It’s easy to see why the stakes are so high when highlighting these small examples of many that exist.

Back in July 2018, TruePublica reported that – aggressive far-right political actors from the USA have set up shop in Britain in readiness to ensure the continuance of the Conservative party at the next election in order to facilitate the further exploitation of Britain by American corporations in a post-Brexit world

UK Policy Group is the UK’s name for that organisation. Their homepage says – “We are a unique political consultancy that helps organisations and individuals to thrive in an increasingly complex world.”

UK Policy Group’s all-male leadership team isn’t from the commercial world though but appears instead to be drawn almost exclusively from the Conservative Party, including some with a background in what they call ‘opposition research’. It provides the dirt in dirty campaigns such as ‘dossiers’ on ‘targets’ that provide ‘comprehensive, detailed analysis’ of an opponent’s record, background and views, information which, they say, can be used to shape stories in the media. Dark money is what funds these shady organisations.

It’s not just UK Policy Group or those caught out in the last three years known to be clawing away at Britain’s delicate democracy. There are now a number of special interest groups in Britain that are funded by American organisations with a conservative world view derived from the dark shadows of religion, white supremacy and what is now known as the ‘triad of family life.’ Orthodox, Evangelical, and Catholic leaders pledged a decade ago to act in unison – and have pumped $50 million into targeting more fragile EU member states – as they have in Britain. Combined with other special interest groups such as climate science denial groups, anti-abortionists – their co-ordinated multi-faceted approach to gaining the power they want has been remarkably successful.

We should not be naive any more. It is a simple fact that corruption funded through dark money is coursing through the veins of our democratic system. It is a simple fact that those with the deepest pockets can buy not just influence with politicians but the outcomes of a national election or referendum. The woefully insubstantial penalties for wrongdoing serve as the biggest advertisement ever to those with designs on profiting from an outcome that is delivered by breaking the law – and is definitely a price worth paying. The evidence for that is after all the allegations, investigations, warnings and dozens of fines for their law-breaking – no-one sits in a prison cell for attempting to profit from taking Britain down using illegal dark money tactics.