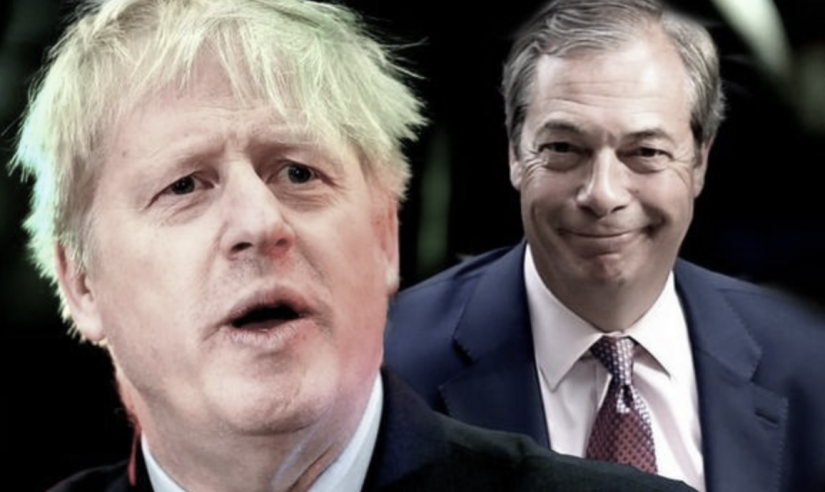 By James Cusick and Peter Goeghegan: Boris Johnson’s aides in Downing Street have “opened channels” with the Brexit Party to discuss a formal general election pact, according to close associates of Nigel Farage. The two-party leaders have not talked since Johnson became Prime Minister. However, back-channel meetings between Number 10 and Brexit Party officials have taken place. Further talks, according to sources contacted by openDemocracy, are scheduled over the coming weekend.

They will include arranging a public meeting between Johnson and Farage that could take place shortly after parliament prorogues next week.

Tory MP Ed Vaizey said that a pact with Brexit Party “would be the death of the centre-ground Conservative Party.”

Downing Street would not comment on the Prime Minister’s private schedule and would not acknowledge any contact with Farage or his party’s staff.

As well as agreeing a strategy for Brexit and Tory party candidates not to challenge each other in critical marginal seats, a pact could also free up needed donor cash to fund the expected £20 million the Conservatives believe is needed to deliver a successful election campaign. The party spent £18.5m in 2017 and failed to secure a majority.

Even if Johnson agreed to a Tory withdrawal in seats where there was little prospect of a Conservative victory, there are many Tories who believe any public deal with Farage will damage an already fragile Tory brand under Johnson’s leadership.

Ed Vaizey, a minister in David Cameron’s government, and one of the 21 MPs thrown out of the Conservative Party this week after voting against the Johnson government to stop a no-deal Brexit, told openDemocracy:

Johnson’s chief of staff, Dominic Cummings, is a known critic of Farage. Cummings, who ran the official Vote Leave campaign, tried unsuccessfully to airbrush Farage’s own Leave.EU campaign contribution out of the Brexit victory.

Any accommodation with the Brexit Party by Johnson will be seen either as a massive compromise for Cummings, or a sign that his power is being curtailed.

“We know support from some of the biggest donors is being put on hold. Some big backers who have funded the Brexit and Conservative parties, want a deal to secure Brexit. This is money the Tories need to fight a winning election campaign. And it’s on hold till a formal pact is agreed.”

The Johnson-Farage pact could also go further. A senior figure in the Brexit Party said that Arron Banks, who funded the unofficial Leave.EU campaign, was prepared to donate substantial funds to the Conservatives if a pact with Farage was put in place.

Banks is under investigation by the National Crime Agency over the sources of his wealth with the NCA also investigating his donation to the Leave.EU campaign.

The efforts to facilitate a deal between Johnson and Farage is effectively confirmation that the Prime Minister has now accepted he is unlikely to force a mid-October election ahead of the summit of European leaders on October 17.

With growing concern in Downing Street about co-ordinated anti-Johnson tactical voting, and the prospect that opposition parties could come close to standing down candidates in key marginals, a pact with the Brexit Party, however unpalatable, is now seen as a necessary survival strategy.

Farage recently claimed that without a deal with his party, Johnson “cannot win an election.” However, he said if there was a deal between the two parties, with clarity over where they stood on Brexit, “we’d be unstoppable.”

A new ICM poll published in the Financial Times, commissioned by the pro-remain Represent Us, only partially backs Farage’s optimism. It forecasts support for Farage’s party would double from its current level of nine per cent if a general election took place after Halloween.

The same ICM poll forecasts that a mid-October poll would see the Tories win 37 per cent with Labour seven points behind.

However, the post-Halloween forecast has both Labour and the Conservatives on 30 per cent, and Farage’s party on 18 per cent. If the poll proves to be accurate, Johnson would need to rely on a formal pact with the Brexit Party to ensure the pro-Brexit vote was not split in key seats.

The anticipated talks between the two party leaders, according to sources, will initially centre on seats where a Brexit Party challenge to a sitting Tory MP would do most damage. In these seats, where Labour and the Liberal Democrats might come close to winning, the absence of a Brexit Party candidate would assist Johnson’s efforts to remain in Number 10.

Farage is understood to have made clear to colleagues that in any pact he expects a similar sacrifice from the Tories to stand aside in a majority of strong Labour seats in the north of England where the pro-Brexit vote was highest.

Equally, a deal with the Tories could dent the Brexit Party’s claim to be the alternative to the Westminster’s mainstream. That idea is dismissed by Farage’s aides who believe their strong showing in the recent European election can be sustained at a general election.

The Prime Minister continues to claim that the United Kingdom will leave the European Union on October 31. However, the Commons backed a new law which forces the Prime Minister to seek an extension to the Brexit deadline from Brussels if there is no deal with Brussels by October 19.

Johnson has said he would “rather be dead in a ditch” than ask the EU to delay Britain’s exit.