Sergei Skripal – There's More To This Story Than Meets The Eye 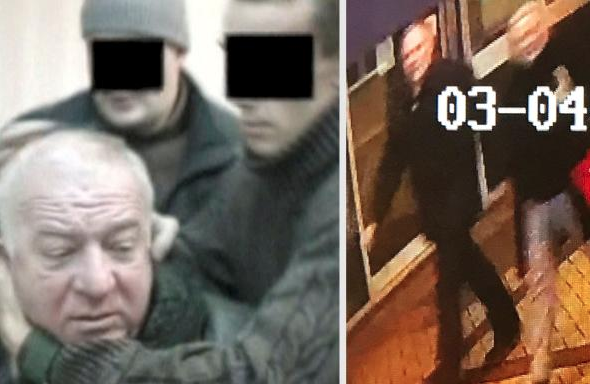 By TruePublica: As we mentioned in our report last week “What You Are NOT being Told About Russian Spy Sergei Skripal” – it should not be forgotten that Skripal is a traitor who sold the identities of dozens of Russian agents abroad to the UK, in exchange for hard cash. This may very well have caused the deaths of some of those Russian agents operating in conflict zones. Skripal is also a known double agent – or double traitor. Without doubt, Skripal had enemies, probably quite a few.
There are many permutations as to who his attempted murderer may be.
Accusations and speculation are rife, with little hard evidence being made public other than some basic details. Russia is disputing their involvement.
U.K. Home Secretary Amber Rudd said, “That forensic analysis has revealed the presence of a nerve agent and the incident is therefore being treated as attempted murder.”
While Britain has not accused any Russian state actors of involvement in the poisoning, Britain’s foreign minister, Boris Johnson, last Tuesday called Russia “a malign and disruptive force” and threatened new sanctions on Russia, if the Kremlin were found to have been responsible.
Johnson’s comment drew a Russian rebuttal. Earlier government-linked media and politicians in Russia took a defensive stance, claiming in advance that the Russian state had nothing to do with the crime.

The Russian embassy’s claim that Skripal was a “British spy working for MI6” rather than a Russian spy is based on the fact that he was a double agent working simultaneously for both the Russian and British intelligence services.

Here is a short bio of Skripal compiled by Reuters:

While the Russian Embassy’s claim about the double agent is not completely wrong, it is inaccurate to imply that Skripal was not a Russian spy, and even now there are questions surrounding Skripal’s allegiances.
Valery Morozov, another former Russian intelligence officer who now lives in exile in Britain, said Skripal was still working with Russian military intelligence.

Deepening the mystery of Skripal’s loyalties, the Telegraph newspaper claims it has obtained information that the poisoned spy was a close confidant of Christopher Steel, the British ex-spy who compiled the so-called “Trump dossier.”
Steele raised the stakes in the USA by stating that Donald Trump was vulnerable to Kremlin blackmail. Steel is a former MI6 officer who then had to disappear into hiding. He was lambasted in a highly politicized memo by the House Intelligence Committee’s Republican chair, and been referred for a criminal probe by two top Republican senators. Both the US and Russian presidents now consider him an enemy.

And there is Vladimir Putin’s infamous reaction to the 2010 exchange of a group of captured Russian “illegals” – undercover spies – living in the United States for a group of Russian intelligence agents accused of working for the West, including Skripal. Putin, who was then prime minister, said: “Traitors will kick the bucket. Trust me. These people betrayed their friends, their brothers in arms. Whatever they got in exchange for it, those 30 pieces of silver they were given, they will choke on them.” Putin was referring to the enemies that traitors like Skripal would have created.

In the meantime, the Home Secretary Amber Rudd revealed yesterday that the investigation now involved more than 250 counter terrorism police officers and more worryingly, that Britain is to raise the case with its Nato allies.
“Some big questions arise, as to how do you stand up to a clandestine and sinister attack deliberately done to play havoc in our society?”
This firm line appeared to be backed by the security minister Ben Wallace, who mentioned Britain’s “powerful allies” as he said the Government was ready to respond with “the full force of the United Kingdom’s resources”
“There are lots of things that the United Kingdom can do,” Mr Wallace threatened.  “It is a powerful country with a powerful economy, powerful allies, powerful military and powerful other capabilities – and we shall look at all those.”

On Monday, hours before it became clear that Mr Skripal had even been poisoned, Defence Secretary Gavin Williamson was telling MPs: “Vladimir Putin has made it quite clear that he has hostile intent towards this country. We have to wake up to that threat and we have to respond to it.”
Since his appointment, Williamson as Defence Secretary has been provoking Russia. He was relentlessly mocked for famously saying in January that Russia wants to “Damage (Britain’s) economy, rip its infrastructure apart, actually cause thousands and thousands and thousands of deaths” as well wanting to “create total chaos within the country.”
Russia has vehemently denied involvement in the nerve agent attack and accused British politicians of engaging in “pure propaganda”.
British security officials, however, have said the specific chemical used would have been difficult to obtain and could only have come from a state run or state-licensed laboratory.

Nerve agents including Sarin and VX are manufactured by the British Government in Porton Down, just 8 miles from where Sergei Skripal was attacked and is the largest stock of deadly nerve agents and gases anywhere in Europe.

Craig Murray, ex British ambassador even hints at something more sinister: “nor in this murky world should we overlook the fact that he must have known interesting things about his MI6 handlers. “Litvinenko II” is rather too pat and obvious, and could be a false flag set-up.”

The Times reports that “Theresa May is on the verge of publicly blaming Russia for the attempted murder of Sergei and Yulia Skripal and ordering expulsions and sanctions against President Putin’s regime.”

One other fact that the mainstream press have not mentioned is that even after prosecutors had convicted Skripal of high treason in their own country, the Russian state gave him a full state pardon, placed him on a spy swap list and was willingly freed. Hardly the actions of a state that already had him in prison for the highest of crimes and wanting him silenced. And as Time reports the “if the obvious suspects in the case are the Russian intelligence services, it would suggest a major break from the rules they are taught to follow.“

It’s still possible, of course, that Skripal did something to provoke retaliation from Moscow. The GRU (foreign military intelligence agency of Russia), of which Skripal reached the rank of Colonel, was recently implicated in the hacking of the U.S. elections in 2016. If Skripal was tapping his old sources to get fresh intelligence, rather than enjoying his retirement in silence, he could have turned himself into an target. But then, that’s what double agents do isn’t it. There’s an old saying in Britain – “if you live by the sword” – and Skripal lived on a double edged version of it.

One thing is for sure, Britain is playing an extremely high stakes and dangerous geo-political game – for what? A foreign traitor, despised by his own, passed on by America to be re-homed as part of a spy swap, with no perceptible allegiance to Britain.

There is more to this story than meets the eye.