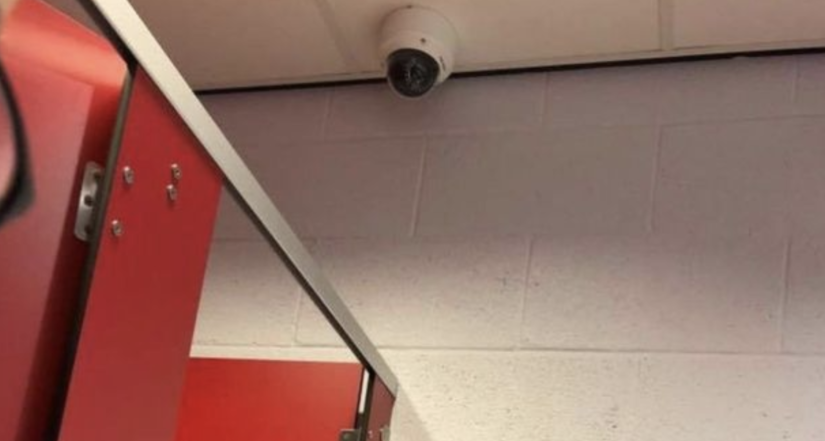 Unfortunately, it’s not a new story – toilet camera’s in school toilets or changing rooms. The excuse being used is either to stop bullying or vandalism. And just like the surveillance state intrudes on every aspect of our lives due to ‘national security’, the panopticon architecture of life in Britain is basically over-reach by the state, a self-imposed paranoia common to everyday life in Britain.

Toilets cams, no matter how much parents gasp at their discovery are not new and nothing has been done about it over the years.

Two years ago parents criticised a secondary school in Birmingham after CCTV cameras were installed in pupils’ toilets.

The BBC reported that – “Summerhill School in Kingswinford in the West Midlands claimed cameras were intended to combat bullying and vandalism. But parents said the surveillance was “intrusive” and “creepy” and some children now refused to use the toilet.”

The school said – “no cameras are directed towards sensitive areas including cubicles or urinals”. Just like the one in the main image for this article. It is a camera used in the Kinswingford school, so is the one below. 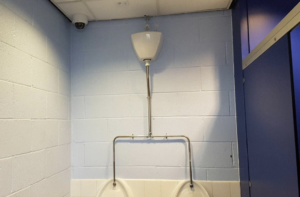 And just last week, a teachers’ union have criticised an Islington primary school after “concealed cameras” were found in its toilets.

This time, the Islington Tribune reported its concerns. The secretary for the Islington branch of the National Education Union (NEU) has said he has “serious concerns” about the Duncombe Primary School case. And the NEU was backed by Big Brother Watch, a national charity which campaigns to protect citizens’ data rights. It said that the use of cameras in toilets was becoming a worrying trend. Parents were outraged when the school in Sussex Way, Upper Holloway, first admitted that they had installed the hidden cameras five years ago without informing them.

And that’s the point isn’t it – installed without consent. From schools to shopping centres, from offices to street corners – everyone is deemed a suspect, including primary school children and therefore government bodies and agencies, such as schools deploy the tactics of the state.

But did you know that hundreds of schools are using CCTV cameras in toilets or changing rooms across the country?

Back in 2012, a total of 825 cameras were located in the toilets or changing rooms of 207 schools across England, Scotland and Wales, figures provided by more than 2,000 schools showed through freedom of information requests. That 2012 report found that:

There is an average of one camera for every 38 children in schools.

90% of schools have CCTV cameras

There is an average of 24 cameras in each of the 1,537 secondary school

The estimated number of CCTV cameras in secondary schools and academies across England, Wales and Scotland is about 110,000

The research, now seven years old, found almost one in 10 of the schools which use CCTV said cameras were positioned in toilets and changing rooms, while 54 schools have more than one camera for every 15 students.

The Director of Big Brother Watch said of last weeks news – “This is an extremely worrying discovery that will alarm pupils and parents alike.” The research from 2012 came from Big Brother Watch and they said then – “The full extent of school surveillance is far higher than we had expected and will come as a shock to many parents.”

Nothing at all has changed except parents have gone from ‘shock’ to ‘alarm’ – apparently. The state continues its non-stop privacy abuses and even brainwashes children in thinking that surveillance camera’s in toilets or changing rooms is just part of everyday life.

As an adult, would you be happy to have a surveillance camera recording you in a restaurant or workplace toilet on the basis of theft or security?

Toilet cams are not part of everyday life – they are a serious intrusion into anyone’s privacy and they are a flagrant breach of human rights in the Western world. As an adult, would you be happy to have a surveillance camera staring at you in a restaurant or workplace toilet? No, of course, you wouldn’t. And if the restaurant or employer used the excuse that it was doing so without your permission on the grounds of theft or security, it wouldn’t be a credible excuse, would it?

Out of all these reports over the years, no-one has asked why it is that schools need them in the first place because bullying and vandalism is not a credible answer, just like theft is not a credible excuse in a changing room shop. Just as important what is happening to the footage of these children? Is it stored and where? Who has access and why? When is the data destroyed and by who?

When these cases come to the news, schools have not asked parents permission and do not have published data protection policies over toilet or changing room cameras because many are installed without permission. This in itself is a breach of the law.

A support group was then set up by parents called Justice for Duncombe Children and they are demanding that the school and its previous headteacher, Barrie O’Shea, answer their questions. The school was reported to the Met Police, concluding that no criminal behaviour had taken place. Given the criticisms of the Met Police and their use of illegal surveillance technology, their response is hardly surprising.

Apparently, the school in question has refused to state who authorised the cameras and the council is “satisfied that the school has taken all appropriate measures to prevent anything similar happening again”.

In other words, the school toilet cams story will die down, no-one will take any notice and these cameras, hidden or not, will continue to be used in school corridors, toilets and changing rooms.