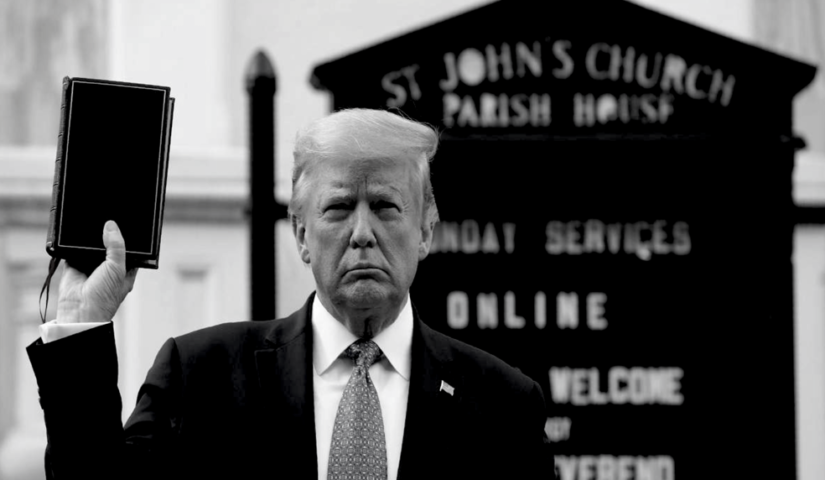 Business Insider reports that – “Intelligence and law-enforcement officials among America’s allies in Europe and the Middle East told Insider they were aghast at the heavy-handed tactics and rhetoric used by US police generally, and by the president specifically, to suppress demonstrations against police abuses of African Americans.

“It has been chilling watching the United States devolve into the same strongman-style policing and rhetoric we have been opposing together as allies in the Middle East and Eastern Europe,” a NATO military intelligence official who has deployed to the Middle East, Africa, and Afghanistan in support of various anti-terrorism campaigns told Insider.”

The source’s view is widely held. Some European officials have started to side openly with the protesters.

Although much of the reporting over the protests has focused on looting and violence – the vast majority of protests have been peaceful.

What left European partners in shock was Trump’s performance last Monday and Tuesday — in which he berated local government officials and called them “weak,” threatened to use the active-duty military to stop domestic unrest, and had security forces violently clear peaceful protesters from a church near the White House for a photo opportunity.

“Look at the critical issues the NATO alliance faces together: containing an increasingly belligerent and aggressive Russia, reducing the threat of terrorism both in Europe and the Middle East, and confronting China over its heavy-handed approach to Hong Kong,” the official said to BI.

“In each of these critical areas, Trump has responded to the protests almost exactly like our opponents in each of these fields: He refuses to take responsibility and blames outside agitators, he threatens physical force against the press, he demands harsher crackdowns on the protesters from local officials and uses the backdrop of nationalism and religion in the church stunt to look like a dictator,” the official said.

“Tell me again how the president of the United States is better than [Russian President Vladimir] Putin or [Turkish President Tayyip] Erdogan?” the official asked. “Because the view from Europe is that they’re all a bunch of undemocratic strongmen best kept at arm’s length.”

Overall, the fear is that the US president is not an ally of European democracy and that he and his administration is too politically toxic to be seen to be working with.

“Publicly everyone will be as nice as they can, but with the already tense domestic situations over COVID lockdowns, there’s little interest in using the US-EU relationship as a good thing these days,” the law-enforcement official said. “The Germans are openly done with this president. This is why [German Chancellor] Angela Merkel refused Trump’s offer to host the G7 at the White House this fall. Between her concerns, he would demand Putin be invited. It was obvious that Trump was only interested in an election-year photo op just before the election.”

“Merkel has always avoided these sorts of major political stunts, but this time it was almost insulting,” the senior law-enforcement official said. “Trump really thinks the members of the G7 would stand with him in the White House Rose Garden as he sends security forces to gas protesters outside a church? Europe has enough of its own problems. It’s not going to let itself get caught up in the blame for this administration’s sheer incompetence.”

In the meantime, Boris Johnson’s government has refused to criticise Donald Trump – is angering EU negotiators over tense trade talks, piled into the Hong Kong debate and threatened to pull the Huawei deal negotiated last January – leaving an indignant China both dismayed and furious as to the quick about-turn.

Donald Trump’s presidential hopes are, as Time magazine ironically says are now – ‘going down in flames.‘ Even some Republican stalwarts have acknowledged that Trump’s latest reaction to a national tragedy could have disastrous electoral implications in November.

Even before Floyd’s death unleashed this wave of racial unrest, the President was facing the effects of an economic and public health crises, precipitated by the coronavirus pandemic that he has mismanaged.

Boris Johnson’s strategy to combat the Covid crisis has been equally as bad – and for all of the rhetoric, the lies, misinformation – he now faces what the Director of the Reuters Institute says is the – worst fall in trust in government I have ever witnessed. (Reuters Institute latest Report on Trust in Gov’t).