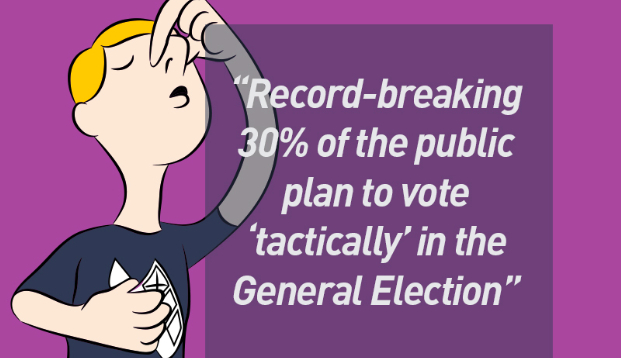 By Sabine McGinley – Polling from BMG research for the Electoral Reform Society has revealed that a record-breaking 30% of the public plan to vote ‘tactically’ in the next General Election.

Tactical voting occurs when voters choose the best-positioned party or candidate in order to keep out another party that they dislike… as opposed to actually voting for their preferred candidate.

Research carried out by BMG revealed that in the upcoming election, only half (51%) of all the electorate are likely to vote for “the candidate or party they most prefer regardless of how likely they are to win”.

It’s a sad indictment of Westminster’s voting system that people don’t feel able to vote with their heart – instead, having to second-guess each other at the polling station.

At a time when trust in politics is at rock bottom, people need to know that their vote will count, regardless of where they are in the country.

Our current electoral system is failing to progress with the times – demonstrated by the fact that 14 million voters are in seats that have not changed party hands since the Second World War.

With so many voters in constituencies where one party is almost certain to win, and unable to ‘shop around’, millions feel forced to vote tactically or else their votes are wasted.

Under Westminster’s failing system, millions of voices are left out of the debate. People who live in these areas with ‘safe seats’ – i.e. one-party fiefdoms – are continually denied the right to express their preferred party or candidate.

For all the discourse on how volatile politics is today, only a small number of voters will actually have an influence on the outcome of this next election.

But ERS are sounding the alarm for change. It is high time the next government introduced a fair, proportional electoral system and give voters the representation they deserve.

That is why this election should be the last conducted under First Past the Post, which has shut out so many voices. A shift toward proportional representation would help ensure seats match votes – and end the (often contradictory) clamour about how to vote ‘tactically’ in hundreds of seats. We could – shock, horror – begin to focus on the issues instead.

In the last election, just 70 seats – 11% of the total changed hands – a figure that’s been declining over recent years. Polling from YouGov’s MPR projection shows that December’s election could see just 58 seats could change to influence the election.

So it’s no wonder we hear so much talk over how to sway those handfuls of marginal seats.

“Being trapped with the same representation for decades is not the hallmark of a responsive and functioning democracy”notes Darren Hughes, Chief Executive of the Electoral Reform Society.

The reality is that in many parts of the UK there is not much of a contest in this election. It’s time we ended an unfair system which means that some people’s vote matters more than others.

ERS are calling for major reform of Westminster’s outdated and failing system: its time for a more fair and representative democracy.