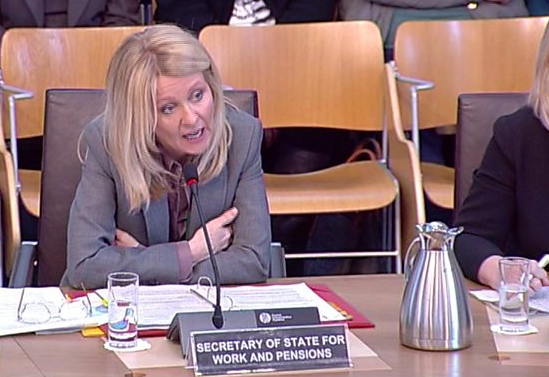 By TruePublica: If we no longer care what’s true in politics, there is the probability that elections will become meaningless. And whilst it is true we have always tolerated a certain amount of deceit in politics, lying to parliament seems like just another day in British politics for some.

Esther McVey is one of those politicians whose mendacity towards representative politics is matched only by her indifference to the very people she is responsible for as Secretary of State for Work and Pensions – many of whom are genuinely vulnerable people.

One only has to read the letter sent from Sir Amyas Morse, who is in charge of the rigorously independent National Audit Office (NAO), reprimanding Esther McVey for her misinformation and downright lies. Morse is an officer of the House of Commons and in turn reports to the Public Accounts Committee, a select committee of the House of Commons. His choice of language against McVey is rare indeed for a civil servant of his standing.

Below is a copy of an email sent from Mo Stewart, a British disabled war veteran that spells out the sheer frustration and anger of the political fabrications about Universal Credit, highlighting the Secretary of State for Work and Pension’s scale of callousness that defends a fatally flawed ideology, described rather charitably by the NAO as “a department unsympathetic to claimants.”

It’s not that long ago since you knowingly ‘misled’ parliament and were permitted to continue in office, for reasons few people can justify.

Even ‘The Times’ identified and published the letter from Sir Amyas Morse, the Auditor General, where you were accused of “lying”.

Calls for your resignation are not unknown as you were identified as misleading the House of Commons, but your unjustified claims continue.

Yet, undeterred, you felt the need to not only knowingly mislead the Conservative Party Conference, but also the British people – many of whom have suffered due to the ongoing savage brutality of the Department for Work and Pensions (DWP). See attached seminar talk, recently delivered at Liverpool University.

Your claim that all those statements via social media from those suffering due to DWP policies which has cut financial support to those in greatest need are “fake news” is below the belt, even for you. Trying to mislead people by dismissing the preventable harm created by the welfare ‘reforms’, and insisting that spending on disability has increased is fooling no-one.

You are making such a fool of yourself given the vast amount of published evidence, by top academics as well as sick and disabled claimants, which demonstrate the unnecessary preventable harm created by DWP policies, with a claim to need to reduce costs seemingly regardless of inevitable human consequences when using a fatally flawed assessment that has failed all academic scrutiny, and was adopted following the influence of the second worst insurance giant in America.

You are fooling no-one claiming that more is spent now on disability benefits than in the past. It was always going to be regardless of government.

That fails to take on board the deaths, despair and suffering identified when successfully terrorising sick and disabled people who are unable to work, despite relentless DWP coercion and intimidation.  As for the numbers of former disabled claimants who are now in work – how many are on zero hours contracts which offers no security whatsoever?

No matter how hard you try, you can’t disregard the many thousands of deaths linked to the Work Capability Assessment (WCA), Ms Mcvey, and it really is foolish of you to try as you treat those attending Conference with the same contempt with which you treat the sick and disabled community.

The last published ESA mortality totals publishing figures of those being found ‘fit for work’ following a WCA, identified 80 sick and disabled people per month dying after being declared ‘fit for work’ by the DWP.

WHY will the DWP not publish these latest updated mortality totals, other than the fact they don’t want to identify the latest numbers of sick and disabled people who’ve died after being declared ‘fit for work’ by the DWP, following the fatally flawed WCA, which adopted the American designed ‘disability denial’ method of assessment.

You continue to disregard Coroner’s reports linking the WCA to suicide. You disregard published, peer-reviewed academic papers that demonstrate the mental harm created by the ongoing welfare reforms and austerity measures, and you disregard the fact that the DWP commissioned ‘research’, used to justify the adoption of the BPS model for the WCA has failed all academic scrutiny. You are very unwise to suggest that chronically ill and disabled people who live in fear of the DWP are ‘lying’, Ms McVey, which is the true meaning of your terminology of “fake news”.

Your confidence demonstrates the personal self-glorification you have adopted since being appointed as Secretary of State for Work and Pensions, and I believe it is time that the Parliamentary Commissioner for Standards should be alerted to the unacceptable conduct of a Secretary of State who deliberately misleads the public to grab the headlines, which causes preventable harm to many.

You have offended so many that the charities delivering the DWP’s work programme are in an unenviable position and  ‘must promise not to attack McVey’.

Ms McVey, your conduct as Secretary of State is unacceptable and, like many others, I believe you are totally unfit for the office you now hold.

Fellow, the Centre for Welfare Reform