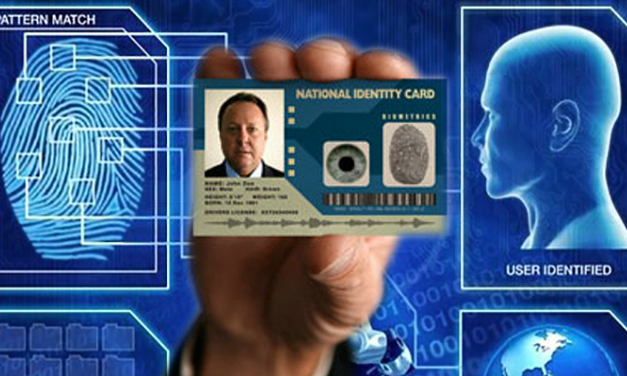 By TruePublica: Two weeks ago, the right-wing think tank called Policy Exchange, created in 2002 and based in London and described as “the largest, but also the most influential think tank on the right” was attributed by the mainstream media in its numerous reports to introduce national ID cards after Brexit. The excuse it was using was to avoid another Windrush-style scandal. It then suggested that the ID system is extended to every single individual in Britain, which would inevitably be a security and civil liberty disaster for every citizen in the country.

Given the catastrophic failure of central government and its agencies to contain huge data hacks and data losses, the implementation of a national ID system, one that contained biometric information would be especially dangerous for two reasons. First, the database, detailing all sorts of sensitive personal information would be a hackers paradise. The government would, as with all other databases fail to secure it properly. Second, Britain is already described by the United Nations as an “endemic surveillance state.” The dividing line between what currently exists and national ID cards would put Britain firmly into the West’s first techno-Stasi state – the equivalent of an electronic concentration camp.

The think tank proposes that the ID card would allow those who qualify, access to state services such as healthcare and social services. At first, it only extends to identifying legal and illegal immigrants. But why then, should all citizens of Britain be forced to have national ID cards?

The next step is a short and dangerous one. It’s about behaviour as the government sees fit. For those that don’t behave, the graded denial of state services would be the penalty. This is already being trialled in China. Currently, any person involved in non-payment of state fines in China (in the pilot that covers tens of millions of citizens) is denied access to certain state services – all the way up to being refused flights both domestic and international. The purpose is to roll out a nation-wide system that includes collating data from social media, online activity and even subscriptions leading to any form of dissent, protest or oppositional opinion becoming a crime against the state.

Don’t forget, it was a conspiracy theory just five years ago to say that the government in Britain was watching you – that was until Edward Snowden revealed the truth in 2013 when we found out the extent of their surveillance architecture. As a reminder, they took metadata of your online activity, took images of you and your family, stole personal details such as banking, financial and health information, who your friends and relatives are, what political and sexual preferences you have – and then stored it all – illegally. It still does.

By BigBrotherWatch: It is disappointing to see Policy Exchange’s attempt to revive the tired and failed idea of a national ID scheme. The British public has made clear time and time again that we don’t want ID cards, ID numbers, or centralised databases of highly sensitive information about us.

A national ID scheme would be dangerous, expensive, and would fail to meet the aims its proponents claim it would. ID cards are not a magic bullet solution to solving a broken immigration system or rising crime – yet they are periodically touted as such by those in the establishment that refuses to accept the public’s reasoned rejection of ID cards.

Calls for a national ID scheme are calls for a giant centralised database with a file on every person in the UK that could include records about our health, tax, travel, benefits, religion, and even fingerprints, faceprints and voiceprints. To a free society, this sets off major alarm bells – and so it should.

Big Brother Watch stands up for people’s rights to be free from a database state and we believe information should only be held about citizens where there is a clear purpose or where they have consented. That is why we fight against the state’s troves of 12.5 million facial recognition photos, 5 million voiceprints, 20 billion ANPR (automated number plate recognition) records – and much more.

If those giant, uncontrolled and likely unlawful databases were centralised – with each citizen given a barcode-like ‘ID number’ – we’d have a much bigger issue on our hands.

In 2010, Theresa May scrapped the ID card scheme, pointing out that it would have increased “state control over decent, law-abiding people” and would have been “intrusive” and “ineffective”. Then Deputy Prime Minister Nick Clegg agreed that a national ID scheme would be “wasteful, bureaucratic and intrusive”.

In this current climate, there are few areas in politics where there is consensus – but the British public’s preference for freedom over an authoritarian national ID card scheme might just be one, and we should all feel reassured by that.