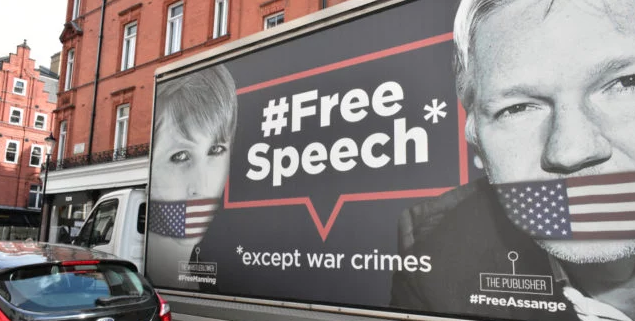 If a Russian opposition politician were dragged out by armed police, and within three hours had been convicted on a political charge by a patently biased judge with no jury, with a lengthy jail sentence to follow, can you imagine the Western media reaction to that kind of kangaroo court? Yet that is exactly what just happened in London.”

Jonathan Cook – award-winning journalist: “Remember that all of the information contained in the US charge sheet against Assange – the supposed grounds for his extradition – were known to the previous Obama administration as far back as 2010. But Barack Obama never dared approve the current charges against Assange because legally there was no way to stop them being turned against “respectable” journalists, like those at the New York Times, the Washington Post and the Guardian.

This was the same Obama administration that had the worst record ever for prosecuting whistleblowers. Obama was no friend to investigative journalism but he understood that it would be unwise to so overtly subvert the notion of a free western press.

That the Trump administration has cast all this aside to get Assange behind bars should have every journalist in the world quaking in their boots, and loudly decrying what the US is seeking to do.

And yet the reaction has been either quiet acceptance of the US extradition request as a simple law enforcement measure or gentle mockery of Assange – that the scruffy outlaw dragged from the embassy was looking even scruffier after seven years of extreme house arrest and “arbitrary detention”. What a laugh!

Now we can see how the media is going to collude in a narrative crafted by the political class to legitimise what the Trump administration is doing.”

John Pilger – award-winning documentary film-maker “The action of the British police in literally dragging Julian Assange from the Ecuadorean embassy and the smashing of international law by the Ecuadorean regime in permitting this barbarity are crimes against the most basic natural justice. This is a warning to all journalists.”

Charles Glass – US/UK journalist, broadcaster and publisher: “And so Assange waits to know whether he will ever be free again, while journalists who published his leaked documents continue working without fear of prosecution and, in some cases, brandish their journalism prizes while denouncing the man who made them possible.”

Even John Oliver – political commentator, show host – “And while it is still early at this point, and we don’t know what else Assange might be charged with—or even if the U.K. might extradite him at all—this story is worrying for a number of reasons,” he argued. “One, because journalistic freedoms may be under threat; and two, unfortunately, in order to protect them, we may be forced to utter the one phrase in the English language scarier than ‘Halloween Brexit,’ and that’s: ‘I’m really sorry, everyone, but it might actually be time to defend Julian Assange.’”