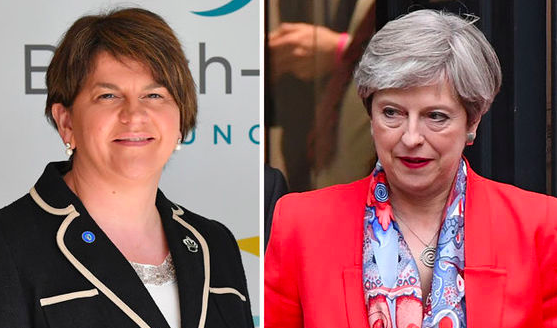 By Craig Murray: Tories Leap Into the Unpopularity Abyss – The official Conservative party spokesman, Laura Kuenssberg, has just announced that Theresa May will remain as Prime Minister, supported by the Democratic Unionist Party in Northern Ireland. Now the DUP are probably the most unpleasant bunch of individuals in organised politics in the UK. The “No Surrender” arch protestant bigot party founded by Ian Paisley.

It is fascinating that, after an election in which the Tories and their mainstream media acolytes attacked Jeremy Corbyn at every opportunity for his alleged sympathies with the IRA, the Tories have come to an arrangement with a party that was from its inception and still is the political wing of the loyalist terrorism. The mainstream media never even mentioned the existence of Loyalist terrorism during its sustained attack on Jeremy Corbyn.

The loyalist terrorists murdered 1,016 people in the period 1969-2001. They shot someone dead in a supermarket car park in an internecine dispute actually during the election campaign. In all the media attacks on Corbyn about the IRA, there was no acknowledgement that Loyalist terrorism even existed. I think we can be pretty certain that the media are not going to start digging into the terrorist links of the Tories’ allies now. But social media is going to discredit them.

The DUP are corrupt, homophobic, racist and above all religious bigots of the worst kind. The nastiest people in politics. The utterly discredited Theresa May refuses to resign and intends to continue to rule over us with the support of this ugly faction. Popular support for the Tory government is going to plunge to unprecedented levels. This gruesome malformation of a bigots’ alliance between Brexiteers is not going to last long as a government, and the popular retribution will be massive.

Craig Murray is an author, broadcaster and human rights activist. He was British Ambassador to Uzbekistan from August 2002 to October 2004. He joined the Foreign and Commonwealth Office and held various positions of seniority from London to West Africa.